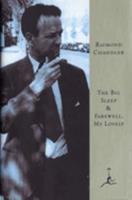 The Big Sleep & Farewell, My Lovely

These two classic novels featuring private eye Philip Marlowe made Raymond Chandler's name synonymous with America's hard-boiled school of crime fiction. The Big Sleep was an instant success when first published in 1939. It centers around a paralyzed California millionaire with two psychopathic daughters; he involves Marlowe in a case of blackmail that turns into murder. Farewell My Lovely , which Chandler regarded as his finest work, came out the...

Published by Thriftbooks.com User , 13 years ago
Nearly seventy years after it was published, The Big Sleep is still an interesting detective story with an intriguing style. This was Raymond Chandler's first published novel and it made him a celebrity. In an old interview I read somewhere, Chandler said he was going against the grain of the then-popular British detective novels that climaxed with the gathering of all the suspects into a single room while the detective revealed his brilliant solution to the crime. He meant Philip Marlow to be a more realistic and gritty detective. He succeeded. Marlow became America's favorite private eye, both in print and on the silver screen. As I read the book, two thoughts came to me. First, the Chandler style has been copied and parodied so much, that you can easily forget that this was the original. The second is that although the novel was written at the time as a modern story, it now reads like someone wrote it today as period literature. This adds to the book's charm, sort of like the Chinatown or The Sting. Raymond Chandler goes in and out of fashion, but if you want to curl up with a good mystery written by one of the masters, you can't go wrong with The Big Sleep. The Shut Mouth Society The Shopkeeper

The original detective noir genre that started it all

Published by Thriftbooks.com User , 16 years ago
Raymond Chandler, the author, is the definitive writer of the detective genre. His wise-cracking, earthy detective Philip Marlowe constantly sticks his nose into dangerous places, sometimes catching the far end of a swinging fist for his troubles. And trouble is a euphemism for his working life. His books led to the creation of several famous films with Humphrey Bogart playing Marlowe. But having seen the movies, there is no comparison to the quality of Chandler's original prose. Here are a few witty samples full of imagery from his books: "I was neat, clean, shaved and sober, and I didn't care who knew it." "I was as empty of life as a scarecrow's pockets." "... he looked as inconspicuous as a tarantula on a slice of angel food." "He looked as nervous as a brick wall." Chandler's stories move fast and contain a lot of action, just like his protagonist. Marlowe's character is a bit of a blue-collar cynic, an occasional ladies' man, a rebel, and a steadfast (but sometimes puzzlingly) honest man. Marlowe is just an average guy who just happens to solve cases involving the rich and beautiful (and their dirty little secrets) in mid-twentieth century LA. And I suppose Marlowe's fast-talking, action-oriented character is one most of us average guys could identify with, which accounts for the success of his books. I thoroughly enjoyed this book - I don't usually like reading fiction - and highly recommend it. Chandler really is a pleasure to read. Why couldn't we have read something like this just once in my high school English lit classes!?

The best place to start if you're a Chandler novice

Published by Thriftbooks.com User , 18 years ago
Seeing as how "The Big Sleep" and "Farewell, My Lovely" are the first two Philip Marlowe detective novels that Raymond Chandler wrote (published in 1939 and 1940, respectively), this is a grand place for a Chandler novice to begin pursuing the morally decrepit alleys and boulevards of the rich and not-so-rich in Los Angeles.One thing you should note is that Chandler held the conventional detective stories (think: Agatha Christie) in disdain. Ergo, any attempt of mine to barf back the plots to you is a waste of time. They are so complex that you often forget exactly what happened shortly after you finish reading the books themselves...which doesn't detract from their quality whatsoever mind you. It's been told often enough that after their publication, Chandler often didn't even know what was going on in his own novels!Suffice to say that both books concern murder among the wealthy elites in L.A. during Chandler's life--a time when the city was a lot smaller than its present size, and more hostile to outsiders--particularly to people of color. "The Big Sleep" concerns a disappearance and a reclusive millionaire and his two daughters (one is a mentally deranged nymphomaniac; the other is a bit more sensible, but no less shady) and the lengths he'll go to protect them. While this isn't the best Marlowe novel, this is probably the best place to start. Plus, it got made into a pretty good movie starring Bogie and Bacall."Farewell, My Lovely" is perhaps the most politically incorrect of the Marlowe books. It starts off with a murder at a bar in South Central L.A. and extends its tentacles into jewel heists and gambling rings where it is difficult to ascertain exactly who is doing what to whom. In Chandler's L.A., nothing is what it seems.The story itself is engrossing, however, you must prepare yourself for Marlowe dropping the "N" word at least once, and his mockery of an American Indian for speaking in pidgeon English. Remember that this was 1940 and was 25 years before the Watts riots began to put an end to the white-dominated old boys network that used to rule L.A. That in itself makes it an interesting look at the mentality of the powers at be (the wealthy, the LAPD) and see how much has changed since Chandler's day...and how much hasn't.My personal favorite of Chandler's books is "The Long Goodbye"--the second-to-last Marlowe novel that was published in 1954. I would rank both of these books below that one, but "Farewell, My Lovely" is a close second, while "The Big Sleep" is an auspicious debut for the hard-boiled, cynical, yet romantic ... For those who are willing to take more than a passive interest in the works of Raymond Chandler, this two-book set is an excellent place to start. Furthermore, for those who are merely casual Chandler fans, this set is great because these two books are among his best (and it looks nice on your bookshelf too!)

Not just a mystery writer....

Published by Thriftbooks.com User , 23 years ago
Raymond Chandler was not just a mystery writer, but a keen observer of the human condition. In this edition, two of his Philip Marlowe novels are collected in one volume. These stories are positively ALIVE with atmosphere and characterization. Dont miss these novels, as a great introduction to Chandler's work. You can feel the emotions boiling under ther surface of these characters, especially Marlowe, an honorable man in an increasingly dishonorable world. Not to be missed!

Published by Thriftbooks.com User , 24 years ago
You don't have to love Los Angeles in its golden era of the 40's and 50's, but it sure helps as Chandler barrels his way through non-stop plots filled with twists and turns that make Mulholland Drive look like a country lane through old Pasadena. None of the films ever equalled the vibrancy of the printed word from this mystery master's old Remington. The tough cops on Chandler's Los Angeles Police force make wimps out of today's version of the same. Then there's the women -- all character and rarely moral -- but each will fascinate. These are the landmark works of the author and the genre. Read 'em and wish for a time machine! Phill Catheral
Copyright © 2020 Thriftbooks.com Terms of Use | Privacy Policy | Do Not Sell My Personal Information | Accessibility Statement
ThriftBooks® and the ThriftBooks® logo are registered trademarks of Thrift Books Global, LLC