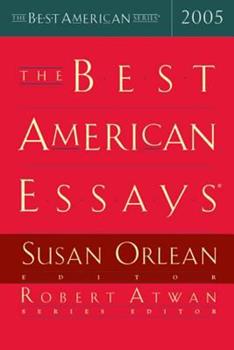 Now in its twentieth year, this "consistently refined and lively series" (Booklist)still highlights "the best that the form can be" (Philadelphia Inquirer). Editedby the best-selling writer Susan Orlean, this year"s collection highlights lively and provocative writing for these difficult times. Contributors include Roger Angell, Andrea Barrett, David Sedaris, Holly Welker, and others.

Published by Thriftbooks.com User , 15 years ago
Guest editor Susan Orlean has served up an anthology of essays that emphasizes intelligent, well-written, powerful works that leave an impression long after one finishes reading them. There is a definite New York / Northeast intelligentsia bias in her selections, and for some reason dogs and cooking appear repeatedly as subjects, but aside from these quirks I feel she has performed her job admirably, and created the strongest volume over the past four years of this series (which is how long I've been reading it). There are more than a few memorable essays in this volume. The most memorable essay is also the most maddening, Mark Greif's "Against Exercise". One hopes that Greif wrote this essay as an intellectual exercise, similar to an assignment in a debating society in which one has to create winning arguments for a position that is directly opposite one's own beliefs. Greif's essay is entirely one-sided, and he does an incredible smear job against a practice (exercise) that would certainly benefit the country as a whole if more Americans did it regularly. I was almost compelled to write a rebuttal, but refrained from doing so on the hope that Greif was just kidding. Memorable, well-written essays that were enjoyable as opposed to maddening included: -- Roger Angell's "La Vie en Rose": a beautiful reminiscence of the author's taste of "the good life" among the elite in post-war Europe. -- Paul Crenshaw's "Storm Country": a powerful first-person account of what it is like to live in Tornado Alley in Arkansas. -- Jonathan Lethem's "Speak Hoyt-Schemerhorn": an engaging essay about, of all things, a subway station in Brooklyn, whose history mirrors the changing times of the city and society. -- Oliver Sacks' "Speed": a detailed account of the nature of speed and time, and how it is perceived differently by different people, plants and animals. -- David Foster Wallace's "Consider the Lobster": an account of the Maine Lobster festival that turns into an exposition of the author's moral struggles with consuming lobsters and meat. The three duds, and the reasons I feel they are duds, are: -- Michael Martone's "Contributor's Note": other authors may identify with Martone's neurosis, but this short essay is inconsequential and forgettable. -- David Masello's "My Friend Lodovico": very narcissistic, although instead of staring into a mirror, the author stares into a painted portrait. -- Sam Pickering's "Dog Days": self-indulgent navel gazing by an opinionated know-it-all. Others will no doubt have a different list of hits and misses, but the 2005 Best American Essays contains much to nourish the mind.

Published by Thriftbooks.com User , 15 years ago
Perfect book for vacation reading or for introducing others to what an essay can be. Wide variety of essay styles, and none of them call attention to themselves as actually being "essays."

Published by Thriftbooks.com User , 15 years ago
I sympathize with the worthy aims of this compilation. It would be shame for such magnificent pieces of writing to remain ephemeral, never to be aired outside the pages of magazines. Yet the mixture is indigestible. I found it hard to read it through and shift my moods. It was like eating through a buffet table. Probably reading through it is the wrong way to do it. You should browse and pick on one that interests you, but that's exactly what you do at the newsstand or thumbing through a magazine, and that's where I'm afraid these belong. Two of the best essays for me were the Foreword and Introduction by Susan Orlean and Robert Atwan,which discuss the place of the essay in modern literature. The reason the they were the best was because they caught and held me at the moment where I was deciding whether to read a book of essays. That's the point I'm trying to make. Maybe I'll come back to David Foster Wallace's essay next time I'm deciding whether to eat lobster or to Paul Crenshaw's next time there's a tornado warning. Meanwhile I'll keep up my subscriptions to the New York Times, The Times Literary Supplement, Asimov's and Antioch Review and pick up the Atlantic and New Yorker at Penn Station and I'll feel I've done my duty by the essay.

Published by Thriftbooks.com User , 15 years ago
It's true that six of the twenty-five essays here were previously published in The New Yorker and that guest editor Susan Orlean is a staff writer for The New Yorker. But you don't have to work for The New Yorker to think that it, along with Atlantic Monthly and Harper's Magazine, contain the best essay writing in America today. I think it would hard for any guest editor to go too far wrong, given that the assignment is to pick twenty-five essays from one hundred that have been selected by the Series Editor and his staff from the hundreds of essays submitted. Presumably, any twenty-five would be pretty good. The subject matter in Best American Essays 2005 is all over the place. There are essays about hummingbirds, diagramming sentences, forgetfulness, and robots. I start all the essays and end up skipping or skimming about half. But the half that I do read are what essays ought to be, thoughtful pieces of writing that make you think, and maybe even change the way you think. Some of the grabbers in this volume are Oliver Sacks' mind-bending Speed, about how we perceive time; Cathleen Schine's Dog Trouble, a remarkable narration about how she dealt with her psychotic dog; Jonathan Franzen's The Comfort Zone, about his childhood fascination with Charles Schulz and Peanuts; and David Foster Wallace's Consider the Lobster, examining lobsters from more angles than you thought possible, all of them riveting. One of the things I enjoy most about anthologies like this is that I can re-read old favorites like David Sedaris and Oliver Sacks, as well as find writers whose work is new to me. I'm delighted to find, just as I've finished reading Consider the Lobster, that David Foster Wallace has a new collection of his essays out that is going right on my to-read list.

a relatively diverse grouping for the Best American Series

Published by Thriftbooks.com User , 16 years ago
I thought Orlean did a pretty good job of including a lot of work that wasn't in the major magazines. Compared to some of the other editions of this series, she actually seemed to have read a range of material.
Copyright © 2020 Thriftbooks.com Terms of Use | Privacy Policy | Do Not Sell My Personal Information | Accessibility Statement
ThriftBooks® and the ThriftBooks® logo are registered trademarks of Thrift Books Global, LLC