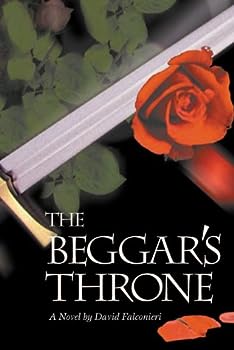 With the confidence of a master storyteller and the precision of a trained historian, David Falconieri weaves together an intricate tale of honor, treachery, power, and intrigue in The Beggars Throne.... This description may be from another edition of this product.

A gripping saga of Machiavellian manipulations

Published by Thriftbooks.com User , 17 years ago
The Beggar's Throne by David Falconieri is a superbly written historical novel set against the background of a lethal struggle for control of the British throne during the early years of the reign of Edward IV. A gripping saga of Machiavellian manipulations, skillful intrigue, veiled words and ruthless thuggery, The Beggar's Throne is an exciting story that draws one in to a rapture of criss-cross motives and keeps one guessing until the last page. Highly recommended.

A successful piece of historical fiction

Published by Thriftbooks.com User , 22 years ago
Alright, first to take into account my general reservations toward historical fiction when I am into the period. And, of course, the fact that Warwick (whom I greatly admire) is the villain doesn't help. *grin*However, that said, there were quite a number of aspects that I really enjoyed. First of all the run down, The Beggar's Throne follows the early years of Edward IV from days before Wakefield until slightly after Tewkesbury. Besides the political stuff (which Falconieri does deal with as part of the story rather than externally), he also uses a family of Yorkshire Millers as a second interweaving story (one becomes a member of Edward's personal guard, another who marries into the family was with Rutland when he dies, a third supports returning the Percies to the Earldom of Northumberland, etc...). Probably due to my own preconceived notions of the personalities of the main players of the Wars I did prefer this secondary story (of course it helps that in the secondary story I didn't know exactly what was going to happen *grin*). Falconieri does a very good job with the history. Caught me on one point actually...I could have sworn that Montague had Northumberland taken away from him _before_ the Robin of Redesdale incident. There are a few omissions which are understandable as they make Edward less sympathetic of a character (for instance the taking of the Great Seal from the Archbishop of York, when York was ill and Warwick was in France). I only noticed one historical error of any note which was that Falconieri combines Robin of Redesdale and Robin of Holderness into the same person and the same uprising. I found Warwick to be pretty dry and 2-dimensional, but there were some other characters that definitely made up for it. In particular I was fond of his portrayal of King Henry VI. Rather than a completely garbled madness, Falconieri chooses instead to give him a prophetic madness (actually making him one of my two favorite characters in the book). Henry gets to do a lot of foreshadowing in this way which makes him very entertaining to me. All in all I found the book enjoyable and very readable. Again taking into account my natural reservation toward fiction in this time period, I would nevertheless recommend this one to Edward fans, or anyone looking for a readable fictional account that is mostly accurate (he did his homework) and entertaining.
Trustpilot
Copyright © 2022 Thriftbooks.com Terms of Use | Privacy Policy | Do Not Sell My Personal Information | Accessibility Statement
ThriftBooks® and the ThriftBooks® logo are registered trademarks of Thrift Books Global, LLC