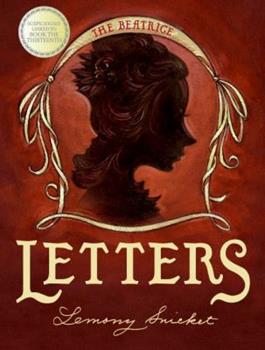 The Beatrice Letters [With Poster]

(Part of the A Series of Unfortunate Events Series)

Top secret--only for readers deeply interested in the Baudelaire case. How I pity these readers. With all due respect, Lemony Snicket

Don't Read Below My Review

Published by TheMamaBear3 , 5 years ago
Don't Read Below this review. I was disappointed to see two comments below had Spoilers of the Beatrice Letters book! Will still order in the hopes I forget what I read....but saddened that people ruined it partially. 😕 Will rate for real later!

Published by Thriftbooks.com User , 16 years ago
If there's anyone on your gift list unlucky enough to own the entire series of unfortunate events, you may wish to inflict further adversity upon them by purchasing this additional volume for their collection. Not so much a book as a mystery contained between hard covers, this most attractively presented publication contains two folders, one with a large two-sided poster filled with clues, and a notebook containing correspondence exchanged between a guy named Lemony Snicket and what seems to be two people named Beatrice Baudelaire, one of whom claims to be a fourth Baudelaire sibling. The letters begin before The Bad Beginning and end sometime after The End. It soon becomes evident that the notebook contains many clues, and from the cover we learn that these clues are "suspiciously linked to Book the Thirteenth". The most obvious puzzle is the anagram using the punch out letters, but there's no way in heck that anybody's going to ruin the notebook by actually doing that. There are several solutions to the anagram, two of which contain names, the simplest one seeming to tie in with the poster illustration, and the other one connected through the correspondence. Even the cover has an illustrated surprise which could also be a clue. Conspiracy buffs will have a field day with this one, which is a lot trickier that it looks. For instance the occupation "baticeer" (someone who trains bats) won't be found in the dictionary, and the poem "My Silence Knot" is also a puzzle. It's highly unlikely that I'll be any closer to revealing any secrets by the time "The End" comes out next month, so I guess I'll just have to wait and see. In the interim, this one gets full marks for originality and presentation. Amanda Richards, September 17, 2006

THE END IS NEAR

Published by Thriftbooks.com User , 16 years ago
The end is near. Followers of "A Series of Unfortunate Events" know that the thirteenth, and last, book of the series, titled "The End", is out on the thirteenth day of the tenth month on the fifth day of the week. A confusing phrase which here means: Friday, October 13th, 2006. Lovers of the series have devoured each book and Lemony Snicket, the series' elusive author, has earned himself quite a following. A phrase which here means a LOT of happy readers who like to devour every word the author writes in hopes of solving a complicated mystery. Why they would amuse themselves with the trivialities and misfortune that befalls the Baudelaire Orphans is beyond me. Horrible things happen to these lucky children: Their house burns down, they lose their parents, they get taken in by a nefarious criminal, Count Olaf, who tries to take their massive fortune. And that's just the beginning of their woes. But Lemony Snicket, chronicler of the lives of the Baudelaire Orphans, has also earned himself an air of mystery. Here which means a confusing situation that may or may not be solved with the help of bloodhounds on a cloudy day. Little is known about the elusive author and littler still of his great love: Beatrice. Each of the twelve books has been dedicated to her in some way. "The Penultimate Peril," Book the Twelfth in "A Series of Unfortunate Events," is dedicated to her thusly: For Beatrice- No one could extinguish my love, or your house. Thus we come to: "The Beatrice Letters." Here we have a File Box of information. A phrase, which here means a book that opens to two file folders, holding a double-sided poster with clues and the letters themselves, carefully bound in tape. There are letters to Beatrice from Lemony and to Lemony from Beatrice. All through out them, codes abound. Cryptograms appear galore; sprinkled through out a collection of business cards, file photographs, telegrams, poems and letters written on scraps of paper, we learn of a love affair between Snicket and Beatrice, who claims to be a fourth Baudelaire sibling. A love blooms between them in their search for Violet, Klaus and Sunny. And mayhap we learn a few secrets along the way. But these are not just your normal letters. In fact there are Letters encased in amongst the letters, which is to say there are punch out Letters with which you can make many names. Snicket says of these punch out Letters at the end of the letters: "For many years I thought if I collected all these letters and their accompanying ephemera--a phrase which here means "documents and items which I feared had vanished, and may soon vanish again"--I could put all of them in the proper order, as if solving an anagram by putting all of the letters in the right order. But letters are not letters, so the arrangement of letters is not as simple as the arrangement of letters, and even if it were, the arrangement of these letters could spell out more than one thing..." The only problem with the Le

Published by Thriftbooks.com User , 16 years ago
I'm sure no readers used to Snicket's enigmatic style will be surprised at how familiar this book will ring. How expected, to have some questions answered only to discover so many more mysteries we weren't even aware of! What's the elusive Beatrice's identity? And for those of us who already know, why are so many strange contradictions surfacing the further we read? Is there something more to what we suspected? Of course there is, and we can only hope the last book reveals all. There are, however, some who think the clues are all there, if they could only put them together the right way. Does Lemony really know all he says? Or will 'The End' contain a dead ringer, a shipwreck, and several missing persons? You'll have to read the book to find out, and even then, no promises. Just remember to keep your eyes - and ears - open for clues. Some things that seem ordinary, if you're paying attention, should set off some familiar bells in your head.

Published by Thriftbooks.com User , 16 years ago
I think I can safely say that the Series of Unfortunate Events is the only series I've read where the author's mysterious story might be even more intriguing than the actual storyline. This book is cleverly set up, complete with punch-out letters that spell out something important! There is also a very suspicious-looking two-sided poster. This book takes a few reads and a bit of piecing together, which makes it a lot of fun. There are still some things I need to figure out. You may want to take some notes while reading these letters... The humor is more subdued in this companion to the series, but Lemony Snicket's reply to Beatrice's 200-page book made me laugh. The whole presentation is both funny and kind of sad...like the books themselves. In other words, this book is worth the buy.

Published by Thriftbooks.com User , 16 years ago
Anagrams and anagrams. This series loves anagrams. This book raises more questions than it answers, but it only heightens the anticipation of the thirteenth book, "The End". We see a different side of Lemony Snicket, both in his letters to Beatrice and Beatrice's letters to him. We also see different *sides* of Beatrice. I haven't been following the clues as closely as many readers have - because there are so, so many - but there was one particularly interesting revelation here. At least a *possible* revelation. Without spoiling anything, I feel safe in saying that not everyone involved may be quite as "adult" as they seem. Then again, perhaps not. Frankly, it's fascinating. Others have commented on the physical design of the book, so I'll not bore you with that repitition. This is a quick read - unless you want to try and put all of the pieces together. If that's what you're in the mood for, and I highly reccommend it, get a pot of coffee (if your Mom or Dad will allow), a pen, and a commonplace notebook. It's an all-nighter. If you're adept at anagrams, it may be considerably quicker, and the coffee might not be necessary. I've read adult mysteries that were easier to follow; read enormous, overlong, and tremendously complex fantasy series that are nearly impossible to follow (Robert Jordan's comes to mind). That a book aimed at young adults (9-12) is so involved, and involves so many adults (like myself) is truly a testimony Daniel Handler. I really have to wonder exactly what is going on in Handler's mind, especially considering the other books he's written - two not specifically for younger readers. It must be an interesting, no, *fascinating* place. He seems a bit like Willy Wonka, if Wonka were an author. To me at least...you don't need to agree.
Trustpilot
Copyright © 2022 Thriftbooks.com Terms of Use | Privacy Policy | Do Not Sell My Personal Information | Cookie Preferences | Accessibility Statement
ThriftBooks® and the ThriftBooks® logo are registered trademarks of Thrift Books Global, LLC