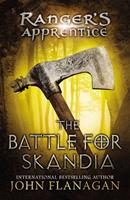 The Battle for Skandia: Book Four

(Book #4 in the Ranger's Apprentice Series)

The international bestselling series with over 5 million copies sold in the U.S. alone ! Still far from home after escaping slavery in the icebound land of Skandia, young Will and Evanlyn's plans to return to Araluen are spoiled when Evanlyn is taken captive. Though still weak, Will employs his Ranger training to locate his friend but soon finds himself fatally outnumbered. Will is certain death is close at hand, until Halt and Horace make a daring...

Published by Thriftbooks.com User , 14 years ago
Spring arrives at the cabin high in the Skandian mountains where Evanlyn and Will have wintered. Will has shaken his addiction to the insidious warmweed, and Evanlyn has become comfortable with her new survival skills. One day she goes out to check their traps and does not return. Will, still weakened from the brutal life of a Skandian yard slave, goes looking for her, and their adventures begin --- again. John Flanagan's Ranger's Apprentice series began four books ago with THE RUINS OF GORLAN, about a young boy who is chosen to train to become a Ranger. Rangers function as their kingdom's intelligence-gathering agency, border patrol and guerrilla fighters. They are skilled in stealth, woodcraft and marksmanship. Their acutely trained reflexes, along with their tracking skills and the ability to go unnoticed in almost any environment, give them a reputation that borders on the uncanny. Initially, Will is disappointed not to be chosen for his kingdom's Battle School, where the knights of the realm are trained. But his respect and affection for Halt, the ranger to whom he is apprenticed, in addition to the role he plays in fighting the evil warlord Morgorath, soon have him committed to his role as apprentice ranger. The first book in the series has all the hallmarks of typical sword and sorcery fantasy, with a classic good vs. evil conflict. But after Morgorath is defeated at the end of the second installment, THE BURNING BRIDGE, the adventure becomes more complex. Will and his companion Evanlyn are captured by Skandian raiders and become slaves in Skandia. It is only with the help of their captor Erak, who comes to admire the spirit of his young captives, that they are able to escape. The changing loyalties that were a central piece of book three, THE ICEBOUND LAND, continue in THE BATTLE FOR SKANDIA. Will is reunited with his friends Halt and Horace, who left Araluen against their king's wishes to search for him and Evanlyn. They also discover the large army of Temujai --- fierce riders from the Asian steppes who seem to be based on the Mongols --- and must convince the Skandians to work with them to prevent the Temujai from overrunning Skandia and mounting an attack on Araluen. Flanagan's strengths as an author are his action sequences and battle strategies. His battle plans and descriptions of fights are so detailed they could easily be reenacted or plotted on a map. He also writes marvelous relationships between the characters. Horace and Will began as enemies, but their rivalry has evolved into a powerful friendship. Halt's gruff affection for Will is clear, and his clever manipulations of the other characters provide much of the book's plot. Erak, a Skandian raider, has emerged as one of the series' most entertaining characters --- alternately fierce and comedic. Evanlyn, who occupies the unenviable role of princess in disguise, holds her own with the other characters, who have often depended upon her for their survival. A common theme

Published by Thriftbooks.com User , 14 years ago
John Flanagan has written a captivating book. It does have some swearing so if this bothers you, now you know. My 11 year old daugter picked up on the language quickly. Other than that, it is a book with new adventure ideas. The fantasy is not too unbelievable and the historical relevance is a plus.

Published by Thriftbooks.com User , 14 years ago
Ranger's Apprentice-The Battle for Skandia, is a great book for readers who want a suspensful, exciting book. This book is about how Will and Evanlyn were captured by Skandians and escaped the imprisonment with the help of a friendly Skandian. Skandia is then invaded by the murderous Temujai, a very powerful army. With the help of Will and his friends the Skandians rid the land of the Temujai. (Note: Please read the first three books for the complete trilogy.)

Published by Thriftbooks.com User , 14 years ago
This book is a interesting novel and features exciting scenes that you can picture as clearly as if you were there to witness it. John Flanagan in this book produces a whole new adventure for Will and his master Halt. The intensity and breath-taking moments in this book make it a thrilling story. This book will be a great novel for anybody that enjoys fantasy and marvelous performances.

For Adventure Seekers Only

Published by Thriftbooks.com User , 14 years ago
My daughter received book 1 of this series a couple of years ago as a gift. I began reading it to my children at bedtime and soon all 3 of us were hooked. John Flanagan is a very talented author and keeps the suspense going all the way through each book. There were very few chapters in any of the first 3 books or this one where we were comfortable stopping for the night. More often than not, I would hope my kids would beg for one more chapter so I could give in and read on to satisfy my own curiousity. At times, after I tucked them in, I would have to go sneak a peak at the next chapter because I couldn't stand the suspense! Then I would be so excited about what was going on that I would read that chapter to my children during breakfast the next morning! Flanagan has created a world enough like ours to be believeable and comfortable at times, but different enough to pique your curiousity and leave you frequently fearing the unknown. Book 3 was such a cliffhanger that book 4 "The Battle for Skandia" was a welcome relief to hanging at the edge of your seat. Though it is very well written, interesting, full of adventure and excitement, I am able to relax and breath a little more often while reading this one. I give the entire series five stars!
Trustpilot
Copyright © 2022 Thriftbooks.com Terms of Use | Privacy Policy | Do Not Sell or Share My Personal Information | Accessibility Statement
ThriftBooks® and the ThriftBooks® logo are registered trademarks of Thrift Books Global, LLC