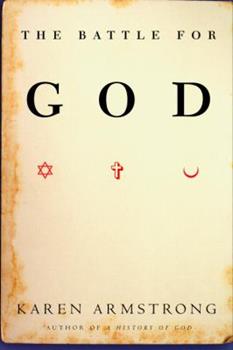 The Battle for God

In the late twentieth century, fundamentalism has emerged as one of the most powerful forces at work in the world, contesting the dominance of modern secular values and threatening peace and harmony around the globe. Yet it remains incomprehensible to a large number of people. In The Battle for God, Karen Armstrong brilliantly and sympathetically shows us how and why fundamentalist groups came into existence and what they yearn to accomplish. We see...

Published by Thriftbooks.com User , 12 years ago
I have purchased several copies of Karen's book, "The Battle For God", because for me, it was a "jaw dropper"; so much in the book I did not know--fact filled,well written, and an easy read despite a ton of information. Without exception, the people I have gifted a copy to thoroughly enjoyed it. The CD allows me to bring the same great book and now the "Author's voice", with me no matter where I go!!! Jim

"We can not be religious in the same way as our ancestors."

Published by Thriftbooks.com User , 21 years ago
IÕve always been interested in comparative religion, but in the aftermath of September 11, it has felt urgent to understand what brings people to beliefs that are so obviously grotesque distortions of any religious tradition. I picked up Karen ArmstrongÕs book because after reading several articles about Islamic fundamentalism, it seemed to me she was the only writer I encountered who had a clue what she was talking about. While others spouted platitudes and engaged in useless debates about whether Islam was a religion of peace or war (virtually all religions are a mixture of the two), Armstrong offered clear and fascinating analyses of how Islamic fundamentalism developed and what its relationship was to the politics of the Middle East.The book, a comparison of Christian, Jewish, and Islamic fundamentalism, has more than lived up to my high expectations. The world isnÕt less dangerous after reading it, but it makes a little more sense, and I feel better equipped to cut through the platitudes and nonsense.Armstrong argues that in the modern world "we can not be religious in the same way as our ancestors," and yet without any religion at all, life feels as if it has no meaning. And so all of us, whether devout, agnostic, or atheist, search for meaning, for "new ways to be religious." Fundamentalism represents one of those searches, but it is a way that grows out of fear.One of the things I found most interesting about this book is that Armstrong emphasizes that this "fear" isnÕt simply some bizarre paranoia. ItÕs often quite legitimate. American Protestant fundamentalism grew up among poor, rural, badly educated people who felt that powerful and sophisticated people were laughing at them and their beliefs. And, to be fair, they were right. And so, in a virtual parody of the people who were looking down on them, they began to argue that their beliefs were "modern" Ñ the Bible was historically and scientifically verifiable. Jewish fundamentalism developed in the aftermath of the Holocaust, which left many Jews with valid reasons to fear annihilation and hope that a picayune observance of "GodÕs law" would save them. Islamic fundamentalism developed in societies asked to modernize too quickly and in ways that had horrendous social consequences. Many Islamic fundamentalist movements, ironically, began as positive attempts to provide social services like health care and education that governments were not providing, but political repression radicalized them and made them more aggressive.All three fundamentalist religions, Armstrong says, have positive aspects. TheyÕve helped people operate in a confusing modern world without losing their sense of the meaning of life. But all three have also shown a dangerous tendency to lose the compassion that is at the core of any authentic religion, and to degenerate into "a theology of rage and hatred."Armstrong concludes that fundamentalists need to become not less religious, but more so Ñ more faithful to the com

A joy to read -- very informative

Published by Thriftbooks.com User , 21 years ago
This is a scholarly, detailed book about the development of religious thought from 1492 to 1999. More specifically it is about fundamentalism, which Karen Armstrong describes as movements of "embattled forms of spirituality" engaging in struggles to "re-sacralize an increasingly skeptical world". One can disagree with her contention that fundamentalist movements are "adamantly opposed to many of the most positive values of modern society", but many fundamentalists do seem to identify our age as one of "cosmic war between the forces of good and evil". I thought her contention that fundamentalists perceive that they are at risk of annihilation and that, consequently, they radiate fear does ring true. ----- Armstrong, a former Roman Catholic nun and author of at least 12 other books about religion, apparently is controversial (see other reviews!) but I found this book to be a well-researched history. It examines only four currents of fundamentalist thought: Jewish, American Protestant, Islamic Sunni (in Egypt), and Shiite Islamic (in Iran). (Do NOT look for any examination of fundamentalist currents in Roman Catholicism, Hinduism, Buddhism, etc - they are NOT represented.) Armstrong's knowledge of Islam is legendary (she is an honorary member of the Association of Muslim Social Sciences and has written extensively about Islam). She also impressed me with her knowledge of Judaism. (Perhaps this is not surprising since she teaches at the Leo Baeck School for the Study of Judaism!). ----- "The Battle for God" can be read as four parallel volumes, and I would recommend readers to go completely through each of the four threads separately, as well as reading the volume straight through. ("The Battle for God" is worth reading and re-reading!) The first time I picked up this book I focused on the historical development of Islam, and found the content to be very helpful. This second time through, I carefully re-read the chapters tracing the Jewish experience. (The author starts "The Battle for God" with Judaism and in an interview stated that this placement was because "the Jewish people were the first of many peoples to experience modernity initially not as liberating and enlightening, but as a lethal assault.") ---- Frankly, as an American living in the Bible Belt (Texas) I found much of the information about Protestant fundamentalism to be "old news." This might not be true of others with less daily contact with American Protestant fundamentalists. Make your own judgement... ---- Especially in my examination of Judaism, I used Armstrong's book along with an online search engine to follow up historical threads (and I was surprised at the enormous amount of detailed online information about Judaism!) This volume opened my eyes to vast new horizons and confirmed my ignorance of enormous areas of human religious thought. I found "The Battle for God" to be highly useful in initiating new explorations...I hope other readers do too!

A Fascinating Look At Fundamentalism

Published by Thriftbooks.com User , 22 years ago
I picked up this book hoping to gain some insight into "why" fundamentalists view the world as they do. Armstrong did her research which I expected (having read "A History of God", I sensed she would accomplish that) and she delivered interesting observations and a wealth of history. What was a pleasant surprise was that rather than trying to 'fight' fundamentalism, she made a real effort to try to 'understand' it (unlike Bruce Bawer in "Stealing Jesus" whose knowledge of fundamentalism history was unfortunately outdone by his bitterness and intent to strike back).The contrasting of the fundamentalist perspective with the non-fundamentalist perspective was an eye opener. She points out the need for both meaning in life and reason. The trouble with applying a literal understanding of the Scriptures was discussed as well as the problem of relying upon 'reason' alone.Even though Armstrong's observations were not as exhaustive as the history she describes, she gives you enough history to enable you to decipher and try out some theories of your own. Overall, I was much more impressed with this work than "A History of God".

Published by Thriftbooks.com User , 22 years ago
I have been following the works of Karen Armstrong for several years. I believe her to be on a fearless quest for Truth. She is not afraid to follow the path where ever it may lead. I can't wait to see where she takes us next.In "The Battle for God," Armstrong clearly shows Fundamentalists and Modernists can absolutely not understand each other. And, how both sides need to take a clear, objective look at the other's position. This book is an honorable and respectful treatment of sensitive subject matter.
Trustpilot
Copyright © 2022 Thriftbooks.com Terms of Use | Privacy Policy | Do Not Sell or Share My Personal Information | Accessibility Statement
ThriftBooks® and the ThriftBooks® logo are registered trademarks of Thrift Books Global, LLC