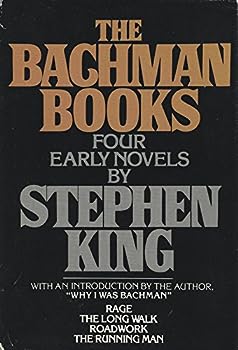 This description may be from another edition of this product. The name on the covers was Bachman. But the imagination could only belong to one man. A compelling collection of four spellbinding stories of future shock and suspense - "Rage", "The Long Walk",...

Great book! The long walk is the best in the collection. Followed by roadwork, Rage and then The run

The Darkside of Stephen King.

Published by Thriftbooks.com User , 16 years ago
The Bachman Books were a way for Stephen King to write a different style under a psuedonym. Under the Richard Bachman pen name, King has managed to paint a bleak but realistic world (unlike the supernatural landscape of 'Salem's Lot and The Stand)). Rage: This book is about a young teenager named Charlie Decker. He's like any ordinary kid but he has a problem. His childhood has turned him into an angry sociopath who's unable to cope with life and does the most drastic thing he could think of, he holds his Algebra class hostage. Let the mind games begin! Long Walk: In a futuristic America, a totalitarian government has taken over. To placate the population, a dictator known as The Major presides over a deadly game of endurance call The Long Walk. 100 teenage boys are selected to participate. The winner gets set up for life, the rest are left for dead. Roadwork: A hard working joe who's life is turned upside down when his home is selected for demolition. A sour relationship, a voice in his head and a new rifle make a terrible combination. When the fuzz come around that's when the fun begins. Running Man: Another bleak tale about a media and consumer driven society (sounds familiar). The growning have-nots are greatly out numbering the haves. One of the many have nots (Benjiman Richards) decides to help out his sick child and part-time prostitute wife by becoming a Free-Vee games contestant. Along the way, he learns and is tranformed into something he never thought he was capable of becoming. An awesome collection of short novels. I higly recommended this novel. You'll never regret it.
Copyright © 2020 Thriftbooks.com Terms of Use | Privacy Policy | Do Not Sell My Personal Information | Accessibility Statement
ThriftBooks® and the ThriftBooks® logo are registered trademarks of Thrift Books Global, LLC