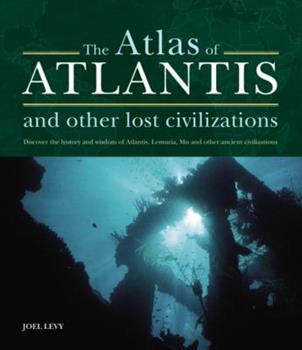 Was there once a civilization more advanced than ours, more technologically sophisticated, and more spiritually aware than our own? For anyone intrigued by these questions, this is the first definitive overview of the theories about the location of lost civilizations like Atlantis, Lemuria, and Mu. Each society is brought vividly back to life by exploring the history of their inhabitants and the mythology that has since grown-up around them. This...

Published by Thriftbooks.com User , 12 years ago
This intriguing compendium breathes life into the history, theories and myths of lost civilizations like Atlantis, Lemuria, and Mu. The volume is divided by section to cover all parts of the globe and features lavish reconstructions, maps of possible locations, detailed annotations, with an overview of all the archeological evidence. Beautifully illustrated throughout in full-color, this would make a welcome gift for any enthusiast of history or ancient mysteries.

Atlantis- Either fact or fiction?

Published by Thriftbooks.com User , 13 years ago
The book discusses popular theories on the existence of other continents and vivilizations. Plato described Atlantis in the Dialogue of Critias. Atlantis consisted of the following features: o Temple of Poseidon with a ceiling of inlaid ivory o magnificent palaces surrounding the temple of Poseidon with hot and cold baths o the laws of Atlantis laid down by Poseidon and governed by 10 kings o Bull cults roaming the temple o the 5-6 year interval for sacred bull hunts The Aqueducts carried water to the outer concentric circles of the city. The mineral oriohalum was contained on the Poseidon pillar. Edgar Cayce believed that the continent of Atlantis existed somewhere between the Mediterranean and Central America. Lemuria was the lost continent in the Indian Ocean. Africa, Madagascar, India and Malaysia were linked by a giant supercontinent. Native Lemurians were said to have 4 arms and eyes in the backs of their heads. Atlanteans and Lemurians had no logical thought but they did have an extensive power of memory and telepathy. The Land of Mu was said to exist near Easter Island. The terra firma consisted of a chunk of land masse measuring 3000x 5000 miles with 64 million inhabitants. This volume is a fantastic rendition of continents believed to have existed many centuries ago. Some futurists believe that these lands may rise againin the not too distant future.

Published by Thriftbooks.com User , 13 years ago
If you study the probabbilty of ancient lost high civilizations, this is a must have book for you. While there it contains no data that you probably havent already read, the book is in a very readable format. The book is very well suited to introducing the subject matter to those who have had no education on the issues. This is a very neat little book, and a good value.
Copyright © 2020 Thriftbooks.com Terms of Use | Privacy Policy | Do Not Sell My Personal Information | Accessibility Statement
ThriftBooks® and the ThriftBooks® logo are registered trademarks of Thrift Books Global, LLC