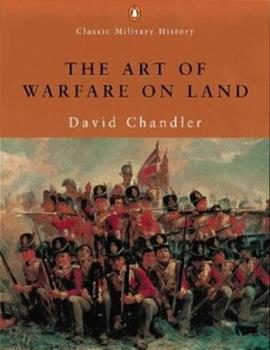 The Art of Warfare on Land (Classic Military History)

In 216BC Hannibal brought about the destruction of the Roman army at Cannae using the classical manoeuvre of the double envelopment: in 1941, the German commander von Runstedt brought off a similar manouevre against the Russians at Kiev and won an equally crushing defeat. In this book, the author sets out to demonstrate the constant factors that have underlain the strategy and tactics of the great commanders, from Alexander the Great to Marshal Zukhov...

Published by Thriftbooks.com User , 21 years ago
This is a great book for lovers of military history. As the title states, the focus is primarily on land warfare. The initial chapters document the beginnings of warfare from not only Western history, but also a fair amount of Eastern as well. Excellent analysis is done by David Chandler, who is peerless in the field. All types of strategy and tactics, from Sumerian phalanx, Mongol Horde recon in force, Gustavus Adolphus' mixed brigades, to French paradrops at Dien Bien Phu, are covered by Chandler. A multitude of photos, artwork (color & b/w), and numerous easily understood battle diagrams are included. Any amateur or professional in the field of warfare would be remiss to not include this book as part of his/her collection.
Copyright © 2020 Thriftbooks.com Terms of Use | Privacy Policy | Do Not Sell My Personal Information | Accessibility Statement
ThriftBooks® and the ThriftBooks® logo are registered trademarks of Thrift Books Global, LLC