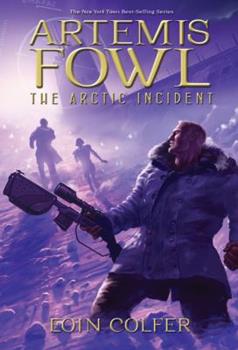 (Book #2 in the Artemis Fowl Series)

A New York Times Bestseller. The world's youngest, brightest, and most dangerous criminal mastermind is back. Artemis is at boarding school in Ireland when he suddenly receives an urgent video e-mail from Russia, with a plea from a man who has been kidnapped by the Russian Mafia. An Accelerated Reader title for ages 12 and up.

Published by Carmen A. Sewer , 1 month ago
I have just sent your office an order of three books. this order is not to go to my daughter Mary Sewer. PLEASE REMOVE Mary's NAME AND ADDRESS 21120 Madison Avenue New York, NY FROM MY ORDER FORM. THE ORDER IS TO BE SENT TO : Carmen A. Sewer 387F Bristol Street Brooklyn, New York 11212

Published by Thriftbooks.com User , 18 years ago
"Holly tucked a neutrino 2000 into it's holster, issuing commands through her helmets com-set:'code 14, reapeat code 14. Fairy down. Fairy down. We are under fire. E37. Send warlock medics and backup.' " This is some LEPrecon squad fairy lingo from Artemis Fowl: The Arctic Incident. This is a book that makes you laugh out loud and read in amazement about a thirteen-year-old criminal mastermind, some very futuristic (and tempermental) fairies, very stupid goblins, criminal dealings in the arctic, the theft of Oscar award trophies in Los Angeles, deliciously evil pixies, and more. I liked this Artemis Fowl book better than the first one, because it had more surprises, and a more seasoned Artemis. The thing you don't really think about when you read this book is that Artemis is a criminal; you're not supposed to be rooting for him. But you find yourself watching the battle from both sides, enjoying every minute. The rendition of fairies/pixies/dwarfs/goblins/centaurs in this book is so original, and much cooler than any other way I've read about them. Eoin Colfer's pixies and fairies have been forced underground by the existence of 'mud men' (humans), nevertheless technologically developing their society that makes for some interesting sci-fi parts in the book. I would recommend this book to people aged eight to fourteen, and to fans of Garth Nix, Philip Pullman, J.K. Rowling and Gillian Rubinstein.

Artemis is in the Arctic!

Published by Thriftbooks.com User , 18 years ago
If you want to be thrilled and have an adrenalin rush, but unfortunately you've been grounded for "something you didn't do" and can't use the TV to watch a Bond movie, maybe you should pick up a book. I suggest you pick up Artemis Fowl, then for an extra adrenalin rush read Artemis Fowl: The Arctic Incident Child criminal mastermind Artemis Fowl is back with a whole new adventure! His fortune is slightly bigger because in the past year he outsmarted the LEPrecon - the Lower Elements Police recon, an elite team of fairies, pixies, sprites and other magical lower element folk. They are responsible for keeping Heaven City, the last place that man hasn't taken over, safe. Even with their futuristic high-tech equipment Artemis still outsmarted them and got his hands on some fairy gold. Anyways, this story starts off when Artemis gets sent to a boarding school, where he gets an urgent video e-mail from the Russian mafia. The screen shows a man Artemis never thought he'd ever see again... his father, Artemis Fowl senior. Artemis figured that the Russian mafia kidnapped his father. Artemis is determined to rescue his father, but it is not going to be an easy task. Meanwhile, the LEP were having troubles of their own. Someone was providing goblins with softnose lasers, which could be dangerous. So Artemis makes a deal with the LEP that if he helps them with their crisis against the goblins, they would help him rescue his father. Can Artemis help the LEP and rescue his father? You'll just have to find out yourself. I thought this book was awesome!!! It had all the ingredients of a great book: there was comedy, loads of action, it was interesting, a good plot, fairies and other folk, romance (just kidding) and plenty of high-tech gadgets. Reading this book was like if you put a Bond movie, a fairy tale and a sock puppet in a blender and turned it on and drank it. It would take a million-bazillion years to explain how amazing it was. I hope Eoin Colfer decides to write a third book for this series. I would give this book five and a half awesomes (which is just like five and a half stars).

Artemis Fowl is back and better than ever!

Published by Thriftbooks.com User , 19 years ago
When I heard that the sequel of Artemis Fowl was coming out I was very excited and got the book the first day it was published, though I have been too lazy to write a review until now. I must say, I LOVED this book much more than the first one and will definitely give Harry Potter a run for its money. This whole new adventure of Artemis Fowl's starts with him at an Ireland boarding school when suddenly out of the blue he receives an urgent video email from a person he thought he would never ever see again in his life---his father, Artemis Fowl Sr. It turns out after his ship the "Fowl Star" sank in the arctic ocean, Artemis Fowl Sr. was kidnapped by the Russian Mafiya. (Intersting huh?) As Artemis rushes to save his father, he is once again stopped in his tracks by a familiar foe, LEPrecon fairy police, Holly Short. This time though Artemis isn't going to work against them, but must enlist in their help to track down and save his father. Of course, things aren't going to be easy, as a betrayer in the LEPrecon fairy police, must once again call Atemis' brilliant mind to work. Artemis Fowl is definitely back and better than ever. I really liked to see the lighter side of Artemis Fowl and this book was another adventure full of magic, laugh-out-loud humor, and more importantly, heart.

If you were impressed with the first book...

Published by Thriftbooks.com User , 19 years ago
... then you'll love the second.In this book Artemis Fowl, a thirteen year old criminal mastermind is on year older and one year wiser. He is living in an Irish boarding school when he receives a message about the man he thought he'd never see again, his father Artemis Fowl Senior. Meanwhile Captain Holly Short and Commander Root of the LEPrecon forces face a huge problem when they discover that goblins, one of the stupidest forms or fairy, have been receiving human help and are turning into a threat in the fairy world. Artemis, Butler, and the fairies are once again thrown together, but this time under different circumstances. They make a deal, if Artemis helps them with their problem, they'll help him find his father. Easy right? Well, if you think that you could be no further from the truth. The goblin's scheme is more complicated than anyone would have guessed. Artemis and co. soon find themselves fighting for their lives.While I loved the first book, Artemis Fowl, I was blown away by the second. Eoin Colfer proves what a talented author he really is with the wonderfully three-dimensional and original characters you find in this book. Like the first book it was suspenseful, action packed, and very comedic. Unlike the first book you get to see Artemis use his powers for good and play the hero for once, something that Artemis isn't too keen on. If you're a fan of the first book in the series I highly recommend reading the second. The Arctic Incident is a prime example of why kids fantasy is such a great genre.

Back and Better Than Ever

Published by Thriftbooks.com User , 19 years ago
Full of wit, magical technology, and a lot more action, this sequel to Artemis Fowl is just what you've come to expect of Eoin Colfer. Old characters return: Mulch Diggums(now living-and stealing-in LA), Trouble Kelp and his brother Grub, Foaly, and (briefly)Chix Verbil. A few new villans and some fairie politics keep the plot fast and furious, while Artemis (fresh from boarding school) and Butler team up with Holly and Comander Root to stop a smuggling ring. Oh, and rescue Artemis's father, MIA two years ago in a darkly humerous explosion aboard a cola-carring ship. The book itself is a work of art,and although this one lacks the gnomish code along the bottom, the cover is exceptionally well done.
Copyright © 2020 Thriftbooks.com Terms of Use | Privacy Policy | Do Not Sell My Personal Information | Accessibility Statement
ThriftBooks® and the ThriftBooks® logo are registered trademarks of Thrift Books Global, LLC