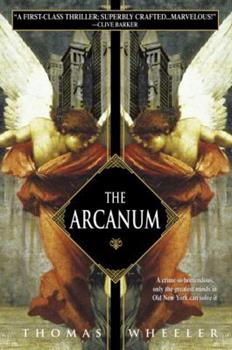 It is 1919 and the Great War has come to a close. But in the shadows of the world's major cities, the killing has just begun. In this perilous time, as the division between order and chaos grows increasingly slim, a select group of visionaries have taken it upon themselves to ensure the safety of humanity. They are known as the Arcanum. In London's stormy Hyde Park, Konstantin Duvall, the Arcanum's founder, has been killed in a suspicious accident...

This Novel is Not Historical Fiction...

Published by Thriftbooks.com User , 16 years ago
I need to repeat that because it's important: This novel is not historical fiction. The characters could have been anywhere, anywhen, and the story would have been exactly the same. The setting was a matter of convenience so the author could get the players in place and move straight into the plot - which Wheeler did. This novel, despite having some amazing characters in it, isn't a character driven book. It's a story driven book, and - like the setting - I got the distinct impression that the author chose familiar personalities who not only could contribute to the plot, but who didn't require so much explanation that the book would have needed to be another 50+ pages. The story is fantastic and well-paced, and one hell of a fine read. It's not what you might expect, so leave your expectations at home and hang on for a wild ride.

Published by Thriftbooks.com User , 16 years ago
Thomas Wheeler's book is about a secret society known as the Arcanum trying to solve the case of a murder and the mystery of a group of angels on earth. The society members in the story are Arthur Conan Doyle, Harry Houdini, H.P. Lovecraft and Marie Laveau. I thought the book was an easy read and very good story. Some of the other reviewers gave it a thumbs down because the concept was not very original but although it may not be, Mr. Wheeler did a great job with it and I found the book to be very enjoyable. I would definitely recommend it to anyone interested in sci-fi/mystery stories.

Published by Thriftbooks.com User , 18 years ago
Well to my surprise the first customer reviewer for the arcanum obviously isn't an avid reader, and he doesn't know what he is talking about. On to the book now. This book was phenominal, played out like a movie in your head. It gave me a glimpse of old New York, and into the lives of some famous people like Houdini and Sir Arthur Conan Doyle and did a good job at that. I'm sure a screen play will follow from this great new author.

Published by Thriftbooks.com User , 18 years ago
I saw this book in the bookstore and was intrigued by the description of the story and the promise of something both historical and supernatural. I was a little nervous because Wheeler is a first-time novelist, but I took a flyer and bought it.Boy, was THAT the best decision I made this week!THE ARCANUM is a rip-roaring good read! I can see how Wheeler has been making a living in Hollywood. This read like a big summer movie -- fast-paced, smart, with memorable characters and a great ending. It fairly drips with inventive, tactile description -- you literally feel transported back to the post-WWI era. I put it easily on par with THE ALIENIST, but in the end I found ARCANUM to be more entertaining and less twisted. The best part of the book are the characters... people you know from history interacting in ways you would never expect. The creepy, supernatural components are made oddly more real by the well-researched historical detail. Unfortunately, with THE LEAGUE OF EXTRAORDINARY GENTLEMEN stinking up theaters last year, I doubt Hollywood has the courage to make this into what would undoubtably be a better movie.Bottom line -- this is a great book!

History, mystery, and dark fantasy combine in a fine tale

Published by Thriftbooks.com User , 18 years ago
In 1919 London, a car full of young people runs over an old man and with his dying breath he says "He's in my mind" and then says Arcanum. The Ministry of Munitions Winston Churchill notifies Sir Arthur Conan Doyle that Konstantin Duvall is dead. Duvall was a mage and a mystic, an explorer and collector of all things occult. He kept many secrets one of which, The Book of Enoch, the third part of the Bible that was thought to be erased from existence in the first century, was stolen from its hiding place by a practitioner of the dark arts.Doyle goes to America where he brings together the rest of the members of THE ARCANUM, Harry Houdini, H.P. Lovecraft and the powerful voodoo priestess Marie Laveau. They must find the missing book and the killer. The perpetrator is a powerful mage who practices the black arts and is able to elude THE ARCANUM. They meet on his terms as he is able to spring a trap that has Houdini in jail and the rest of the group running from the law while guarding an Angel who doesn't know how to get home.History, mystery, and dark fantasy combine to make THE ARCANUM a noteworthy book, a pop icon and a source for a good movie similar to the League of Distinguished Gentlemen. Historical figures are brought together in a time when the forces of darkness threaten the world, setting up the classic good versus evil confrontation. Thomas Wheeler's debut novel totally enthralls the readers with another perspective on the evil forces that threaten this world making the horror feel new and exciting.Harriet Klausner
Trustpilot
Copyright © 2022 Thriftbooks.com Terms of Use | Privacy Policy | Do Not Sell or Share My Personal Information | Accessibility Statement
ThriftBooks® and the ThriftBooks® logo are registered trademarks of Thrift Books Global, LLC