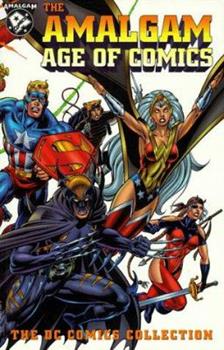 The Amalgam Age of Comics (The DC Comics Collection)

(Part of the The Amalgam Age of Comics Series)

Published by Thriftbooks.com User , 12 years ago
if you love marvel, and if you love dc, this is something that you got to add to your collection, in this cross over that occurred during the marvel vs dc event, both universes unite to create only one amalgamated universe, with characters who are "amalgams" of two or more characters from both universes, in order for you to really enjoy this collection of hypothetical titles you should be a fan of both universes, and fill in the blanks that come before and after the titles (none of the issues are "origins") As a marvel fan, I can assure you that even if you are not a hardcore fan of DC(or if your are a fan of DC, and not marvel), you are going to like the stories about the dark claw(batman + wolverine) ,super soldier ( cap. America +superman), and my favorite jlx (the x-men + the justice league) The other stories are also good, but I didn't know a lot of info about the backgrounds of the characters that were amalgamated, so it was hard to find the similarities, and finding the similarities was one of the things that attracted me to this book. SPOILER ALERT this is not part of the review,and is not really an spoiler since you can see it in the cover, but they turned daredevil and deathstroke the terminator into a woman.

The amalgam age of comics

Published by Thriftbooks.com User , 14 years ago
This was a five star comic book n if u like the DC vs Marvel comic then this is a comic book to buy

Published by Thriftbooks.com User , 21 years ago
The most interesting thing about these stories to me was that unlike the "Marvel verses DC" story where characters were matched up to fight based on the similarity of their strenghts and powers (ie Hulk vs Superman, Sub-mariner vs Aquaman, Batman vs Captain America), characters in this book were matched up based on their personalites. For instances, Wolverine and Batman were combined into a charater called Dark Claw. Despite their differences both Wolverine and Batman are dark characters, loners. Superman and Captain America were combined into Super Soliders. Both of these characters are role models and heros in every sense of the word. The orgin of the Amalgam character is a mixture of the two characters he os she is based on and usually were combined in interesting and unique ways. There were exceptions to this story formula, such as "Bruce Wayne: Agent of SHEILD". This story tells how Bruce Wayne's parents were spys killed by Hydra and Bruce has entered Sheild and used his power and money to turn it into his own private army. The issue opens with Bruce launching an attack on Hydra island in a personal war he has started. We can see a corruption here that has never really been used in the Batman stories, this gives a chance to redo certin characters in a new way, areas that fans won't allow writers to take with tried and true characters. My only complaint would be how many different stoies were combined. There are a few stories in the book everyone will enjoy, a true Marvel and DC fan will enjoy most of them, but only the most diehard fan be familar with all the characters. But this slight flaw is compentsated for by the fact that the stories themselves are interesting without knowing the characters behind them. All and all a great read.

A Journey to Another Universe

Published by Thriftbooks.com User , 21 years ago
If you are a fan of Marvel and DC superhero material; this one is for you. Especially the Wolverine Batman combination in this volume! This is where the comic companies should be expending their efforts. It's experimental mini-series titles like this that make the genre interesting again. Another I loved was Dave Gibbons Captain America/Superman hero the Super-Soldier. There should be a sequel to this series! It's too good to pass up!

Published by Thriftbooks.com User , 23 years ago
Around the 1970's and into the early 80's, Both Marvel and DC had published a series of cross-company publications (Superman vs. Spider-Man, Batman vs. The Hulk). Those were kindergarten books compared to the Amalgam Universe. Dark Claw (Wolverine/Batman), Super-Soldier(Capt. America/Superman), and the JLX (JLA/X-Men) are nothing less than inspired. Check out Jim Balent's artwork on the Dark Claw story. It is some of his best.
Copyright © 2022 Thriftbooks.com Terms of Use | Privacy Policy | Do Not Sell My Personal Information | Accessibility Statement
ThriftBooks® and the ThriftBooks® logo are registered trademarks of Thrift Books Global, LLC