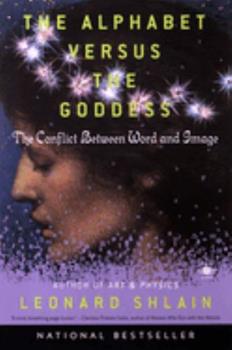 The Alphabet Versus the Goddess: The Conflict Between Word and Image

Published by Rose Bryce , 2 years ago
Truer than the male world will ever admit. Goddess rules forever!!! Close your eyes and dream. You have more power than the male world can ever deny. Rise up Sisters! Forever! If it takes an enlightened male voice for the truth to be heard - then SO BE IT!!!

Are we truly entering into a new "Golden Age" as the author espouses?

Published by Thriftbooks.com User , 17 years ago
This book posits the theory that a rise in alphabet literacy was accompanied by an equal decline in the reverence that ancient societies had for the Goddess and, in more contemporary societies, for the values associated with the feminine. The book is provocative in its offering and yet seems to confirm a theory that I have always espoused, that the rise of scientific rationalism, associated with left-brain thinking, at the expense of the more intuitive, creative and imaginary side, will ultimately spell the doom of all of us. It is interesting that this book was published before the dramatic turn of events that began with 9/11, the war in Iraq, and the ensuing entrenchment of a right-wing religious fanaticism evident in both the Christian West and the Muslim East. This "bunker mentality" has now led the way for a decline into savagery, of which factions within the Western and Arab Worlds must both be held accountable. The "Clash of Civilizations" made famous by Samuel Huntington must be a phrase surely reserved for the patriarchal, left-brain adherents who, while bowing to the same male god, are foisting upon the world a type of barbarism evident during the crusades and other epochs, where a dangerous and incipient nationalism, or a sense of religious exclusivity, ultimately meant that the "other", women, children, nature, those not of your ken, would be repressed, violated and destroyed. You would not find this in a matriarchal, agrarian society. I wonder if Dr. Shlain could now write, as he did in his epilogue, that we are entering into a "new Golden Age"?

Published by Thriftbooks.com User , 22 years ago
Intelligent, insightful, provocative and challenging, this is a book I could hardly put down! For many, Leonard Shlain's thesis will be difficult to swallow, cutting across cultural and religious prejudices and taboos with the precision of a surgeon's scalpel. (The author's specialty is brain surgery). For others, this books will evoke many 'Ahas's' and 'Amens'. Unlike many contempory authors, Mr. Shlain offers us a genuine vision of ourselves. To borrow a Zen metaphor, reading this book is like holding up a polished mirror which allows us to see ourselves more clearly and wholly. In particular, the issue of hemispherical dominance in relationship to perception, communication, art, religion, politics, gender roles and values, psychology and philosophy is illuminated by this perspective. And the central question of 'What became of the Goddess?'is given a strong and intelligent reply.Where I would like to see more emphasis in the book is on the perception of sound as well as visual stimulus. For example, music is not examined as the potentially integrating artform that can overcome the schizophrenic tendencies of left-brained written language and right-brained visual imagery. And the left brained time dominance over image and sound is not considered in relationship to motion pictures (film) or digital technology/voice transmission and music.Despite these differences in perception and opinion, this is an important book addressing critical issues in our evolution and survival as a species. I hope to read more books by this author of wit, style and substance!

Published by Thriftbooks.com User , 22 years ago
Every so often I read a book that makes me groan, wishing that I'd seen the connection first, that I were a writer, that I'd written THIS book. In a class with Sjoo and Moore, Eisler, and Merlin Stone, The Alphabet vs. the Goddess connects the dots and follows them into our collective future. The question of the past few decades "HOW did humankind transition from matrifocal culture to patriarchal, and why?" is answered brilliantly in this book (and finally, a much more plausible answer than just 'IndoEuropean Invaders'). I LOVED this book, it will go high on my list of titles to recommend. Even if you are immersed in academia, studying linguistics and philosophy (as I once was) don't worry about the negative review posted below -- take it as an indication of how revolutionary this work is. Its a book I am tempted to immediately read again, the second time with a highlighter in hand.

Published by Thriftbooks.com User , 23 years ago
First of all, I absolutely loved this book. It is a fascinating and beautifully written book, encompassing history, science, and religion studies. I'd like to clear up some confusion and misconceptions about the book, however. (At least, how I see it) The Alphabet versus the Goddess is NOT an argument against literacy or writing. (It's ridiculous to even entertain such an idea, considering the medium we are talking about!) Nor is it an arrogant, sweeping statement of how things are absolutely. It is simply an observation of how male/female values have changed throughout history as the advent of the alphabet is experienced by cultures around the world. The author is always careful to acknowledge that there are other theories, and that this is only his opinion, based on the facts that are presented.The main premise is not that literacy itself is the "root of all evil" or the sole cause of the oppression of women and feminine based religions. Rather, these things occur when alphabet literacy (primarily a left-brain, masculine function) is exalted and revered to the exclusion of all else. It is when linear, concrete thinking overrides image, the abstract, and intuition that conflict arises. The key is, to put it simply, balance. The feminine and masculine sides are neither "good" nor "bad", just different facets of the mind that need each other to be complete.I love to read, probably more than most people. It is rare to find me in a spare moment with my nose not buried in a book. And there is no denying the tremendous value and importance the written word has in our lives. Yet I see and understand the necessity of this balance. Too often people will believe the most ridiculous statements, simply because they are in written form. (The supermarket tabloids and internet rumors are two obvious examples of this.) Reading and writing are also primarily solitary pursuits, which tend to shift our focus away from the world and people around us, to the point of indifference or, in extreme cases, outright hate. Balance, balance, balance.I cannot help but make a couple observations on the review from San Francisco - One, the comment about the author being a doctor, which makes his words gospel and infallible. Only once in the entire book (in the preface) does the author identify himself as a doctor. He does this only to explain his knowledge of the neuroanatomical portion of his hypothesis. His title is not on the cover or the copyright page or anywhere else in the book. I don't see a basis for the insinuation that the author is "throwing his weight around" as a doctor, so his opinion should of course be correct. Also, did anyone else find the line about how the "precious resource" of paper and ink were "wasted" amusing? After reading this incredible book (which you don't have to agree with to enjoy, anyway; it's fascinating stuff!) the reviewer throws in a comment which perfectly epitomizes the pro

I got in an argument with my Dad over this book!

Published by Thriftbooks.com User , 23 years ago
I was drawn to title, I'd never heard of the author, and after just a few pages I found myself in several heated conversations with people about how writing changed the fate of women. My Dad stormed out of the room saying men and women could never have been equal at any time in history. I'm just riveted by Dr. Shlain's ability to weave the suppositions from archeologists, Biblical scholars, historians and neurologists into such an exciting, palatable, provocative and informative read. I've been aware of these characters or icons from history all my life, but I've never had any sense of relationship among these stories from different lands.This is the first text I've run across that stops to ask why do we know who these people are? How did they learn to write? Who were they before they wrote? What stories DIDN'T get written down? What did they have to sacrifice to learn to write?It wasn't until I read his chapters on the "adjustments" the Greek myths suffered that I realized as a girl studying those stories in school, they really did leave me feeling less valuable as a woman and guilty for disliking those female deities. Lo and behold, that's what they were designed to do! Still effective after 5,000 years.This is a remarkable text that should not be disregarded as feminist or fantasy. He's well-researched, offers several respected hypotheses to explain undocumented historical impacts and his presentation is enormously enjoyable.
Trustpilot
Copyright © 2022 Thriftbooks.com Terms of Use | Privacy Policy | Do Not Sell or Share My Personal Information | Accessibility Statement
ThriftBooks® and the ThriftBooks® logo are registered trademarks of Thrift Books Global, LLC