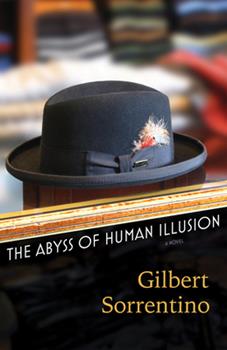 The Abyss of Human Illusion

"To the novel--everyone's novel--Sorrentino brings honor, tradition, and relentless passion."--Don DeLillo "Sorrentino [is] a writer like no other. He's learned, companionable, ribald, brave, mathematical, at once virtuosic and somehow without ego. Sorrentino's books break free of the routine that inevitably accompanies traditional narrative and through a passionate renunciation shine with an unforgiving, yet cleansing, light."--Jeffrey Eugenides...

Published by Thriftbooks.com User , 11 years ago
The Abyss of Human Illusion is aptly titled, given that Sorrentino develops so many of his narrative pieces with the focus on the illusions in everyday life: the assumptions we make, or the events we mentally rehearse for but never act out. This collection is fifty-some short vignettes, not quite a collection of short stories, but still packing just as much of a punch. Most are just two or three pages, and what he can accomplish in so few words is amazing. This was my first Sorrentino collection, and it's honest and pure without being depressing. Even the parts about depression were somehow unsinkable. A great deal of humor is within it, a sweet humor as well as snarky realism. For example, in one section, an elderly man pities his upstairs neighbor, another elderly man with a crippled foot. They have no connection, but the downstairs neighbor imagines an entire life for the poor man above, embellishing it with sad little details about war injuries and ungrateful children that allow him to ignore the terrible noise the upstairs man makes. Finally, unable to stand the noise much longer, he goes upstairs and finds a scantily clad woman at the door, who looks at him disdainfully, as he is an old man. Thus the noise is explained and the downstairs neighbor is chastened. Isn't that how it goes? Another man is set to review his friend's published poetry collection, one of several in a successful artistic career. He can't make himself get to it, and keeps putting it off. Finally, he has to admit it to himself what prevents him: the realization that his friend is "an arrogant, selfish, cruel, egocentric yet charming man of sociopathic bent, to put the very best face on it, changed, oh yes, transformed his public presence into one of a subtly nuanced and delicate humility, transformed his entire life and world into the very picture of the sensitive artist." And the larger revelation? His friend was a terrible poet in the first place. Immediately you imagine that the reviewer would justify the poet's corruption if only he had more talent! Sorrentino makes some pokes at my beloved New Yorker magazine (I feel kind of guilty for enjoying it so much!). He makes more than a few allusions to famous people who lacked the talent to back up their legend, but I couldn't place exactly who he meant (I'm sure they know!). He's uncanny at noting the little details that make each person tick. In fact, given the seemingly trivial details he explores, you'd assume the stories would be longer. But it's the specificity of what he describes that allows you to immediately know what he means without pages of descriptions. An amazing gift, because none of the pieces feel short-changed or hurried; all are exactly right. The introduction of this novel is also quite touching as it is written by Sorrentino's son, explaining how his father completed the work despite his debilitating illness, just weeks before his death. I'm eager to see if Sorrentino's other novels are this s

Published by Thriftbooks.com User , 11 years ago
Having spent more than a few years in the world of book criticism and surrounded by literary friends, it's been my observation that anyone who's more than a casual reader not only has their favorite author but their favorite lesser-known author. Spend enough time amongst the Hemingways and Kerouacs and Vonneguts who stand astride the realm of what is considered popular literary culture, and you eventually uncover the writers who fall through the cracks, influencing the titans or doing what they do better minus the accolades. They might only have one title to their name, or they might be known only for works published postmortem, but the bond they form with their fans is a devotion frequently stronger than any author with more awards or higher sales figures. For me, that niche author is Gilbert Sorrentino. I was swayed into reading him back in 2006 by catching the New Yorker's review of his "A Strange Commonplace," a novel they defined as "fifty-two discrete parts--a dazzlingly original deck of cards" (the first review I ever read where one line served as the hook for purchase). The praise proved more than deserved, and since then I've been an unrestrained admirer of his books despite the occasionally trying effort of actually finishing one. With a career spanning four decades, Sorrentino was a titan of experimental fiction, effortlessly picking at the genre's conventions with humor and a mastery for dialogue both internal and external. Given Sorrentino's death of lung cancer in May of 2006, I assumed that we'd regard "Commonplace" - published that same month - as the coda to his career, but it turns out he wasn't quite finished. Early that year he presented his son Christopher with a heavily corrected sheath of typings and a composition notebook, a bundle he referred to as "my last book" and that has now come to life as "The Abyss of Human Illusion." And while it usurps the place of honor "Commonplace" held, it is every bit as worthy to wear the mantle, a book at turns funny and lonely and one that speaks to the remarkable skill at Sorrentino's disposal. "Abyss" follows the same template of Sorrentino's later works "Commonplace" and "Little Casino," in that it falls into the shadow between novel and short story collection. The book is made up of fifty vignettes, taken from low points and turning points in the lives of their unnamed characters: a man thinks in disgust of his friend's new poetry book, a New Year's Eve party turns into an adulterous brawl, a man seduces his neighbor's wife and takes her to his pious Oklahoma family to sleep in the bathtub. There's no stated connection between any of them, though several of the stories do seem to have unsettling overlaps ranging from marital circumstances to salad dressing. "There are more serious insanities to ponder, surely, but we are, for the moment, caught in the toils of this one," is how Sorrentino opens one of these vignettes, and this serves as a fitting descriptor for the book's t

A selection that would do well in any literary fiction collection

Published by Thriftbooks.com User , 11 years ago
Life is merely a sum of its parts, and the work of Gilbert Sorrentino is the same. "The Abyss of Human Illusion" is a collection of short narratives as Sorrentino puts together a unique and highly entertaining story filled with humor that doesn't hold itself back and leaves readers laughing as well as thinking. "The Abyss of Human Illusion" is a selection that would do well in any literary fiction collection.
Copyright © 2020 Thriftbooks.com Terms of Use | Privacy Policy | Do Not Sell My Personal Information | Accessibility Statement
ThriftBooks® and the ThriftBooks® logo are registered trademarks of Thrift Books Global, LLC