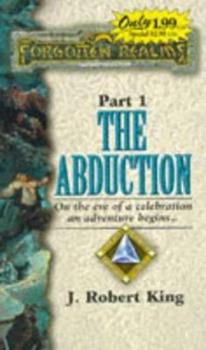 The Abduction (The Double Diamond Triangle Saga , No 1)

The first of a new serial novel series set in the Forgotten Realms world! Someone has kidnapped the fiancee of the Open Lord of Waterdeep on the eve of their wedding. Now the lord, Piergeiron the... This description may be from another edition of this product.

Published by Thriftbooks.com User , 13 years ago
The Abduction The abduction is the first book in a nine part serial novel. The others are The Paladins, The Mercenaries, Errand of Mercy, Opportunity for Profit, Conspiracy, Uneasy Alliances, Easy Betrayals, and The Diamond. All nine complete the full story. The abduction begins with the Open Lord of Waterdeep about to get married. There is a pre-gala where all the merchants and other guilds mingle and conspiracies begin the main plot being the abduction of the bride Eidola. The main characters are Noph, the open lord Piergeiron Palidinson, Eidola, and the Lord Mage of Waterdeep Kelben Arunson. Other subplots are Noph's predicaments, the complication of the trade agreement the nobles want approved, and others I will say to avoid spoilers. The book is very short at 87 pages and reads rather quickly. The prose moves nicely and there didn't seem to be much lag even for an introductory book. There is not too much time spent on character introductions since some of them realms fans will already have an idea about them. This book is basically a set up to get the main plot point started. Some criticisms 1. The prelude, interludes, and postlude were written in the first person POV and didn't add much to the story and I just felt that they didn't need to be there. Some positives 1. The flow of the book was nice. Without the interludes, it would have been better, but there was enough action and intrigue to keep things moving. It never felt bogged down. 2. The characters are nicely done, especially Noph's character. I continually found myself wanting to read more of him. Overall, it is a solid beginning to a good series. I had hopes that this would set the standard for the rest of the books to continue this way.

Published by Thriftbooks.com User , 24 years ago
On the eve of Lord Piergeiron's wedding to Lady Eidola of Neverwinter, nothing goes right. Lizardman, doppelgangers, and an assasination attempt are but the least of problems. This story sets the way for the introduction of the Utter East and bloodforges. The Realms date is sometime after the time of troubles.
Trustpilot
Copyright © 2022 Thriftbooks.com Terms of Use | Privacy Policy | Do Not Sell or Share My Personal Information | Accessibility Statement
ThriftBooks® and the ThriftBooks® logo are registered trademarks of Thrift Books Global, LLC