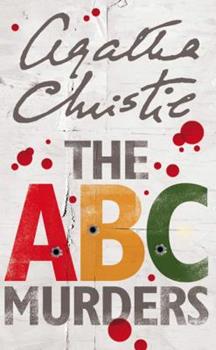 (Book #13 in the Hercule Poirot Series)

Now a Prime original limited series Agatha Christie's beloved classic The A.B.C. Murders sets Hercule Poirot on the trail of a serial killer.There's a serial killer on the loose, working his way... This description may be from another edition of this product.

Poirot and Hastings Hunt Together Again

Published by Thriftbooks.com User , 18 years ago
Captain Aruthur Hastings has returned to England from his ranch in the Argentine to tie up some affairs. One of his first stops is to see his dearest friend Hercule Poirot. The timing is perfect, as Poirot has been presented with one of his most unusual cases, a supreme exercise for the little grey cells. Apparently, a homicidial maniac is terrorizing England as he taunts Poirot with advance notice of the time and place of his next murder. Because the victims and towns they live in occur in alphabetical order (Mrs. Ascher is killed in Andover, Miss Barnard in Bexhill, Mr. Clarke in Churston, etc.) and because the killer leaves an ABC Railway Guide at each murder scene, the case becomes known as the the ABC murders. The set-up of this novel deviates from the normal Christie in that while Captain Hastings narrates the story as it has occurred, the reader is also privvy to the comings and goings of the rather strange Mr. Alexander Bonaparte Cust (notice the initials). The humor is rampant as Poirot and Hastings chide each other over Poirot's dyed hair, Hastings uncanny ability to see the obvious without realizing it, and the unabashed appreciation both men have for a beautiful woman. And even in the midst of murder and mayhem, Poirot has time to do a little matchmaking on the side. A box of hosiery, a dying woman's grasp of facts,a private murder concealed in a string of unrelated murders, and a meeting with the accused all climax in one of Poirot's most clever deductions as he solves this one and proclaims to his friend Hastings, "Vive le sport."

Published by Thriftbooks.com User , 22 years ago
THE ABC MURDERS is one of Christie's most complex books; the clues and red herrings fall thick and fast, and the plotline is perhaps the most misleading she ever wrote. The plot deals with a series of murders which seem to have a specific and clear pattern to them. The incredible thing about this book is that the reader is quite convinced that he knows what is going on and where the case is headed, up to about the halfway point, where the entire plot twists itself into a pretzel, and the reader is completely lost for a while (as is Hastings), until the shocking conclusion. After reading this one (and so many other Christie's), all I could say was, "Well, she's done it again!" Thrilling reading from start to finish.

This is a book that will make you not want to put it down.

Published by Thriftbooks.com User , 22 years ago
The ABC Murders by Agatha Christie is a very good book. The story is outstanding and keeps you interested, and is set in 1935 in England. Hercule Poirot, the great detective, receives anonymous letters from someone called ABC. These letters state a city and a date inside them, and Poirot suspects a crime. I liked this book mainly because it keeps you wondering what is going to happen next. The only dislike I have is that sometimes it was hard to follow, but later things clear up. Therefore, if you like mystery novels that make you not want to stop reading, you should definitely read this book.

Oh! what a way to baffle us!

Published by Thriftbooks.com User , 23 years ago
After reading this book, I felt like she might have written A to Z Murders! Of course I have read and studied all the books of Agatha Christie. I would say - in front of Murder of Roger Ackroyd, and other masterpieces, ABC murders may be found a bit slow, but nevertheless it matches the height of mystery and narrative of the masterpieces.

The ABC Murders Mentions in Our Blog