Agatha Christie: A Woman of Mystery 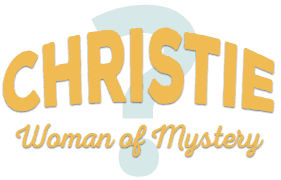 She stepped onto the literature scene with The Mysterious Affair at Styles, and has kept readers like us coming back to solve mysteries alongside some of her most notable characters such as Hercule Poirot, Jane Marple, Parker Pyne, and Tommy and Tuppence Beresford for years. (Since 1920 to be exact.) However, what people don't know is that Agatha Christie's life reads a bit like one of her mysteries. While going through a very public divorce, Christie disappeared from her home on December 3, 1926, only to turn up in Yorkshire ten days later. No one knows why she did it or what happened, although there are speculative stories regarding a murder-suicide that would make for a great plotline in one of her infamous thrillers. Others say she merely wanted to catapult herself back into the spotlight, and bring in new readers for her books.

Although this particular mystery will never be solved, it does create a curiosity about this woman made a Dame by the Queen in 1971. It seems to me that Agatha Christie lived and breathed mystery, drama, and thrill for so long that perhaps the emotional turmoil of a public affair and subsequent divorce pushed her over the edge, and the lines between reality and fiction became blurred for her, if only temporarily.

Perhaps by reading one of Christie's novels like The Murder of Roger Ackroyd, Peril at End House, Murder on the Orient Express, or The ABC Murders we can understand the woman behind them. And maybe there is a part of her, irrational or not, which we can relate to; because haven't we all had a moment or two that we have wanted to disappear, even for just a day, to cope or process life, or just to take a deep breath and regain our sanity? I will raise my hand as one of those!

So maybe it is time to put my sale and discount book sleuthing talents to good use, and add a new author to my ever-growing used book collection. August 24th to 30th, 2015 there will be a 15% off coupon offered on all her titles, as well as those of her best known peers, so it seems like a great time to make some lists, and start preparing ourselves to enter into the world of Agatha Christie and other great mysteries. Join me in "disappearing" for while!

Enter the code WHODUNNIT at checkout and books from this sale will be reduced by 15%.