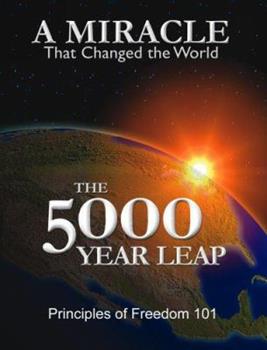 The 5000 Year Leap: A Miracle That Changed the World

The 5000 Year Leap: A Miracle That Changed the World. For many years in the United States there has been a gradual drifting away from the Founding Fathers original success formula. This has resulted in some of their most unique contributions for a free and prosperous society becoming lost or misunderstood. Therefore, there has been a need to review the history and development of the making of America in order to recapture the brilliant precepts which...

a must read for every American

Published by Thriftbooks.com User , 12 years ago
This book is clearly written, very practical and informative, and I am now reading it with my 7th grade grandson. Reading this book will provide a clear understanding not only of the founding and the founders of our great nation, but also how unique America is in the entire history of the world. I have always been proud to be an American, but this book educated me, filled in gaps in my knowledge of history that I didn't know were even missing, and reaffirmed my conviction that I must be the best American that I can be; I must be a better patriot today than I was yesterday. It is imperative that my firm convictions be based in truth-- and that I have the courage to stand on those convictions. I must be an educated and faithful voter.... and then stay in touch with those who represent me in my government. I agree with Thomas Jefferson: When the people fear the government, there is tyranny; when the government fears the people, there is liberty. Amen and amen.

Published by Thriftbooks.com User , 13 years ago
Being British, and involved in politics over here, I was very keen to read this book, to see the ingredients that the founding fathers mixed together to create such an incredible country. As I have read the book, I have been in awe at the incredible restraint and foresight that these men had. I am sure they were truly inspired, as where the others who contributed - as the Constitution was by no means the work of one man. I am saddened and worried by the drift from the founding ideal, to policies and politics that have been proven time and time again not to work. As a friend of mine said, the problem you get with Democracy, is when people realise they can vote themselves money! It is my hope that the people of America have a "second Revolution", a return to the basics, and the simplicity of the Constitution - because truly it is only this way that America can get itself out of the crippling debt and over regulation it is finding itself in. This really should be compulsory reading in schools, and colleges - but of course the liberal left would have a heart attack if that was to happen, as the book mentions God! If you can do it once, you can do it again! So go for it, and get back to the basics that made America Great!

Published by Thriftbooks.com User , 13 years ago
Love him or hate him, I saw an interview with Richard Nixon not too long before he passed away. He said his greatest fear is that we are not telling our nation's story over and over, and our children are not being taught in our public schools. I am a retired educator who majored in history and taught American History for several years. I am still an avid student of our history. I can tell you the stuff our kids are being fed is nothing but a bunch of touchy-touchy, feel good, politically correct pile of garbage. For example little emphasis on our Founding Fathers is given in many states and universities. Why? THEY OWNED SLAVES. Yes, they did, but they put together the best system of government the world has ever seen. Revisionist historians want to go back to Jamestown and blame this country for every conceivable ill. Many of these historians such as Michael Bellesiles of Emory University wrote a complete book of lies about the Second Amendment, The Arming of America. He got a Pulitzer for the book. It was discovered that his research was so specious that the prize was withdrawn and he was fired. He was so anti Second Amendment that he was willing to put his career on the line and lie about it. I have an idea this is but the tip of the iceberg. Our students are being fed lies, yes lies, about our history. This is a book that would be required reading in my American History classroom. If there are those who get all chilled by the mention of the Christian faith, then don't read it if it offends you. I taught a month long unit on the US Constitution each year to my 8th graders. They practically had to memorize it. They were tested over and over again and were required to do additional research. That was several years ago, and my former students STILL REMEMBER those precepts. Again, this book needs to be read by every American citizen, liberal or conservative, elephant or donkey. We need a new American Revolution, a patriotic one. Too many people in our country (like leeches) draw from the blessings and benefits of living in this country and wouldn't raise a finger to support or defend her. I honestly believe if we were to face a crisis such as World War II, we would hear a giant sucking sound, the rush of our "citizens" running to Canada and Mexico.

Published by Thriftbooks.com User , 13 years ago
As a member of Pi Sigma Alpha, the National Political Science Honor Society and someone who considers themselves well read and current on our nation's politics, this book, The 5000 Year Leap is the absolute best. If you wish to understand the founding of America. If you wish to learn how the founders wrestled with the issues. If you want to know whether or not America is really a unique and great nation, not merely in the world today, but throughout all of human history. If you are troubled by our current day's politics and wonder just how closely our leaders today, regardless of political stripe, remain true to our founding principles. If you have wondered about any of this, you need read only one book for your answer. READ THE 5000 YEAR LEAP!! I promise you will come away with a renewed sense of America and great hope for our continuing success as a nation.

It will change your views of America

Published by Thriftbooks.com User , 14 years ago
The constitution, what does it mean anymore? This document changed the course of the world and this book will tell you why the United States of America changed the world in 200 years. Sadly, it is also pointing out why we are loosing what has made us so strong. This book yes, should be required reading. Do you want a book that will honestly change your whole way of thinking about American Government, are you willing to be challenged? Take the dare, you will not regret it. If you are a liberal, Democrat or Republican, how about, just an American, this book is for you. Are you new to the concepts of Natural Law? This is a good jumping off point. The book is an easy read, easy to grasp for the beginner, yet I believe an advanced reader will still find it fascinating. It is a new perspective of our country, or rather just highlighting the original intent which seems to be new in this day and age.
Trustpilot
Copyright © 2022 Thriftbooks.com Terms of Use | Privacy Policy | Do Not Sell My Personal Information | Cookie Preferences | Accessibility Statement
ThriftBooks® and the ThriftBooks® logo are registered trademarks of Thrift Books Global, LLC