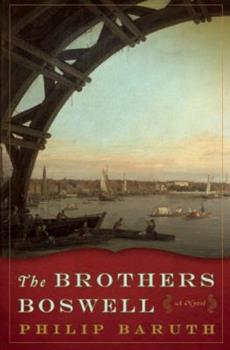 In this literary thriller set in eighteenth-century London, Samuel Johnson and James Boswell are threatened by Boswell's mad and envious younger brother John.

What do you know? [I loved this book]

Published by Thriftbooks.com User , 12 years ago
I enjoyed this book -- page-turner reading -- because the narrative played with my delight and understanding of what I could know about the characters from the story and from history, and what I couldn't. That's entertainment and it's also a weekend to remember. Funny, moving, can't-put-it-down, the works. I didn't expect it to work all these ways, but it did. FWIW, I'm reading Hilary Mantel's _Wolf Hall_ now, another page-turner. I mention this to say what good company _The Brothers Boswell_ is in. What a lovely read.

Published by Thriftbooks.com User , 13 years ago
For those of you who are put off by the term "literary thriller," let this book be your role model for what the genre should be. Clever, suspenseful, witty, insightful, beautifully written, "The Brothers Boswell" has everything a reader seeks. This is a book to buy, then settle into a comfy leather chair and savor.

Published by Thriftbooks.com User , 13 years ago
In 1763 London, John Boswell hates his older brother James who has become friends with renowned lexicographer Samuel Johnson; by default John also loathes Johnson due to the company he keeps. Obsessed with his sibling, John stalks both men and pays Thames River boatmen for information on what the pair discussed when they ferry them. John recalls when Johnson was his friend before his sibling usurped his relationship. Increasingly he considers fratricide as a means to right the wrong he believes James has done to him. He ponders whether to kill both men to ease the rage vibrating in his gut that seems to grow with every thought about the pair. THE BROTHERS BOSWELL is an intriguing biographical suspense thriller that stars real Georgian Era writers. The triangle comes to life as each of the key three players seem genuine especially their interrelationships. Though the ending is obvious for anyone familiar with the classic biography Life of Johnson;, fans will feel the tension throughout as increasingly John is losing control of his mind fogged by his hatred, envy, and deep conviction that he has been wronged by his sibling and his former friend. Harriet Klausner

Published by Thriftbooks.com User , 13 years ago
If you enjoy literary thrillers, this book has everything. The characters are complex and interesting, the action is riveting, and the humor is great. Baruth takes an indirect approach to the famous relationship between Dr. Samuel Johnson and his biographer, James Boswell. The main character is James's troubled younger brother, John, who stalks James and Dr. Johnson, all the while raging with envy and resentment. The twists and turns of the plot (and of John's mind) are surprising and totally believable. The historical details are amusing and so well handled that they don't get in the way of the story. The author doesn't let his evident enjoyment of 18th C London become a fetish. Sentence by sentence, the book is a pleasure to read. John's story is balanced by James's. As we follow John's actions and thoughts, we also keep track of James and his (often funny) schemes of self-promotion. Despite their moral flaws, the characters are somehow likable. Baruth is able to present a world of morally dubious characters without being harshly ironic or judgmental. It is clear that this is our world, with its fine shades of gray and intricate, hard-to-solve personal and social problems. The story reminds me of the movie Amadeus, because James Boswell is similar to Mozart in that movie, and John is his secret nemesis.
Trustpilot
Copyright © 2022 Thriftbooks.com Terms of Use | Privacy Policy | Do Not Sell or Share My Personal Information | Accessibility Statement
ThriftBooks® and the ThriftBooks® logo are registered trademarks of Thrift Books Global, LLC