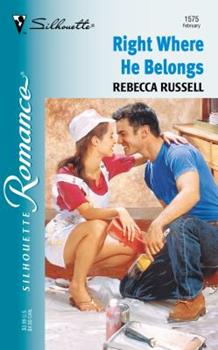 Right Where He Belongs (Silhouette Romance)

Right Where He Belongs by Rebecca Russell released on Jan 25, 2002 is available now for purchase.

Published by Thriftbooks.com User , 20 years ago
Tanner Fairfax has learned plenty in his life, the most important thing being not to depend on anyone but himself. He agrees to return to his family's ancestral home after his grandfather's death, but only to sell the place and make sure it doesn't get turned into a museum making a hero out of the old villain. He doesn't know what to make of beautiful Cassie Leighton, the woman who's making repairs to his grandfather's house and who seems to think the old jerk was some sort of saint. Cassie Leighton promised Frank Fairfax that she'd try to teach his grandson the value of family and the worth of living in a small town in Ohio where everyone knows you. New Haven is where the Fairfax family has always lived; it's where Tanner belongs. Of course he is too stuborn to see it, but he's attractive enough that Cassie doesn't mind spending the time needed to show him. What she fears, though, is that she'll fall for him. Cassie won't risk her heart to anyone who doesn't commit to the whole thing--living together, working together, sharing all of their dreams. Both Cassie and Tanner have been injured, but both recognize the attraction that flows between them. Can they overcome their fears, agree to a compromise of their dreams to get what they really want? In her first novel, author Rebecca Russell writes convincingly of life in small town central United States. Cassie and Tanner are multidimensional characters with a depth of history and emotion that is rare even in works by much more experienced authors. RIGHT WHERE HE BELONGS is a small jem of a novel. I'll keep my eyes open for more novels by this talented author.
Trustpilot
Copyright © 2022 Thriftbooks.com Terms of Use | Privacy Policy | Do Not Sell My Personal Information | Accessibility Statement
ThriftBooks® and the ThriftBooks® logo are registered trademarks of Thrift Books Global, LLC