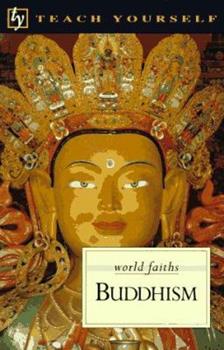 As the popularity of Buddhism has stretched across the globe, the religion has taken on many forms, which are now present in the West and growing in variety. Teach Yourself Buddhism examines this historical journey, illustrating the persistent relevance of Buddha's teachings. Drawing on varied sources to evoke the spirit of Buddhism and to allow Buddhists to speak for themselves, the book provides in-depth coverage of the diversity of Buddhism and...

Published by Thriftbooks.com User , 20 years ago
This book gives more of a historical and informational account of Buddhism, rather than teachings and beliefs. It talks of Buddha himself, the different flavors and divisions of Buddhism, Buddhism as it exists in different countries, Buddhist practices and ceremonies, and a basic introduction to beliefs centered around the precepts Buddhist monks follow. Again, it doesn't go too deeply into beliefs, and really only gives a few passages from notable belief texts. What other reviewers say about the FWBO is true, indeed the whole of the last 5 pages or so is a complete sales pitch on the organization. However, it certainly didn't pervade the book or cloud the information being presented.

A wonderful introduction, and then some

Published by Thriftbooks.com User , 22 years ago
I can hardly tell you how fine a primer this book is for those Westerners who haven't had the opportunity to grow up knowing what indigenous Buddhists do. I learned about the basics, the different sects and their philosophies, and the straight dope about what it takes to become a Buddhist. I highly, highly recommend this book for anyone testing the waters and who wants to know what Buddhism is all about.
Copyright © 2022 Thriftbooks.com Terms of Use | Privacy Policy | Do Not Sell My Personal Information | Accessibility Statement
ThriftBooks® and the ThriftBooks® logo are registered trademarks of Thrift Books Global, LLC