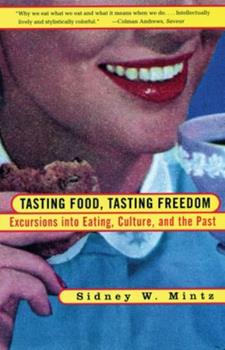 Tasting Food, Tasting Freedom: Excursions Into Eating, Power, and the Past

A renowned anthropologist explores the history and meaning of eating in America. Addressing issues ranging from the global phenomenon of Coca-Cola to the diets of American slaves, Sidney Mintz shows how our choices about food are shaped by a vast and increasingly complex global economy. He demonstrates that our food choices have enormous and often surprising significance.

Published by Thriftbooks.com User , 12 years ago
Thematically this book is fantastic. The linkage between food consumption and political and sociological change is in fact rarely consider in the march of progress. His linkage of sugar, the sugar trade, to both the evolution of what is considered upper and lower caste is fascinating. I also loved the idea that sugar and coffee allowed for the greater than 8 hour work day and allowed for a certain type of domination over others. I wish he'd also considered tea (the other caffinated beverage). Where the book could be expanded upon is to include greater comparison among a variety of cultures Eastern and Western. It would be interested to have greater discussions about the triangular trade (although I suspect he believes he is building upon this). I also think that his conclusions may not show a true appreciation for all the variables/probabilities in such a dire direction for food. I do not agree that the US may be doomed as a function of population to an Asian diet which would put us in competition with the world for food.
Trustpilot
Copyright © 2022 Thriftbooks.com Terms of Use | Privacy Policy | Do Not Sell My Personal Information | Accessibility Statement
ThriftBooks® and the ThriftBooks® logo are registered trademarks of Thrift Books Global, LLC