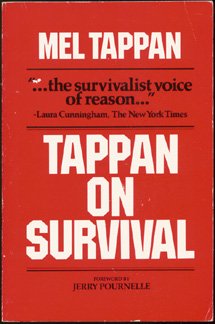 One of the greatest books ever written on practical survival is back in print for the next generation of self-reliant citizens! Mel Tappan was the godfather of the modern preparedness movement, and... This description may be from another edition of this product.

A Classic must read

Published by Thriftbooks.com User , 14 years ago
This text is truly a classic on the art of survival. It will prove valuable in the upcoming revolution.

Dated on specifics but still relevant.

Published by Thriftbooks.com User , 14 years ago
Mel Tappan's books are a bit dated on a few things but his methodical way of looking at long term survival is still sound. The chapters on the reasons for living in a small town are still relevant as is the chart explaining the difference between working guns and guns for retreat defence.

Must have for the 'survival family' library...

Published by Thriftbooks.com User , 15 years ago
Even with some of the material outdated, most of what Mel Tappan wrote still applies today, just that some of the threats have changed. I still go back and re-read this and Tappan's "Survival Guns", which also should be on the survival family's bookshelf. For the family that has little knowledge of firearms, the advice he gives is still practical today. His advice on retreating is the best I have read, and once again, the most practical. His writing is entertaining and straghtforward, and he backs up his conclusions with sound facts. If you want cold, hard, logic (and when it comes to the survival of yourself and your family, who doesn't?), then this is the book for you. It is not the end all to be all, but I consider it mandatory to the modern survival family.

Published by Thriftbooks.com User , 16 years ago
Mel Tappan's had a big influence on the survival movement with his newsletter Personal Survival Letter and a later column in various magazines, and his first book SURVIVAL GUNS offered up many practical firearm tips, so prior fans and newcomers alike are sure to eagerly anticipate the publication of Tappan on Survival. This comes back into print for a new generation with a new foreword by survivalist Bruce Clayton, and returns the ideas and practical applications of a man who before 1999 served up a series of recipes for survival in the event of any disaster, whether it be nuclear or caused by storms. An easy question/answer format supplements hard facts. Diane C. Donovan California Bookwatch

Published by Thriftbooks.com User , 22 years ago
"Tappen on Survival" is 5 stars. Written in the '70's by Mel Tappen. I first read "Survival Guns" and then sought out his second book. Both books are excellent!! Mel Tappen was the level headed expert on survival. He wrote on survival and weapons for several different magazines during the 1970's. Expert advice still today!!
Trustpilot
Copyright © 2022 Thriftbooks.com Terms of Use | Privacy Policy | Do Not Sell My Personal Information | Cookie Preferences | Accessibility Statement
ThriftBooks® and the ThriftBooks® logo are registered trademarks of Thrift Books Global, LLC