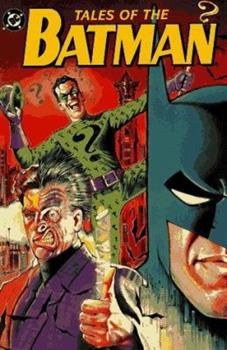 Tales of the Batman

This description may be from another edition of this product. Hardcover edition containing 16 stories.

Sort of a 'best of' past Batman short stories.

Published by Thriftbooks.com User , 11 years ago
Vulture: A Tale of the Penguin by Steve Rasnic Tem is probably one of the best short stories of this nature ever written, yes ever. I cannot recommend this story enough. This story alone is worth the price of the book, although most of the stories are quite good.

Published by Thriftbooks.com User , 21 years ago
I bought this book when Batman Forever came out, and I loved it, but when I finished it, I could never find it. The one I recommend is the one when Bruce Retires from being Batman (No, not in the case of Batman Beyond) and a group was making a Batman Biography series and he tells them about the good old days.

Published by Thriftbooks.com User , 24 years ago
this ones a non-bore! all batman fans will enjoy this book. I hardley knew anything about batman and i still enjoyed it. these short story books are better than single story ones. a ttally good book except for the stories without bats in em.(theres like 2 of them in the book)
Copyright © 2020 Thriftbooks.com Terms of Use | Privacy Policy | Do Not Sell My Personal Information | Accessibility Statement
ThriftBooks® and the ThriftBooks® logo are registered trademarks of Thrift Books Global, LLC