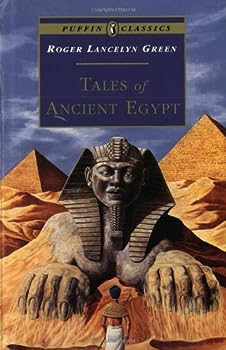 Cover may vary. These stories include the great myths - of Amen-Ra, who created all the creatures in the world; of Isis, seaching the waters for her dead husband Osiris; of the Bennu Bird and the Book... This description may be from another edition of this product.

Published by Thriftbooks.com User , 14 years ago
A kid's review: I really liked this book because it had a lot of adventure, trickery, and sorcery. One of the stories was about a thief. He was an architect who built a treasury that was "unbreakable." Only he could get through, and when he did he stole some of the gold.

Published by Thriftbooks.com User , 16 years ago
This is a book of short stories translated from Egyptian hieroglyphics. Some of the oldest stories in the world are told in the three different sections: Gods, Magic, and Adventures. The subject matter may be too confusing for grade school children; Egyptian stories either follow a different pattern of plot development than we are used to or else some of it is lost in translation. One of the fun things to look for while reading this book is similarities in these stories to ones with which we are more familiar. I found similarities to Biblical stories, a unique take on the kidnapping of Helen by Paris, and my daughter found Ali Baba in one of the stories. This book will also shine some light on the very complicated Egyptian religion as well as what they considered to be a virtue or a vice. For example, they often praise cunning--a virtue praised again and again within these stories. Have you children see what they can summarize about Egyptian priorities from these stories. Summary: Highly recommended home school book for pre-teens and teens which will add depth to their study of this ancient civilization. A Landmark Books classic.

Published by Thriftbooks.com User , 17 years ago
This book is a translation into English of many Egyptian myths. It is a great learning tool for kids of any age, and especially great for homeschoolers who are using Story of the World for History.

Published by Thriftbooks.com User , 17 years ago
Tales of Ancient Egypt is about inspiring stories that will thrill your heart. The stories are very old and very magical. The book brings you to the world of Ancient Egypt with stories of the Pharoahs and the gods. It covers all of Ancient Egypt's timeline with stories from each time period. It is about wars, and the fall of many cities in battle, and the god's magic. I suggest that if you want to read a very entertaining book than read this one. It was a great book and you will think it was great as well.

Published by Thriftbooks.com User , 19 years ago
This book really inspired me every time I opened it. The charatersalways amayze me and the plot never stop's from brinnging chills up and down my body. This book writen by Roger Lancelyn Green has some thing not many books could do to me, it makes me wan't to read it over and over again. It just openeds my mind every time. The Tales of Ancient Egypt tells you all about kings, queens , and MAGIC. It all started with the creature of the world named Ra. This book tells you about Ras creations and what happened during his century. Roger Lancelyn Green made this book full with adventure, emotion, back stabing, revenge, and love. I think you should read this book and I asure you would want to read it over and over again.
Trustpilot
Copyright © 2022 Thriftbooks.com Terms of Use | Privacy Policy | Do Not Sell My Personal Information | Cookie Preferences | Accessibility Statement
ThriftBooks® and the ThriftBooks® logo are registered trademarks of Thrift Books Global, LLC