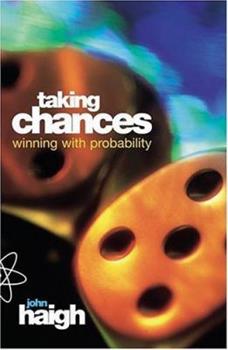 An easy-to-read, fun look at some common probability traps and fallacies and how they can be used to put the odds in the reader's favor. Written by a math expert, who uses real-life examples that can be understood by general readers, Taking Chances: Winning with Probability shows how to make better betting decisions in such games of chance as: lotteries, football pools, dice, roulette, card games, tv game shows, horse racing, and betting with bookies...

Published by Thriftbooks.com User , 14 years ago
There are many textbooks on college-level mathematical probability, but a smaller number of what I call "textbooks lite" aimed at a reader who is willing to work to learn some interesting parts of a subject. This wonderful book teaches the basic calculations in mathematical probability, but with a combination of breadth and concreteness unrivaled by any other book I know. The book consists of short sections, each giving verbal discussion of problems involving probability, games of chance and related material, and deriving solutions using only arithmetic and occasional elementary combinatorics and algebra. It covers an impressive breadth of topics: lotteries, dice and card games, casino games, TV show games, racetrack betting, some game theory (Prisoners Dilemma, Hawk-Dove games, Male-Female reproductive strategies), combined with the basic laws of probability and the familiar birthday and coupon collector's problems. Part of the content is distinctly British rather than American (cricket and snooker; premium bonds; the particular TV shows). In addition to familiar types of elementary probability calculations such as the craps example, there are more elaborate stories and calculations involving strategies as games progress. I particularly like the chapter giving a gentle yet entertaining introduction to two-person game theory.

Published by Thriftbooks.com User , 16 years ago
While the book is mainly written on probability in games, which has already been covered in many books, the author coveres the basics of probability and coin tossing very nicely. He also covers the theory of dices thoroughly and approaches "Games with few choices" (Game Theory) with great enthusiasm. Finally the chapter "Probability for Lawyers" with it's terms such as the prosecutors fallacy and the defence attorne's fallacy are a must read for every person interested in the fascinating subject of probabiliy. PS: second edition covers now Bayes's theorem (previous readers criticised the author of missing this important theory in the first issue)

Published by Thriftbooks.com User , 21 years ago
This is a very practical book on probability using common games (cards, dice, coin-toss, etc.) as examples. Explanations are thorough without being too technical. The appendices go into more mathematical detail for those so inclined. The author is British so everything has that slant (money in pounds and pence, Grand National, and so on), but that's not a problem. There's a lot of information packed into the 330 pages of this paperback since the type is fairly small.

Published by Thriftbooks.com User , 21 years ago
An excellent account of probability theory. Whilst definitely geared towards gambling it also sheds new light on some fundamental probability topics. The text sometimes does get a little numerical - at the expense of the theoretical - but this is not necessarily a bad thing.The only question I have about the book is why is there no mention of Bayes? Surely a fundamental contributor to probability theory.
Copyright © 2020 Thriftbooks.com Terms of Use | Privacy Policy | Do Not Sell My Personal Information | Accessibility Statement
ThriftBooks® and the ThriftBooks® logo are registered trademarks of Thrift Books Global, LLC