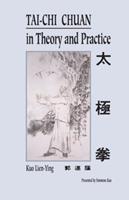 Originally published before Kuo Lien-Ying left China and then again in 1966 soon after his arrival in the United States, Tai-Chi Chuan in Theory and Practice has now been edited and expanded by his widow and disciple, Simmone Kuo. Her version includes new material on the philosophical origins of Tai-Chi Chuan, particularly how it relates to the I Ching, the most ancient text of Chinese wisdom. The book also provides explanations of the meaning of...

Published by Thriftbooks.com User , 20 years ago
Simmone, the wife of Kuo Lien Ying, is my professor at SFSU. She teaches Elementary Tai-Chi Chuan, Advanced Tai-Chi Chuan, and Shaolin Chuan on campus. This book is an excellent supplement to what she teaches and lectures. Tai-Chi is a very relaxing exercise. It teaches patience and concentration. Pick up this book if you feel you need that in your life.

An interesting look at tai chi

Published by Thriftbooks.com User , 20 years ago
Kuo's book on tai chi chaun is an interesting look at his style of the martial art. The text of the book seems to be drawn mostly from the tai chi classics, though organized through the author's own understanding of the art. The photos included are good, and illustrate the postures of his tai chi form. This book also contains a brief introduction to Chinese philosophy as it relates to tai chi, which is useful for readers new to the subject. This book is not a training manual, but more of an overview of the style of tai chi practiced by the author.

Tai-Chi Chuan in Theory and Practice

Published by Thriftbooks.com User , 21 years ago
This book is for those who are into the theory behind the practice of T'ai-Chi Ch'uan. There are no form instructions but it does have some information for standing meditation which will dramitically improve whatever T'ai-Chi Ch'uan form you do practice.

Kuo Lin Ying was a visionary. His books are profound.

Published by Thriftbooks.com User , 21 years ago
As a student in the linage of Master Kuo, I am continually amazed by his vision for T'ai Chi, especially T'ai Chi in America. His wisdom has changed the lives of me and millions of others in this country, so much for the better. Thank you Master Kuo, wherever you are, for this and your other works.Bill Douglas

Published by Thriftbooks.com User , 23 years ago
Kuo Line-Ying is recognized by all as one of the West Coasts preeminent Taichi Chuan practitioners. After his death in 1983, his widow Simmone Kuo has carried on his work. This book is a reprint of his own book, that documents the Kuan Ping style that he taught. This style is the one said to have been founded by Yang Lu Chan before he began teaching publicly in the Imperial Palace. For Taiji scholars this text is a must
Trustpilot
Copyright © 2022 Thriftbooks.com Terms of Use | Privacy Policy | Do Not Sell or Share My Personal Information | Accessibility Statement
ThriftBooks® and the ThriftBooks® logo are registered trademarks of Thrift Books Global, LLC