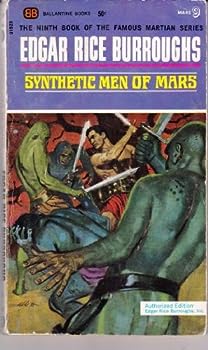 (Book #9 in the Barsoom Series)

This description may be from another edition of this product. John Carter desperately needed the aid of Barsoom's greatest scientist. But Ras Thavas was the prisoner of a nightmare army of his own creation -- half-humans who lived only for conquest. And in their...

Published by Thriftbooks.com User , 16 years ago
While not the best known of the Mars series, this is, in my opinion one of the better ones, and I am one of those who like them all. As with the rest of the Burroughs's books, the reader must constantly keep in mind when they were written. This is some fo the best pulp fiction out there. If you have never read any of this series, then you are missing something. If, like me, you first read them as a small child, then you are in for a nice nostalgic ride. I like to crack these out of by book tomb ever few years and read them just for the fun of it. Highly recommend this one.

One of the top three books in the series

Published by Thriftbooks.com User , 20 years ago
The incomparable Dejah Thoris is injured and only the dangerous scientist Ras Thavas (The Master Mind of Mars) can save her life. So John Carter, the Warlord of Barsoom, sets out with a single companion, Vor Daj, to bring Thavas back from the Toonolian Marsh in time to operate on the dying princess.Alas! Nothing goes right, and Carter and Daj are forced to make the most difficult choices of their lives. All Barsoom is threatened by Thavas' latest mad scheme, and it falls to Vor Daj to keep a lid on things until Carter can bring all his power to bear against the threat. In one of the best race-against-time stories ever written, the reader is forced to turn page after page to keep pace with all the setbacks, double-crosses, and unbelievable strokes of good fortune.Along the way, the author pokes a little fun at a few long-cherished social conventions and hooty-tooty groups. But the most resounding comment of all is the statement that true friendship knows no boundaries, and that love is solidly based in friendship. This is simply a great and thoroughly enjoyable book to read.

Published by Thriftbooks.com User , 21 years ago
A likeable, action-packed book--perhaps not as memorable as the author's Tarzan series, but admittedly, unquestionably =different=. That is to say, ERB's writing style isn't really different, and his pacing is typically breakneck, but it is a different topic, with some original ideas. What's also fun, nearly 80 years later, is to read the thinly-disguised social commentary that ERB inserts into his work. One of the Tarzan books includes a section on a society destroyed by income tax--a new idea in ERB's time, and one that he personally was affected by. This book contains a short section on how streets should be engineered to speed traffic along. It isn't exactly a description of a freeway, but it's darned close!Anyway, like all great pulp, a sense of adventure pervades and you're left both satisfied with the story and wanting more. They just don't write 'em like this anymore

Published by Thriftbooks.com User , 22 years ago
If you enjoy books where there's never a dull moment, with lots of fighting & romance, then you've GOT to read the John Carter series! This particular book isn't really about John Carter, but one of his friends. It's about these ugly, artificial "people" who overthrow the "mad scientist" who created them. An exciting, fun story, with a large cast of characters complete with good guys, bad guys, weird guys, and (as always with Burroughs), at least one hot babe!

Despite the odd title, one of the best of the Mars novels

Published by Thriftbooks.com User , 22 years ago
I found this book very engaging. Of course, you have to make allowances for the writer's style-- the book was written in the late 1920's. Synthetic Men had some of the best (scariest) monsters and one of the best plots of the eleven Burroughs Barzoom (Mars) novels. Ras Tharvas, the wicked scientist, is always a hoot. But the story has a serious tone as a young man in love is desperately trying to save his sweetheart from a terrible fate -- marriage to a Hitler-like emperor-criminal. He becomes a monster to reach her and save her, but she's terrified of him, naturally. How he works all this out, stymies the wicked guys, and gets the girl, is quite a heck of a read!
Copyright © 2020 Thriftbooks.com Terms of Use | Privacy Policy | Do Not Sell My Personal Information | Accessibility Statement
ThriftBooks® and the ThriftBooks® logo are registered trademarks of Thrift Books Global, LLC