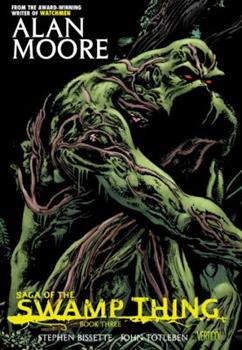 Continuing the hardcover collections of Alan Moore's award-winning run on THE SAGA OF THE SWAMP THING, this third volume is brimming with visceral horrors including underwater vampires, a werewolf with an unusual curse, the hideous madman called Nukeface. Best of all, this volume features the comics debut of John Constantine, Hellblazer, who launches Swamp Thing on a voyage of self-discovery that will take him from the darkest corners of America to...

Published by Thriftbooks.com User , 17 years ago
The third collection of the Moore-Bissette-Totleben run on "Swamp Thing" proves to (so far, I haven't read the whole series yet) the most chilling of the run, as the Swamp Thing begins to understand the extent of his power as the Earth elemental, while encountering all manner of horrors, including the first appearance of DC-Vertigo mainstay, John Constantine. The strength of this collection lies in the unusual approach to some pretty basic horror icons. "The Nukeface Papers" introduces an urban-legend brought to life, while at the same time raising the specter of the dumping of nuclear waste. In "Still Waters", Swamp Thing does battle with a group of vampires that have taken to living underwater, and the hellish offspring they have produced. In "The Curse", Swamp Thing encounters a werewolf with a tragic twist. And in "Southern Change", Swamp Thing must battle the poltergeists of the past, as an old plantation becomes the set of a soap opera set in the Antebellum South, and the cast become vehicles for the unresolved tragedy of slavery. And through most of this is Constantine, his abrasive manipulation and sense of guilt fully formed (although looking more like musician Sting under Bissette and Totleben's are then later artists depict him). Constantine knows something is coming, and he knows he needs to make Swamp Thing ready for it. But, in what has become typical of the character, Constantine sees no particular reason to simply tell anyone what he's up too. Thus, the bond between Swamp Thing and Constantine is built on necessity and mistrust, which reverberates to this day. While Moore is matchless in his ability to think outside the box, these ideas would mean nothing if not for Bissette's and Totleben's depictions. The image of a group of vampires draining on a swimmer, and then diving deeper into a city long ago submerged is chilling. The deformed Nukeface, long ago addicted to waste, and rotting from the inside out, is appropriately sobering and nauseating. Slavery, always a disturbing topic, is made more disturbing as modern people are forced into roles that are morally repugnant to them, and forced to live out the past, while corpses of long dead slaves rise from the ground. It's harder to think of a more perfect fusion of writing and art in this medium. This represents the best comic books have to offer. Fans would be foolish not to at least give these stories a try.

Alan Moore could do no wrong...

Published by Thriftbooks.com User , 17 years ago
This is the third trade collecting Alan Moore's groundbreaking run on the character, and is noteable because it introduces John Constantine, who would prove integral to the remainder of Moore's run. However, if you're looking for the snarky magician that was a hallmark of Ennis, Ellis and Azzarello's run, look elsewhere. Part of this is because John is regulated to a supporting character, who really exists to introduce Swamp Thing to the various menances that he will confront along the way. The nature of good horror is to disturb us, to make us feel uncomfortable, and Moore does this in spades. If you don't believe me, check out the story in which he ties cycles of the moon to a woman's menustral cycle.

Published by Thriftbooks.com User , 18 years ago
In this third collection of Alan Moore's important and groundbreaking run on the Swamp Thing series, both character development and sheer gothic American horror become the keys. During this period (original issues #35-42), Swamp Thing learns that he is an elemental spirit in true communion with the plant kingdom. This would become monumentally important to the further development of the character. Moore was tackling both social issues and horror devices at this point, and he was delivering tremendous plotlines in all areas. There are werewolves, vampires, and zombies appearing in the series during this stretch, but this is not cheap slasher fare but strong and innovative literary horror writing. On the social commentary side, the first two installments here, "The Nukeface Papers Parts I and II" tackle chemical and nuclear dumping. Moore dives into women's issues quite believably in "The Curse" (an extreme rarity in comics even today), while "Southern Change" and "Strange Fruit" are very disturbing examinations of slavery and racism in the Deep South. This edition of the Swamp Thing series does not contain any written introductions, but there is a gallery of individual covers featuring the always amazing art of Stephen Bissette and John Totleben. For some reason only four of the eight relevant covers are included, and the withholding of cover art is an overall disappointment in this series of graphic novels. However, that is ultimately a minor concern as the incredible work of Moore, Bissette, Totleben, and their other important colleagues has the power to blow the minds of readers of any kind of fiction.

The Best of Swamp Thing

Published by Thriftbooks.com User , 20 years ago
This collection reprints the best issues of Swamp Thing. For those not at all familier with the character, it is an excellently written and drawn comic about a good swamp monster battling evil (and is much better than that description makes it sound).Notable in this third volume of the series, which reprints the beginning of the "American Gothic" story arc, is Moore's greater use of social critique, elevating these stories above mere entertaining, well-written horror stories. By combining fantastic horrors to such real-life horrors as racism and sexism, these stories are far more effective than any in the earlier collections at terrifying the reader.In "American Gothic", Swamp Thing is sent scurrying to different parts of the U.S. by a manipulative figure (Jon Constantine) to battle all of the classic horror figures (vampires, werewolves, zombies, etc.), but each are handled in an absolutely brilliantly unique and new manner. For example, there is a whole town of vampires living underwater, completely shielded from the sun, in the process of, for the first time, living communally and cooperating to breed a second generation of vampires that are more powerful and horrific (the dedication of the vampires to family is contrasted by the dysfunctional families of the normal humans). The title story, "The Curse", is a unique Werewolf story, tying in the monthly transformation according to the phases of the moon to the menstrual cycle. The Curse was controversial due to its misinterpretation by illiterate readers as being a sexist comment on PMS when in reality it is an extremely feminist story condemning society for its male-driven fear and shunning of the feminine, and the subjugation of women into sexual objects or housewives.The American Gothic story arc does not conclude in this issue (although the individual stories can be enjoyed on their own) so hopefully a volume 4 will follow. By this point, Moore was also using word games in his text more frequently (read carefully) adding an extra level of enjoyment. This collection also contains the first appearance of Jon Constantine, and it is a period I miss. Here Constantine is a totally mysterious, manipulative character whose only real power is his mysteriously obtained knowledge and who always adds an element of dark humour (he is still a great character, but far less mysterious, and he now has magical skills, the extent of which appear to change from appearance to appearance).This collection represents, if not Moore's best, then the best of Swamp Thing.

The birth of a legend

Published by Thriftbooks.com User , 20 years ago
The third volume in the Alan Moore Swamp Thing collection, this one may not be the best, but it's certainly one of the more memorable. The stories are amazing, as can be expected, but the true star of this graphic novel isn't the creature in the Louisiana swamps, but a chain-smoking, trench coat-clad Brit with a sharp wit by the name of John Constantine. Who would have thought that a simple request of a character who looked like Sting would have birthed perhaps the most important character of the entire Vertigo line of comics from DC? Probably no one. But there's certainly something magical about his scenes in this trade, which can't be denied from any "Hellblazer" or "Swamp Thing" fan. At the very least, it gives us wonderful stories with that kind of addictive pace that only makes us want to read more. Perhaps rummaging through the back issues at your local comic shop would be a good idea after this read, if you can't wait until the next volume to be published.

Swamp Thing Vol. 3: The Curse Mentions in Our Blog 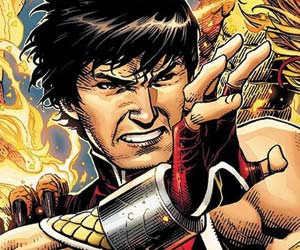 Shang-Chi and the Ten Titles of Obscurity
Published by Terry Fleming • August 29, 2021

With movies like Suicide Squad, Birds of Prey, The Suicide Squad, and the upcoming Shang-Chi and the Legend of the Ten Rings, some critics are saying we’re scraping the bottom of the comic book barrel. Personally, as a lifetime comic book fan, I love the more obscure and bizarre comic book characters. And it’s in that spirit that I present the following – ten titles that in some way feature the arcane, ambiguous, and/or asinine from the world of comics.