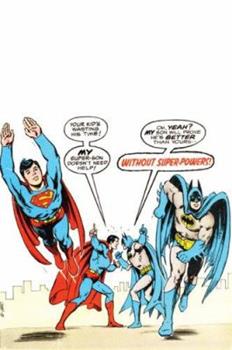 Superman/Batman: Saga of the Super Sons

Published by Thriftbooks.com User , 14 years ago
In 1972, Bob Haney created a What If series for World's Finest, The Super-sons. In the future, DC comios would have their Otherworlds series of books. But in the sixties and the seventies, DC had Imaginary stories. In the 1970's, comics were simpler..There were no multi issue storylines nor crossover books The idea of the Super sons roots had a basis in DC's comics Hawk and the Dove comic series. The idea of two brothers who had two methods in fighting crime. Here is also a generation gap of Fathers and sons. Standard fathers (Superman & Batman) vs their teenage sons who did it their way. One cute thing about all these stories is you never saw the wives of Superman and Batman. Does it change anything, not really! These chestnuts of the 70's which are all collected here is the good thing for fans who like syories bunched together. The bad thing about these stories is it is like popcorn.... once you read one, you read them all This book is a collector showcase of a 70's kitch. For fans of Superman and Batman, this is a footnote in DC comics history. To most, its just another 1970 reprint collection on a nice stock all in one book. I enjoyed having all the Super sons stories in one book. However, there are many other series DC comics could have reprinted and still haven't. The problem is this is what DC comics does, it does not reprint the weird or different..I wish some of the 1960'-70's titles would be collected. I want the Jerry Lewis and Bob Hope collections! Bennet Pomerantz AUDIOWORLD

Published by Thriftbooks.com User , 14 years ago
As a kid, I loved Superman Jr. and Batman Jr. ("sons" of Superman and Batman, duh!), the titular heroes of the stories. Written by Bob Haney (with the best stories drawn by Dick Dillin), the Super Sons sporadically appeared in World's Finest comics (starting in 1973 and running sporadically until '76). They were obviously a misguided attempt to bring "relevance" (a big 70s term) to the Superman/Batman universe -- without getting as hard-core or political as the now-classic Denny O'Neil/Neal Adams Green Lantern/Green Arrow comics. Even though the Super Sons exist completely outside normal continuity, DC refused to declare that their adventures were "imaginary stories"; a distinction I've always found hilarious -- as opposed to the "real" adventures of the superhero in question?! In fact, Haney/Dillin always make a point of obscuring the sons' mothers' identities, which leads to a number of stories where the kids get in arguments with their parents, with the moms' faces always turned from the viewer or engulfed in shadow! The stories in this book usually involve the junior heroes riding around out West, Easy Rider-style, on a souped-up chopper or dune buggy, defying their parents' wishes that they just settle down to "normal" lives. They tend to follow a similar pattern: the boys get in a "generation-gap" argument with their dad and storm off together. They fall into some misadventure, jump to a number of conclusions, make some dumb mistakes, and are eventually bailed out of trouble by their stronger, wiser dads. (In fact, they make a big point that Superman Jr.'s powers are only half those of his dad's, seeing as how he has a mortal mother.) It's pretty clear what the editorial tone of these stories are: give kids room to rebel -- a little -- but make sure they understand who's boss in the end. In my favorite story of the collection, "The Shocking Switch of the Super-Sons," Bruce Jr. and Clark Jr. swap dads for a time, and then all four visit an encounter camp to "discover" themselves! The dialogue throughout all the stories is a hilarious pastiche of hipster/black dialect: Clark Jr. and Bruce Jr. never go more than a panel without proclaiming something "crazy" or "far out," or calling each other "baby," not to mention any nearby females "chicks" or "dolls." It's classic stuff. The collection sort of comes out of left-field; I wonder what compels DC to release it now? I can't imagine that there's a huge audience for the book, outside of those with an ironic sense of nostalgia like myself. The book is nicely produced, with a beautiful Nick Cardy cover (was he was one of the all-time great cover artists, or what?!), and the addition of a couple of oddball Super Sons stories from the 80s & 90s (including one written by Bob Haney shortly before his death), as well as a cover gallery. But the one thing the book really needs is a foreword or introduction. The stories are just too weird to escape comment!
Trustpilot
Copyright © 2022 Thriftbooks.com Terms of Use | Privacy Policy | Do Not Sell My Personal Information | Accessibility Statement
ThriftBooks® and the ThriftBooks® logo are registered trademarks of Thrift Books Global, LLC