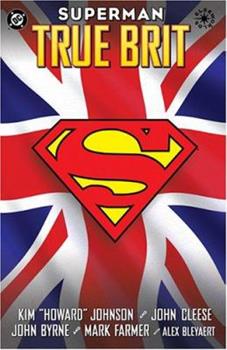 As a journalist for the Daily Smear tabloid, Colin Clark may learn that the key to success may be revealing his greatest secret. What will the neighbors think?

Published by Thriftbooks.com User , 13 years ago
I'm mainly an '80s Byrne fan, and I highly recommend his '80s stuff, but he's done quite a bit of work since then, so I thought I'd check this out. The thing that shocked me about this right off the bat is that this is the most cartoony art I've ever seen from him. It's just not his '80s-style Superman at all. That's OK really- as long as people know what they're getting up front. The reason I actually kind of like this artwork is that this is some of the most *detailed* work we've seen from him in a while. The inks are crisp & tight; the colors are brilliant. The humor is whimsical at best, annoyingly redundant at worst, and is too over-the-top British for most people, I'd think. Having said all this, I kind of like it- at least as a change of pace. Colin Clark is Superman here, and he's constantly reminded by his parents that the worst thing he could ever do is to "stand out from the crowd". This is, of course, what Superman does by nature, and his parents are so embarrassed they repeatedly move their residency without even telling their son, just to get away(!). They're constantly afraid of the attention he'll bring. It's a running gag throughout the whole book, which is packed with extremely British references on almost every page. Interesting side characters include: Louisa Layne-Ferret, the hot looking, manipulative, younger cousin of Lois Lane; a modern Jimmy Olsen; and a comical appearance by The Bat-Man! I liked the crazy take on Bat-Man here, even if the joke is overly forced. His mid-'90s & early 2000s work tended to be a bit loose & sketchy; this is certainly not the case here. If you're looking for something different from Byrne, this is it! Still, I generally recommend his '80s Superman over this.

This is not your father's Superman...

Published by Thriftbooks.com User , 16 years ago
This is Mr. F.G. Superman. If that name brings a smile of recognition to your face, then this book is for you! Rather than being a vessel to explore the character of Superman, "True Brit" is aimed squarely at Great Britain, its culture and foibles. The land of the stiff upper lip, cricket, and Page Three girls is shown to be a very silly place, indeed. There are also plentiful references to characters and events from the Monty Python canon, some of them positively subtle, others....not so subtle. Highly reccommended for fans of Python in particular, and British humor in general.
Copyright © 2020 Thriftbooks.com Terms of Use | Privacy Policy | Do Not Sell My Personal Information | Accessibility Statement
ThriftBooks® and the ThriftBooks® logo are registered trademarks of Thrift Books Global, LLC