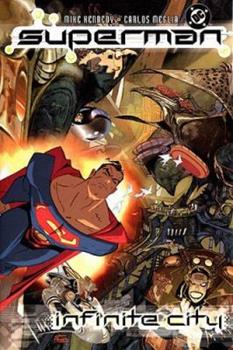 Superman and Lois Lane stumble on a doorway in an abandoned town that leads to another world, Infinite City, where magic and science happily co-exist, but one part of its inhabitants want to branch out to our world while others want to stay in their own dimension. Ages 13+

JOR-EL HAD ANOTHER PLAN!

Published by Thriftbooks.com User , 16 years ago
Superman: "Infinite City" is a new hard cover graphic novel from the team of writer Mike Kennedy and Argentinian artist Carlos Meglia. This was the first time I had seen Meglia's art and I was extremely impressed. Infinite City is an interesting tale in that Superman plays basically a supporting role up until the very end of the story. "Infinite City" begins as Superman has to take down a two-bit criminal armed with a weapon of obvious alien origin. The weapon was made in a place called Infinite City and Superman and Lois travel there to investigate. What they find is just an old ghost town and a deserted, roadside diner. But when Lois walks through a doorway she soon finds herself transported into a vast world of strange technology and even stranger inhabitants. Lois is quickly captured by these strange forces and convinced that these aliens can help the Earth with their technology, but that their robotic mayor prevents them from opening gateways into our world. Superman soon follows and gets a vastly different side of things from the mayor, a robot who claims to be Superman's father Jor-El. The machine claims that he is the consciousness of Jor-El. He explains that his plan to save the people of Krypton involved re-creating Krypton inside of a pocket universe, but he did not have enough time. Instead the infant Kal-El was sent to Earth where Jor-El had expected him to become a king. Not only does Superman find out that his father is still alive (sort of) but he also finds out that Infinite City's powerful protector is Superman's brother (sort of), created from a lock of his hair. Throughout the story Superman finds himself pushed to the sidelines as his powers are wildly erratic in this strange world and he finds he's doing more harm than good. But when Jor-El discovers that these rebels plan to break through a new gateway into our world Superman is determined to get involved, especially since Lois is in their clutches. Infinite City is an interesting concept as it re-thinks what was going through Jor-El's mind before the destruction of Krypton. We see that sending his baby Kal-El away was done as a last resort. How will this set with Superman traditionalists? Well it should not bother them at all since in the end nothing about Supe's origin is changed. Mike Kennedy merely is filling in some gaps in Kryptonian history. The story itself is a bit frenzied and a couple of times I found myself having a hard time figuring out just who were the good guys and who were the bad guys. The art of Carlos Meglia really pushed this book over the top for me. His style doesn't seem all too similar to anyone else's. His art has a very cartoon-like quality to it, almost like reading an animated feature. His work is lively and expressive and captured the chaotic look and feel of Infinite City perfectly. I certainly look forward to seeing more from Mr. Meglia. Reviewed by Tim Janson
Copyright © 2020 Thriftbooks.com Terms of Use | Privacy Policy | Do Not Sell My Personal Information | Accessibility Statement
ThriftBooks® and the ThriftBooks® logo are registered trademarks of Thrift Books Global, LLC