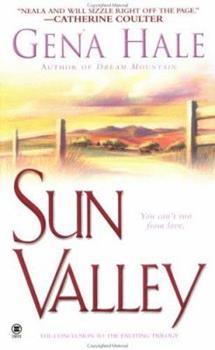 (Part of the Dangerous Sanctuary (#3) Series and Shandian (#3) Series)

An acclaimed author who counts Catherine Coulter and Judith Gould among her many fans, Gena Hale thrilled readers with Paradise Island and Dream Mountain. Now, she concludes this exciting contemporary... This description may be from another edition of this product.

Published by Thriftbooks.com User , 20 years ago
Though not an official CIA agent, Neala Delaney has been in more dangerous operations than James Bond due to her uncle always asking for one more favor under the guise of national security. Reluctantly Neal constantly falls for his blarney and agrees, but the scenario never goes according to her uncle's plan.This time she is only to obtain a package from a US Senator's wife. However, whenever her uncle uses her, even as a simple messenger, something unexpected goes wrong. This time she and her target hide in a closet while witnessing the murder of the Senator. After the killers leave, Neal enables the spouse to quietly vanish from the crime scene before calling the Feds.Neal is hidden on the Montana ranch of Will Ryder, who reluctantly agrees to help a friend by protecting the witness. Will knows Neal is trouble in several ways, but mostly for his heart. Still her uncle's latest ploy is not finished and if history holds, the calamity has just begun for Neal and Will.The third Uncle Sean vs. the Shandian Corporation tale closes the entertaining romantic suspense with a strong finale. SUN VALLEY ties up loose ends including that loose cannon Sean even though he hints at one more niece to lead a new novel. The lead couple is a delight as the heroic Will wants to protect Neal, but wonders who will protect him from her. Sub-genre fans will take pleasure from Gena Hale's concluding stand-alone story, but to understand the bigger picture will want to read the two exciting previous books, PARADISE ISLAND and DREAM MOUNTAIN.Harriet Klausner
Trustpilot
Copyright © 2022 Thriftbooks.com Terms of Use | Privacy Policy | Do Not Sell My Personal Information | Accessibility Statement
ThriftBooks® and the ThriftBooks® logo are registered trademarks of Thrift Books Global, LLC