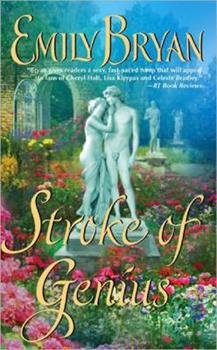 Crispin Hawke?s sculptures are revered by the ton. And tales of his fiery bed skills are whispered behind every fashionable fan. But can this artistic genius transform a gawky heiress into the most sought after original in London?without falling for her himself?

Published by Thriftbooks.com User , 12 years ago
Grace Makepeace arrives from Boston for her first London season. In order for her daughter to attend the Ton's top galas, Grace's mom asks renowned artist Crispin Hawke to sculptor her offspring's hands while Grace prefers other lessons from the rake. He already drew her, his scandalous style having "met" her in his dreams. Crispin is the prototype of the arrogant aristocrat while Grace is the brash Bostonian. However, his intellectual conceit means nothing to Grace who rips his skin for being so haughty. As they clash and argue, he sculpts and she writes her version of Pygmalian, they fall in love. However, each wonders why total opposites although strongly attracted to one another repel each other. This amusing historical romance is a classic gender war tale of the irresistible force meeting the immovable object; as the attracted opposites battle one another. Meanwhile their devoted servants Wyckham and Claudette also fall in love but their loyalty to their respective employers tested. Fans will enjoy the love between the Charles and the Thames as Grace proves Crispin the genius is a dope when it comes to love. Harriet Klausner
Trustpilot
Copyright © 2022 Thriftbooks.com Terms of Use | Privacy Policy | Do Not Sell My Personal Information | Accessibility Statement
ThriftBooks® and the ThriftBooks® logo are registered trademarks of Thrift Books Global, LLC