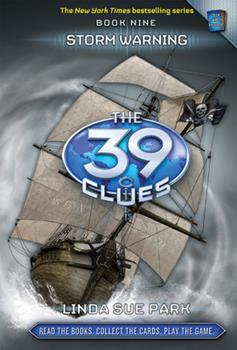 The end is near Book 9 of the #1 NY Times Bestselling series. The shadow of a man in black has followed fourteen-year-old Amy Cahill and her younger brother, Dan, on their worldwide search for 39 Clues that lead to a great power. Amy and Dan know the man in black has tried to kill them. They know he's a Madrigal, the most secretive and terrifying group hunting for the Clues. Amy and Dan have run hard and fast, but they can't escape the man following...

couldn't pot it down

Published by Lisa Watkins , 2 years ago
My son loved this book couldn't put it down

Published by Thriftbooks.com User , 11 years ago
When Grace Cahill passed away, relatives oozed out of the woodwork in hopes of getting their hands on her fortunes. But Grace wasn't your typical old lady, and she didn't leave this world in typical fashion either. Instead of a will and an inheritance, she left behind a quest involving 39 clues that lead to a vast wealth and the highest authority imaginable. Now, six teams of Cahill relatives are racing around the world, chasing after intricately placed clues left behind by other famous Cahills, including Ben Franklin and Mozart. Fourteen-year-old Amy and her 11-year-old brother, Dan, make up one of the teams. Orphaned and unwanted by everyone except their beloved (and now deceased) grandmother, the siblings don't have anything to lose and have decided to go for it. But unlike their opponents, they have no money, connections, or special training, not to mention the fact that they're just kids. This team has the odds seriously stacked against them. But they do have a very cool au pair (a sort of domestic servant) traveling with them, and, above all, a great deal of spunk, smarts and determination. The race is on, and there aren't any rules. Book nine begins with our heroes traveling to the Caribbean. They are following a lead they found in China: a small portrait of Anne Bonny. Anne Bonny disguised herself as a man in the 1700s to join Calico Jack's crew as a pirate. Amy and Dan believe the next step of the race will be in either Jamaica or the Bahamas, so they try out both places. On the way, they confront their au pair, Nellie, about her suspicious behaviors. And she finally confesses. She breaks down and reveals that she is not some random nanny hired by Aunt Beatrice. Despite her explanation, or maybe because of it, Amy and Dan refuse to trust her. And their instincts are right on, because Nellie isn't telling them everything. Then someone hands them a coded note. Getting quite good at deciphering messages by now, Amy and Dan follow the clue to an oceanside cave. They know they are in the right place by the Tomas clan symbol carved into the cave wall. Nellie waits outside while the siblings scour the cave for another clue. But while they search, the tide creeps in, closer and closer, until Amy and Dan barely have their heads above water. Once again, the clue hunt pushes them to the edge of death. And it won't be the last time. But Amy and Dan discover a lot more in the Caribbean than just the next clue. The man in black, a sinister shadow from the beginning, finally comes forward with his identity and sheds some important light on the mysterious Madrigal branch. This priceless, newfound information will take them further in the race than they ever thought possible. Linda Sue Park tackles the ninth 39 Clues book with style, creativity and cleverness. She offers a batch of new ingenious puzzles for the main characters (and readers) to decipher, and sticks our heroes in quite a few nail-biting adventures. Plus, she situates it all in the he

Published by Thriftbooks.com User , 11 years ago
My son loves this series and especially loves it when a new book comes out! He goes onto the 39 clues website and enters in the new clues and is kept busy. I will definitely be buying number 10 when it comes out.

Just gets better and better

Published by Thriftbooks.com User , 11 years ago
The 39 Clues just marches another step forward into classic status. The adventure now takes us into the Caribbean as the scene is set for the climax in Book 10. The mysterious 'Man in Black' is revealed and I can reveal...that it's not Johnny Cash! Definately recommended, I'd also recommend the brilliant 'Godstone' and also 'Mariah Mundi': Godstone - The Kairos Boxes Mariah Mundi and the Ghost Diamonds

Awesome Addition to wet your appetite for the Final Book

Published by Thriftbooks.com User , 11 years ago
Like the two previous reviewers I think Linda Sue Park has done a great job in fleshing out the characters in the book and getting the reader ready for the final book. The depth and breadth of the charaters in this book make it the best of the bunch so far. The maturing of Dan and Amy is very evident in this book and it makes it a pleasure to read.

Published by Thriftbooks.com User , 11 years ago
Wow, what a great read. This has it all. Some of the books shy away from the "solving clues" and don't add depth to characters, but in Storm Warning, Park does both, Amy and Dan solve clues, and one we get a lot of depth in the characters. It was a nice and refreshing touch. The trio (Nellie, Dan and Amy) head to to the Caribbean to follow up on clues. It has the usual danger that's surrounds the clues, but there's also danger from the other racers. As if that's not enough, Amy and Dan has to deal with the consequences of something they do, and the fallout it leads to. They do learn a lot about their past and what happened to their parents. All of this weighs down on them as they have to solve the puzzles. With all of this going on, they have to deal with someone they only know as "The Man in Black." I like the part about The Man in Black. He was introduced early on in the series, but we were never told who he really was. Well, in Storm Warning, we find out who he is and how he is involved with The 39 Clues. Another strength this book has is that we get a lot of Nellie. We find out who she really is and the part she plays in the lives of Amy and Dan. This part really adds a lot to the story. I was glad that Park took the time to develop Nellie It was a very nice touch. There's more to Nellie than meets the eye. I was also glad to see how Park handled the characters of Dan and Amy. Usually authors in this series makes Dan a whiny twerp who I can't stand. Not so in this case. Park did a fantastic job with Amy and Dan. Storm Warning has it all, great plots, fantastic plot twists, and wonderful characters. If you've read all the books in The 39 Clues up to now, you'll want to read this one. It's a keeper.
Trustpilot
Copyright © 2022 Thriftbooks.com Terms of Use | Privacy Policy | Do Not Sell My Personal Information | Accessibility Statement
ThriftBooks® and the ThriftBooks® logo are registered trademarks of Thrift Books Global, LLC