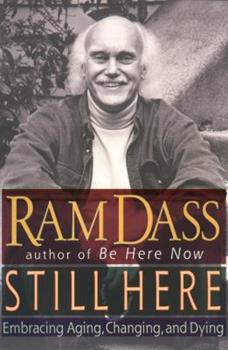 More than thirty years ago, an entire generation sought a new way of life, looking for fulfillment and meaning in a way no one had before. Leaving his teaching job at Harvard, Ram Dass embodied the... This description may be from another edition of this product.

Published by Thriftbooks.com User , 21 years ago
Indeed Ram Dass is still here in this moment after a crippling stroke to guide us toward an understanding of our place among our fellows in the world as we grow old. Once he was Richard Alpert, Harvard professor, and then, after turning on and dropping out in the sixties, became Ram Dass, author of the best-selling Be Here Now (1971), the axiom of the title from the ancients of the East thereby becoming a mantra for a generation of flower children.In this inspiring and eminently readable book, Ram Dass celebrates aging as a time of self-discovery and of selfless service to others. What could be more appropriate for a man who has lived so passionately, who has traveled so widely and learned so much than to share his experience and wisdom with others? And Ram Dass does it well, without sanctimonious posturing or self-serving claptrap, in a prose style that is familiar, warm and sharing, and at times brilliant. Especially beautiful are the passages on pages 141-144 in which he recalls his Jewish home and then a visit to India in 1970. Of course he does remind us of the many friends and note worthies he has met along the way; and, true, he is not adverse to indulging himself a little with reflections about how HE has been of service to the aged, the infirm, and the dying. But this is only right. There is, as we are freed from many of the constraints of society and its shallow proprieties, no place for a false modesty, and if one has done well, one should be pleased with oneself, and like Walt Whitman, celebrate oneself. As a young man, Ram Dass went against the shared "wisdom" of the society that had so well nurtured him and sought his own way, and he found it. He is to be admired and listened to.His way now is not that of renunciation, as one might expect from the Hindu influence on his life, but a more social orientation. He practices karma yoga, from the Bhagavad Gita in which one finds salvation and freedom through the non-attached performance of one's duties--one's dharma--without expectation, without seeking reward or the fruit of labor.Ram Dass believes he suffered the stroke through the "fierce grace" of his guru because of this continued "attachment to the Ego" (pp. 200-201). By learning a deeper level of suffering first hand he drew closer to God. As his guru once said, "See? That's the way it works. Suffering does bring you closer to God." He was unable to totally renounce the delusions of this world, the social and political fruits that he loved so much, being such an intensely social person, and so the attachment remained. Now confined to a wheelchair he spends more time "hanging out" with his guru (p. 202), the deceased Maharajji, whom he reveres as a god, which is the way of the guru-devotee relationship. His faith was tested by the stroke, but he came away with his faith intact. He writes in closing the book, "I know now that my faith is unshakeable. That assurance is the highest gift I have received from the strok

Make this book a gift to yourself

Published by Thriftbooks.com User , 22 years ago
I first met Ram Dass when he spoke at Drake University in Des Moines many years ago. Such wit, charm, humor-and light! Since then I have read most of his books and have several of his audiotapes in my car, too. He never fails to make me laugh at my own failings-and keep going in spite of them. He also has helped me achieve a greater understanding about other people's failings, too-and what I can learn from them. His basic spiritual philosophy does not change, of course; after all, it is centuries old. But in his various books, he applies that philosophy to different situations, thus deepening and enriching my understanding of it. Now he applies his practiced spirituality to aging and dying, putting a whole new spin on the basic premise of learning to let go. This is a winner. All of his books are. I don't know if I will be able to laugh at my own death, but Ram Dass-with his humor, humanity, and wisdom-is helping me step back and consider my life and eventual passing in a more peaceful light. Light being the operative word, of course.

Published by Thriftbooks.com User , 22 years ago
As Ram Dass so astutely observes, one of the benefits of aging is wisdom. A big part of that wisdom is coming to understand paradox. Perhaps the biggest paradox has to do with overcoming our fears. The secret, we learn, is not running from those fears, as so many people do, but turning around and confronting them. Better yet, embracing them. That's what Ram Dass advocates with the greatest fears of the western world -- aging, changing, and dying. Plato wrote about Socrates "practicing death." Michel de Montaigne, the 16th Century French philosopher, wrote: "To practice death is to practice freedom. A man who has learned how to die has unlearned how to be a slave. Knowing how to die gives us freedom from subjection and constraint." Carl Jung said that he was convinced that it is hygienic to discover in death a goal toward which one can strive. Ram Dass discusses the psychology and philosophy of embracing aging, change, and dying, or, to put it in other words, of "practicing death."Unfortunately, the average materialistic Westerner will not grasp the wisdom of Ram Dass. It is likely too advanced for the pure scientist or for the religious fundamentalist. In order to fully appreciate this book, one must have at least attempted to expand his or her consciousness to things outside the material world, beyond the ego. For the person on a truly spiritual path, Ram Dass provides the words to explain what that person has intuitively felt but has never been able to explain. The real paradox is that in learning how to practice death, we learn how to fully appreciate life and how to live it joyfully until it is time for transition.

Published by Thriftbooks.com User , 22 years ago
Ram Dass has done it again; he's focused into the moment and brought forth the intimacy and superb subtleness of his life's experience for fellow travelers to explore and ponder. The advance guide and Uncle, as he calls himself, has a profound ability to articulate and impart the spiritual wisdom brought on by the advance of the years. A cerebral stroke has made this all the more amazing, for Ram Dass brings us to the threshhold of Death where he confirms that the Light of the Immortal Soul shines forth. This is a message that will remain with you and lighten your heart in these times of trouble. With grace, good humor and an understanding heart, Ram Dass again shares his wisdom for the benefit of those who will but stop and reflect upon the silence within of which he speaks. "In My house, there are many mansions" There we are! I recommend this book for all who would know the truth from a fellow seeker.

Published by Thriftbooks.com User , 22 years ago
Ram Dass, a long time spiritual teacher of myself has written an extraordinary account of his learnings about aging. His work, influenced by Buddhist and Eastern teachings remind us all of the multiple planes of reality we exist upon, simultaneously. Easilly read, and written with authenticity and exceptional clarity, this work is destined to become a classic in a time when our Western world is so ready to dismiss our aging population. This book acknowledges the losses, pains, and out attachments to holding onto what was. It reminds us that our age is a concept we hold onto to identify ourselves on an earthly level, but on a spiritual level, we always are, have been, and will continue to be the same self that we always have been--that being the loving essence of our soulful self. Forget self pity. This book, while normalizing the experience and difficulties on a physical level, will remind you who you truly are. Highly recommended without reservation.
Trustpilot
Copyright © 2022 Thriftbooks.com Terms of Use | Privacy Policy | Do Not Sell My Personal Information | Cookie Preferences | Accessibility Statement
ThriftBooks® and the ThriftBooks® logo are registered trademarks of Thrift Books Global, LLC