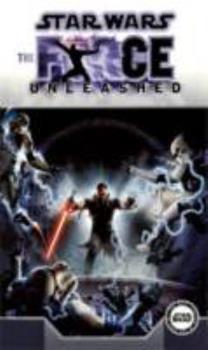 Revealed here are the origins of Darth Vader's secret apprentice, the deadly missions on which he was sent to track down and destroy Jedi, and the awesome decision he is forced to make that will, literally, change the way you look at the "Star Wars" saga Scripted by Haden Blackman, the author of LucasArts' game "The Force Unleashed," this graphic novel can be enjoyed alone, or as a companion to the amazing game. An original graphic novel based on...

A Great Story... The Game is Based On

Published by Thriftbooks.com User , 13 years ago
As Good as the game The Force Unleashed is, (I have the X-Box 360 Version) The Story Comes First. Now If you Play the game through it will reveal the story to you. If However You don't have the game, or just want to read the story I suggest this Graphic Novel. As well as the Del Rey Novel which goes into much deeper detail. The Graphic Novel is a Tremendous Story with Top notch Art. The only Conplaint is After Reading it, Some of the Key elements of the story just couldn't be fit into the Book. The Graphic Novel is Good for an easy read to understand the basic story and important Continuity Storyline Points. I won't spoil the story for People who want to learn first hand of the Story of "Vader's Secret Apprentace" I will tell you that George Lucas Oversaw the Entire Project from Start to finish and the Main story is Probably the most important story to come out of Lucasfilm In Years It Basically ties Episode III to Episode IV. Very Important Read. I Highly Suggest this book to all Star Wars Fans both Casual and Serious. it is Highly Recommended.

A different view from the Book version

Published by Thriftbooks.com User , 13 years ago
Having read BOTH the book and graphic novel I can say that the story line in the graphic novel is told from a different point of view and in a totally different way then from the book version. I would recommend reading the book version first then the graphic novel that way you can see what the graphic novel skipped over or shows a small part of it. (I would have liked to see the robotic versions of the jedi council that starkiller fights while fighting another jedi master in the book version). It does show you what Proxy looks like as well as the Bull Rancor. It also tells you WHY (in both the book and graphic novel) Starkiller went from being a sith lord trainee to a jedi trainee. For those above the age of 15, I would disregard the 3 and below star reviews since it seems that they were basing their reviews on the tv commercials, what they read in a gamer magazine or they was looking at the pictures and not reading the story. IF you want a full background story about "Force Unleashed" then read the book, but IF you want a quick story that hits the high points then get the graphic novel.

Not bad at all

Published by Thriftbooks.com User , 13 years ago
First, I must say that I'm a casual fan of SW. I read a couple of novels, comics, played some games so I don't know all the storylines, what is cannon and what is not, etc. I just love to read good stories set in different universes and I don't mind if it screws some "facts" established in others stories. That said, I must say that I liked it. It was not too predictable for a Star Wars story and it is refreshing to read something set in this time period. My only complaint is that it could have been longer. I would have cared more for the characters but I suppose that to read the novel and the game will add some meat to the bone. So, for a Graphic Novel, it does well what it is suppose to do and I recommend this product.

Published by Thriftbooks.com User , 13 years ago
A wonderfully surprising look into what happened after the birth of Darth Vader. An unleashed look into to power of the Force and how an individual can walk the fine line between the Light and Dark. The art work mirrors modern Dark Horse Star Wars comics which provides an incredible look into the power of the Force and the Star Wars Universe. A definate must read for any Star Wars Fan.
Copyright © 2020 Thriftbooks.com Terms of Use | Privacy Policy | Do Not Sell My Personal Information | Accessibility Statement
ThriftBooks® and the ThriftBooks® logo are registered trademarks of Thrift Books Global, LLC