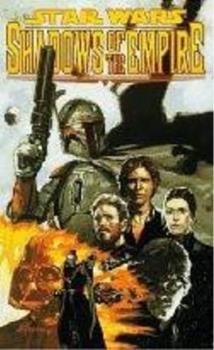 Shadows of the Empire

by John Wagner and John Nadeau

Darth Vader wants Luke Skywalker - alive. Prince Xizor, the largest trader This description may be from another edition of this product.

AMAZING! ONE OF THE SEU"S MOST SATISFYING PIECES

Published by Thriftbooks.com User , 14 years ago
I read this comic again after losing it and was very happy with it ! The comic truly feels like a starwars film itself with amazingly phemonal action a fantastic storyline and gorgueous art Shadows delivers the goods like no other one of the best starwars comics i've ever read in my life and a instant classic Shadows of the empire will blow you away and keep you gripped in until the last page 10/10 must -read for sure .

An excellent story of what happened between eppisod's 5 & 6

Published by Thriftbooks.com User , 25 years ago
The story is just truely awsome on what happened between luke leia chewie the droids and Lando Calerisan starting frome the begining till the end you just are amazed at what happenes between the 5 of them and there search for Captain Han Solo

Many will read this and not put it down until they're done!

Published by Thriftbooks.com User , 25 years ago
All right, Star Wars fans! You waited for the story of what REALLY happened between the Movies (Star Wars: The Empire Strikes Back, and Star Wars: Return of the Jedi) and now you got it! Wondering "How did Luke all of a sudden become a Jedi Knight in Return of the Jedi?"? Or maybe "When did the second Death Star start?"? Well, here it is! And if you liked the game... You'll LOVE the book! Han Solo is frozen in Carbonite... Luke Skywalker is becoming a Jedi... And the Empire has the alliance in their grasp! What will happen? The suspense is endless. The battles in this book go into so much detail, you'd swear you were actually there! Pick it up... YOU WON'T PUT IT DOWN! The best Star Wars book to date! Experience Shadows of the Empire!

Great for filling in the blanks of the movies

Published by Thriftbooks.com User , 25 years ago
I thought that this book gave you backgrounds on some of the unknown things in the movies. It also explained the new video gameswith the SHADOWS OF THE EMPIRE titles. It was a very well-writtenstory and I have recommended it to lots of other people. It had duels and even small wars in it and is one of the best of the STAR WARS series.

Published by Thriftbooks.com User , 25 years ago
I thought this was a wonderfully written book. I thought that the author did a great job of keeping the tone and the wording of the book in harmony with that of the other two books. I have read other books that are about Star Wars, and it didn't feel like the story flowed the way it should in the hands of these new authors. This couldn't be said for Steve Perry. If I hadn't seen his name at the beginning, I would have thought that George Lucas himself had written it. If you are a lover of the Star Wars movies or books then you should read this book. It answers a lot of questions you might have about some of the things that take place in Return of the Jedi
Trustpilot
Copyright © 2022 Thriftbooks.com Terms of Use | Privacy Policy | Do Not Sell My Personal Information | Cookie Preferences | Accessibility Statement
ThriftBooks® and the ThriftBooks® logo are registered trademarks of Thrift Books Global, LLC