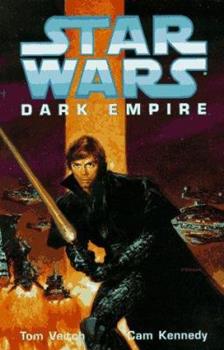 by Mark Zug and Tom Veitch

The epic-length story that re-energized the "Star Wars" franchise is now available in a new edition, with a new cover by "Magic the Gathering" artist Mark Zug Join Luke, Leia, Han, and Chewie as they... This description may be from another edition of this product.

Published by Thriftbooks.com User , 16 years ago
This comic series was definetly the best EU ive read. The plot and dialouge are excellent, as is the drawing. The only significant quip ive heard about the book is that it undermines vaders sacrifice, making it meaningless. Id have to disagree, beause had it been meaningless, than Luke wouldve died, and the Death Star wouldve destroyed Endor. Palpatine was dead, no question about that, and was killed by the Chosen One. It doesnt nullify Lucas's PT.

Published by Thriftbooks.com User , 18 years ago
It is a time of peril for the New Republic. Six years after the Battle of Endor, the destruction of the Empire's second Death Star, and the defeat of Emperor Palpatine and Darth Vader, the war for control of the galaxy still rages on.Despite their victory over the infamous Grand Admiral Thrawn a year before, the former Rebels have been forced to evacuate Coruscant after a successful invasion by resurgent Imperial forces. But when the Empire's "leaders" begin to fight over the right to govern, civil war breaks out and gives Luke Skywalker, Lando Calrissian and Alliance troops an opening to carry out a daring raid on Coruscant itself. But the mission goes awry and Skywalker and Calrissian crash-land their captured Star Destroyer at the heart of the Imperial City.But when Han Solo and his wife Leia, accompanied by Chewbacca and C-3PO, attempt to rescue Luke and Lando, they are taken aback by Luke's refusal to go with them back to the secret Alliance base known as Pinnacle. Instead, he allows himself to be whisked off by a dark side storm, leaving his twin sister and her husband to wonder if the burdens of being a Jedi Master are too heavy for Luke to bear alone.When this new chapter of the Star Wars Expanded Universe was first published as a six-issue comic book series by Dark Horse, I had mixed feelings. The concept was daring...Luke falls to the dark side of the Force (or does he?), the Emperor, thought to be dead at the end of Return of the Jedi, is back, thanks to the power of cloning technology...heck, even Boba Fett is revealed to having not being found "digestible" by the Sarlacc. All very fascinating, but wasn't Tom Veitch pushing things a bit too far? So even though I read my friend Geno's six issues from cover to cover, I thought, "Nawww....I'm not buying this. It doesn't fit into the Star Wars saga...."Ah. Silly me. When I read Kevin J. Anderson's Jedi Search, the first installment of the Jedi Academy Trilogy, I noticed certain references to the reconstruction of both Coruscant and Mon Calamari, which had been subjected to battle and siege in Dark Empire. There were also passing references to the reborn Emperor. Later, when I broke down and bought this one volume collection, I read the introduction by Anderson and realized that the changes Veitch made in the Star Wars storyline were just too big to ignore. Even though as a Star Wars fan I know the only "official" version is the six-Episode film saga as written, produced, and/or directed by George Lucas, I lightened up and came to accept Dark Empire and its two sequels as an integral -- and fun -- part of the Expanded Universe.The story by Veitch (once you get over the "how dare he?" reaction to it) is so well-written that you wish it had been a pure prose novel. The artwork by Cam Kennedy is innovative and at times almost impressionistic....as far as comics art is concerned I prefer the photo-realistic style of the prequel adaptations, but that doesn't take away from its beauty.

Published by Thriftbooks.com User , 19 years ago
For everybody's information (this is from published interviews with Veitch), when George Lucas asked Tom Veitch to write Star Wars: Dark Empire, Veitch said he thought the Empire would try to keep the fear of Darth Vader alive by putting somebody else inside the costume. Lucas told Veitch, "You can't use Vader, but you can bring back the Emperor if you can figure out how to do it." Veitch proposed that the Emperor had been cloning himself for some time, and Lucas said "great!" ...People need to understand that during the Star Wars revival of the early 1990s Lucas personally ok'd everything, including the plots of the comics. Veitch invented the two-bladed lightsaber (TPM) and the Jedi Holocron, among other things, and these were approved by Mr. Lucas. Cheers.

Hold the phone! Let's look at the facts here!

Published by Thriftbooks.com User , 20 years ago
Ok, this isn't a review of Dark Empire, but rather a counterpoint to the people who are blasting a very good peice of Star Wars expanded literature. Quite frankly, the Dark Empire trilogy is not the shipwreck that many people are making it out to be. Ok, the "Galaxy Gun" wasn't a very good name for a superweapon (cannon would have been better), but for the sake of Starwars fans everywhere, I'll just deal with the two biggest problems people seem to be having, the return of the Emperor and Luke's supposed switch to the Darkside. Considering you scrolled down this far, you already know the basic plot.Yes, Vader's killing of Palpatine was a great ending to Lucas' saga. But the idea in Dark Empire is Palpatine and his empire were an evil so great that no one person could destroy them. It took Vader and his children, Luke and Leia, to finally put an end to Palpatine reign. Eventhough Han, in typical fashion, blows away the emperor's last (weak and genetically unstable) clone in Empire's End, it was stated that by Palpatine's doctor that he would die forever very soon unless he found a jedi to posses after his defeat and loss of aceptable clones in Dark Empire and Dark Empire II. So technically, it was Luke and Leia who "defeated" Palpatine. Luke also does the impossible by defeating the Emperor himself in physical combat (Which I felt was lacking even in the movie trilogy), something no jedi had ever done, and destroyed Palpatines best clones (with a little help from a revolting warrior or two). All these grafical novels do is expand the confict with Palpatine from Vader, down to the next generation, Luke and Leia, which is quite appropreate if one is familer with the Star Wars universe. There is also a crystal clear explanation which is stated several times why Luke "turned" to the darkside. It was stated that Luke was trying to learn all of Palpatines dark secrets and then use them to destroy him and his empire once and for all. Come on! If Luke really turned to the darkside immediately why would he give the New Republic the codes to beat the invincible world devastators? Later on though, Luke does go too far into the darkside and Leia has to save him, like Luke did with Vader. Luke also did it to understand his father better, he needed to know why his father became Darth Vader. There's also a dozen pages in the back of Dark Empire which runs through the whole plot again! For crying out loud! Did these critics even read the book! Anyway, don't be put off by a few naysayers, the Dark Empire trilogy is better than bad, its great!
Copyright © 2022 Thriftbooks.com Terms of Use | Privacy Policy | Do Not Sell My Personal Information | Accessibility Statement
ThriftBooks® and the ThriftBooks® logo are registered trademarks of Thrift Books Global, LLC