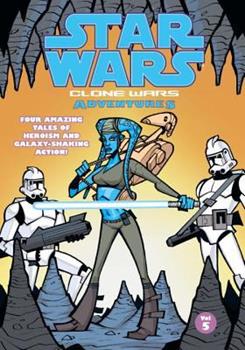 Strap in for another tour through the highly charged "Clone Wars Adventures" As the fires of the Clone Wars burn across the galaxy, heroes on both sides of the conflict emerge, and no matter what the outcome, the galaxy will be forever changed. Presenting four more pulse-racing tales of knock-down, drag-out action and adventure, all told in the same stripped-down stylization as Cartoon Network's micro-series. The "Clone Wars Adventures" series is...

Published by Thriftbooks.com User , 12 years ago
Arrived in excellent condition. My son loves it and can't put the books down.

love the books, hate the binding.

Published by Thriftbooks.com User , 13 years ago
I am giving these books 5 stars because the kids love them. It's not that they don't care about the pages falling out, they do, but once they accepted I would not be wasting tape on the books, it stopped bothering me. We find the pages and play the "which page is next" game which I'm guessing helps with reading comprehension. The pages are of good enough quality that when they do fall out they don't fall apart.

Published by Thriftbooks.com User , 13 years ago
What Goes Up... Jedi Aayla Secura and her troops are going to defend a ewok village on Endor from the Beast in the Mouth of the Mountain and she takes a battle droid with her, her recon squad gets killed by the monster and she murders the hideous beast. Bailed Out Bail Organa leads a rescue mission to the Separatists in Metalorn when Jedi Master Shaak Ti is captured and escape on the Tantive IIII. Heroes on Both Sides A Clone Commander leads his troops in the Vidaav colony and the natives there are trying to stop the catastrophe that is going to doom the planet. The clone commander is on a man to man fight with the native leader. A thriller! The Order of the Outcasts Padawan Joc Sah and his squad of Clone troopers are in Ragmar V to battle some unwanted ragged people who live there, This becomes an Order 66 tale of when his Master Sev is killed and he is alone and figurers out his former enemy is his friend and he must destroy his master's troops for

Published by Thriftbooks.com User , 15 years ago
Star Wars: Clone Wars Adventures is an ongoing series from Dark Horse comics that takes its inspiration from the extremely successful Clone Wars cartoon series. This inspiration is visible in both the short, action-packed nature of the stories as well as in the art style itself. Volume Five contains four new stories as follows: 1) "What Goes Up..." - Aayla Secura and the 327th Star Corps journey to the forest moon of Endor to investigate the disappearance of a Republic recon team. This is a great story, not least because it features Ewoks and also highlights a very amusing sarcastic battle droid. Each time I see Revenge of the Sith, I chuckle at the two lines the commander battle droid has on the bridge of the Invisible Hand when Grievous and the heroes meet. This droid captures that same attitude but takes it a lot further. Thumbs up for this tale! 2) "Bailed Out" - Another winner, this story follows a rescue mission to Metalorn led by Senator Bail Organa. The Separatists are holding a special prisoner and Organa must connive his way into the facility and attempt to help. I liked the notion of having a Senator support the war effort by directly using politics as a weapon. 3) "Heroes on Both Sides" - The Separatists abandon their allies on the Viidaav Mining Colony and trigger a weapon that will doom the whole planet. Unbeknownst to each other, a clone commander and a Viidaavian race to both try and stop the catastrophe. This story is told in an innovative mirror style where panels on facing pages show similar events from two distinct points of view. 4) Order of Outcasts" - Like Volume Four, this book ends with an Order 66 tale. Padawan Joc Sah is caught in the middle of the Jedi slaughter while trying to secure a Republic outpost on Ragmar V. Ragtag locals he initially thought of as the enemy suddenly become allies. This story shows the shift in thinking any Jedi surviving the carnage of Order 66 will be required to do in order to have any hope of staying alive under the Emperor's New Order. Clone Wars Adventures Volume Five was a standout in this series. All four stories were strong and the first two in particular are worth taking a look.
Copyright © 2020 Thriftbooks.com Terms of Use | Privacy Policy | Do Not Sell My Personal Information | Accessibility Statement
ThriftBooks® and the ThriftBooks® logo are registered trademarks of Thrift Books Global, LLC