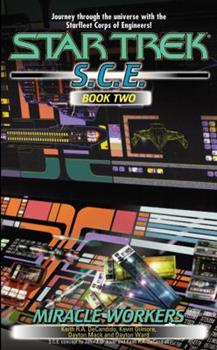 (Book #2 in the Starfleet Corps of Engineers Omnibus Series)

STARFLEET CORPS OF ENGINEERSTheir motto: Have tech, will travelNeed to build a subspace accelerator while under attack by a deadly local predator? Need to rescue a starship from interphase without getting trapped there yourself? Call in the Starfleet Corps of Engineers team, specifically the crack team from theU.S.S. da Vinci.Under the guidance of Captain David Gold and his first officer, formerStarship Enterprise engineer Commander Sonya Gomez, the...

Published by Thriftbooks.com User , 13 years ago
The second compilation of the Star Trek: S.C.E. (Starfleet Corps of Engineers) e-books, called Miracle Workers, collects books 5-8 of the continuing series, and they continue the stellar work that Keith R.A. DeCandido has done editing the series as well as great work from the authors. While I read mine in an e-book version, this is also available in paperback. As the series begins to move forward, we find out even more about some of characters, as well as getting some exciting action as well. In fact, Miracle Workers demonstrates even further that you can get a bunch of Starfleet engineers together and tell interesting stories with them without all of the technobabble Trek is known for. Sure, there's always going to be some, but no more so than any other Trek book. Instead, we have stories such as First Officer Sonya Gomez going through a huge trial by fire that will change her life, or a straight adventure story about salvaging a space station while dealing with a scavenger race that will gladly kill anybody who gets in their way. The writing is excellent, and the stories are only getting better and better. Let's hope that continues to be the case as I move on to the next compilation. Yes, there are a couple of weaknesses ("Cold Fusion" has a couple of problems as well as being very straightforward compared to the books around it, for example), but overall this is a strong compilation. The writing is uniformly excellent (of course, it's full of some Trek staples, though this was actually David Mack's first prose fiction) and the characters are a lot of fun to read about. Don't let the "engineer" part fool you; this series is about the characters, and they're well-done characters too. Give it a try. David Roy

Published by Thriftbooks.com User , 19 years ago
I can't say much in this review of Book 2 of the Starfleet Corps of Engineers that I didn't already say in my review of Book 1. That is, it's great! Well-written, believable, and very entertaining, with nods to continuity throughout. If you're not reading these, or the DS9 re-launch, then you're missing out on some great stuff.An added bonus in the back of this publication is the S.C.E. Minipedia, written by one of the good ones, Keith R.A. DeCandido. Set up like the Star Trek Encyclopedia, it contains all you'll need to know and more about the persons, places, and things in the S.C.E. universe, which includes, of course, plenty of the canon stuff we've come to know and love. And for those of you who favor nitpicking, there's an e-mail address where you are invited to send in errors, corrections, or comments if you wish.Win-win, if you ask me.

Published by Thriftbooks.com User , 19 years ago
To all who read Star Trek, you will find that the second SCE book to be well written and an excellent read. Starfleet Corps of Engineers journey through adventures that include rescuing a ship trapped in interphase, help Deep Space Nine get a new power core, and put together a subspace accelerator.We have a collecton of short compact stories that being the Corps together in time pressed situations and get results. Perils and alien interference along with mystery and uncertainty all are part of the mix when dealing with the galaxy's wonders.Miracle Workers in their own right the Corps solves the problems in each of the short stories. First off there is the continuation of the story left off in book #1. Interphase by Dayton Ward and Kevin Dilmore.Interphase is about extracting the U.S.S. Defiant fron an interspatial rift. The unusual tenuous connection that the rift created betweeen the two universes causes problems, but the Tholians are a bigger problem. The adventure is well written and this conclusion was worth the wait. A good well written story and the characters are fleshed out here.Cold Fusion by Keith R.A. DeCandido is the Corps next adventure.Lt. Nog is in this one but Sonya Gomez is not, we will find out why in the third short story Invincible. DS-9 needs a new power core so, the Corps is sent to an abandoned Cardassian station in the Trivas system known as Empok Nor. When they arrive they run into an alien race of technology thieves. The adventure is well written and the character Lt. Commander Duffy leads the away team to the station. Duffy's character gets fleshed out in the story as the XO is not on this mission. Well written and the alien Androssi are introduced in this story.Invincible is the third story, by David Mack and Keith D.A. DeCardido is a story wriiten in personal logs, first officer's logs, letters to home and family etc. This is an evolving story as the logs continue. Sonya Gomez is sent to a far remote region of space to help out in a engineering project on the planet Sarindar. Captain Scott had read a paper that Gomez wrote about subspace accelerators and recommended her for the job. Sarindar's completely scan and transporter proof due to the very high ore concentration of Chimerium.Silicon based life forms exist on the planet of crystalline snowball appearance. Now the story is told and you will want to see how this story plays out.There is a "Minipedia" in this book to help in explaining the characters and places etc.In enjoyed these Trek adventures as I hope you will. Very well witten and each story in this series builds upon the last adventure told so you have a sense of continuation.

As enjoyable and even more satisfying than the first

Published by Thriftbooks.com User , 19 years ago
"Miracle Workers" was as enjoyable as "Have Tech, Will Travel". The conclusion to the Interphase story was worth the wait. The Cold Fusion story is set between DS9's Avatar and Abyss and filled in some plot points. Overall well worth reading.
Copyright © 2020 Thriftbooks.com Terms of Use | Privacy Policy | Do Not Sell My Personal Information | Accessibility Statement
ThriftBooks® and the ThriftBooks® logo are registered trademarks of Thrift Books Global, LLC