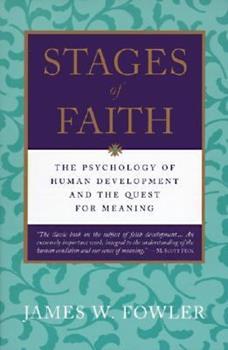 Stages of Faith: The Psychology of Human Development

Dr. James Fowler has asked these questions, and others like them, of nearly six hundred people. He has talked with men, women, and children of all ages, from four to eighty-eight, including Jews, Catholics, Protestants, agnostics, and atheists. In many cases, the interviews became in-depth conversations that provided rare, intimate glimpses into the various ways our lives have meaning and purpose, windows into what this books calls faith. Faith, as...

Published by Thriftbooks.com User , 16 years ago
Have you ever wondered why some people take religious texts literally and others understand them as metaphoric? Ever wondered why some believe that their religion is "the only one" while others view all religions as streams leading to the same ocean? Ever wondered why everyone seems to start life seeing things in black and white, and while most continue to do so, some people begin seeing in gray or even colors? Why every tradition starts with a list of concrete laws, and then eventually someone comes along and sums them up with one or two -- if his or her listeners will only pay attention? And why some members of the tradition feel more comfortable with the dozens or hundreds while others let them go and embrace the one or two? Fowler deals in depth with the six stages of faith, moving from the "Mythic-Literal" that we all begin with, explaining why some of us never outgrow it and each successive stage. He then discusses the processes one must move through, which he calls "crises of faith," in order to move from one stage to the next. He also explains why those in a low level of faith not only cannot understand those at a higher level, but are usually either distrustful, afraid or worshipful (or possibly all three at once) of them, and often pressure them to move back to the lower stage so they will feel more comfortable around them. This book is helpful to anyone undergoing a crisis of faith or to anyone who is confident in her own faith but is being pressured by old friends or family members to return to a previous religious background.

Published by Thriftbooks.com User , 18 years ago
I believe that this work and his later "Becoming Adult, Becoming Christian" constitute some of the most important and potentially culture changing works of our time. Some day these works by Fowler will be embraced by more of the church and will aid its effort to help people make progress along their own spiritual journeys. As I read this book and reflected upon my own life, I sensed a deep resonance with most of the stages of faith that Fowler outlined. The truth of the book was confirmed in remembering my own development. Once this resonance occurs for someone, the greater value of the book will be in discovering what higher levels of faith may lay ahead. At this point the book can serve as an invaluable guide to spiritual growth.I believe that the real answer to the world's most difficult conflicts is the growing interest in and effort to grow spiritually. When a person grows from egocentric, to ethnocentric, and then eventually to worldcentric awareness and beyond, rather than being a source of dissonance and human confrontation, they become a source of Unconditional Love and Harmony. Fowler's works aid those whose ego-shells have been cracked enough to let in a little light and will help them move toward a greater peace and harmony.

Published by Thriftbooks.com User , 22 years ago
Wouldn't we all love to know how we stack up as lovers, as parents, as 'faithers'? James Fowler offers a framework to help us understand normative faith. I read this book first in 1991, and return to it often. For all those who care deeply about their faith and the faith of others, this will be a meaningful book.

Ever wonder "Why" people are the way they are?

Published by Thriftbooks.com User , 24 years ago
This book consolidates aspects of social, cognitive and developmental psychology as it pertains to human growth. One of the most perplexing aspects of growing up and living in the world with others is attempting to understand ones self and WHY people are the way they are. Clear and concise examples are sited for the stages of growth/belief. The WHYS and WHY NOTS of human behavior and BELIEF are illuminated. The research of Piaget, Kohlberg and Erickson are reviewed through simple cross-referenced tables which help to build a cohesive view of mental/psycho/social growth.One of the finest treatments ever written of why people are the way they are.
Trustpilot
Copyright © 2022 Thriftbooks.com Terms of Use | Privacy Policy | Do Not Sell My Personal Information | Cookie Preferences | Accessibility Statement
ThriftBooks® and the ThriftBooks® logo are registered trademarks of Thrift Books Global, LLC