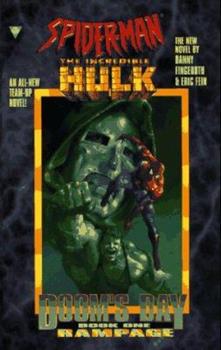 by Eric Fein and Danny Fingeroth

Kidnapped by a renegade secret agent, Bruce Banner is horrified when his captor uses him to create an army of Hulk clones, and Spider-Man must keep a friend from being transformed. This description may be from another edition of this product.

Published by Marko Comet , 10 months ago
Rampage: Doom's day book one. In my experience, books based on super hero licenses aren't that great. Sure they can have an interesting premise on the back cover, but once actually read they rarely provide exactly what is promised. The same can mostly be said of this book. The premise is very exciting and no one can deny that the concept of Spider-man and the hulk teaming up is a good one. The execution, however, is lack luster for the most part. Pros Hulks fighting Hulks (always a plus in my book) The villains behind the plot are interesting and show a rare incite to how they think and the back-stabbing environment they spend their days in. The hulk and Black Cat really steal the show in terms of stakes and emotional impact. Cons The set up seems to take too long and is not a good attention grabber. Spider-man really doesn't do much to help the plot. He's just kind of there. The relevant action happens late into the book and is mostly underwhelming. (The biggest detractor) Overall there really isn't much to be said about rampage. Since nothing can really change Spider-man, the Hulk or any other pre-established characters, there's no development in any meaningful way. In the end Rampage is an inoffensive book with a few interesting scenes here and there, but should really only be read if you're a huge fan of Spider-man or the Hulk and have almost nothing else to read about them. I bought this book on amazon for about $3.00, so I guess for that little money its worth a read if you're really bored

Published by Thriftbooks.com User , 19 years ago
Written at a High School level, this is a quite literate and well developed treatment of The Hulk, Spiderman, and The Black Cat in novel form. It has all the action and story value of the comics. For newcomers, there's enough exposition to introduce the characters, done briefly enough not to annoy old-timers well acquainted with the Marvel Universe. There's reasonable complexity here. Neither the heroes nor the bad guys are completely working together since each has his or her own agenda. Added to that is the S.A.F.E. agent working under cover representing government but not necessarily in the best interests of the heroes. And so there are easily enough complications to keep a mature reader interested.This isn't a bad book at all for those who want to get better acquainted with the not altogether jolly green giant before they see the movie. Just bear in mind that the Hulk's creators made him a reasonable 7 footer as opposed to the 12 foot creature in the movie. Note also that the character has developed in several ways over the years and so you might find his characterization in this book somewhat different than the movie characterization. Worth reading, even if you're way past High School age.

Published by Thriftbooks.com User , 22 years ago
This book is great. It is a great beginin for a great trilogy. Though this book takes place in present time, some events go as far back as when doom tried to steal surfer's power. If you thought that the hulk we bad news, then try to imagiane fourteen hulks on the ramapge and one of them being Flash Thompson spidy's close friend and being controld by a mad man. I recomnd this series as a must buy.

much better than it should've been!

Published by Thriftbooks.com User , 23 years ago
I've never liked Fingeroth or Fein as writers, so I almost didn't buy this book, but I was pleasantly surprised. And I love SAFE, who have been in a lot of the Marvel novels. The idea of Hulk clones is kind of goofy, but they made it work here.

Published by Thriftbooks.com User , 24 years ago
In the tradition of those comic book writers who can make a successful jump to novel writing (They include Peter David and David Michelinie) Danny Fingeroth and Eric Fein made such a move in this, the first book of the "Doom's Day" trilogy. The story is very balanced out. With half the action centering on Peter Parker and the other half on Dr. Bruce Banner. Flash Thomson and the Black Cat played important roles in the story and we get to see the new head of a goverment agency make his debut here in the form of Col. Sean Morgan and his team at SAFE. Danny and Eric woked as both writers and editors of Spider-Man for a good many years at Marvel and here they get a change to work with him one more time. It was a delightful story.

A Great Book to Start off a Great Trilogy!

Published by Thriftbooks.com User , 25 years ago
This is a great start of a series. A whole bunch of Hulks running around and Flash Thompson is one of them! Ofcourse the real Hulk is there as well. Doctor Doom was in this one alot more than book 2. Go read it.
Trustpilot
Copyright © 2022 Thriftbooks.com Terms of Use | Privacy Policy | Do Not Sell or Share My Personal Information | Accessibility Statement
ThriftBooks® and the ThriftBooks® logo are registered trademarks of Thrift Books Global, LLC