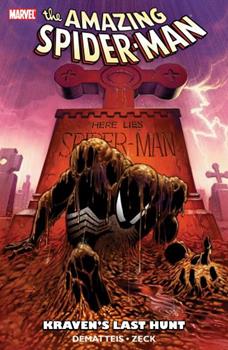 Kraven the Hunter has stalked and killed every animal known to man. But there is one beast that has eluded him - the wall-crawling web-slinger known as Spider-Man. And to prove that he is the hero's... This description may be from another edition of this product.

Published by Thriftbooks.com User , 17 years ago
"Kraven's Last Hunt" is a true masterpiece of the comic book medium, and it still stands as the best Spider-Man related graphic novel to date. This story alone should be proof enough that J.M. DeMatteis was the best author to ever be put on the Spider-Books, and the artwork by Mike Zeck complements the writing wonderfully. This a book that must be read by all those interested or seeking an interest in comics, and of course all those interested in the greatest superhero of them all, the amazing Spider-Man. The mysterious yet exhilerating gloom of "Kraven's Last Hunt" makes for one hell of an entertaining read, supported by spotless characterization and an incredible insight into the minds of Peter, Mary Jane, Vermin, and of course, Sergei Kravenoff, the man known as Kraven The Hunter. There's no question about it, this one's a must own.

Published by Thriftbooks.com User , 17 years ago
I read this story when it first came out as a cross-over storyline spanning all the Spider-man titles at the time. I was hooked! I eagerly awaited the next instalment till it came. This brings the story together (four or five issues worth) in one book. It's hard to tell for whom to root for. The knee-jerk reaction, of course, would be Spidey. But yet, Kraven The Hunter, for a villian had both honor and integrity. You gotta respect that!! The story is told from both Spidey and Kraven's point of view.It shows what's on the mind of Kraven. And that is COMPLETELY defeating Spider-man. Without spoiling the ending, the reader is left asking themselves "Who REALLY won??"

Spider-Man at his darkest and his best...

Published by Thriftbooks.com User , 17 years ago
I have so much I want to say about "Kraven's Last Hunt". What an amazing book. Worthy of being compared to "The Dark Knight Returns" graphic novel. Spider-Man has always been a fun character. He jokes and plays around frequently while fighting and defeating his many villans. Kraven is different. Each loss was shocking and disturbing and heartfelt for him. As each loss accumulated, his mind reeled and fought taking him to the point of obsession and madness. Kraven literally lost his mind. A proud man of honor and integrity who is continually humbled and humiliated by Spider-Man. He can't even accept the fact that Spider-Man is actually a man but some mystical unbeatable being who he calls "the spider". "No MAN could of done what you have done to Kraven", he says during one of his drug induced ritiuals. We are taken into Kraven's disturbing world. Allowed to look into his disturbed soul and in a strange but sad way, you can sympathize with him. Even understand why he does all he does to include his very final desperate act. Read the story from cover to cover and then read it a second time. Only, this time, read it through the mind of Kraven. Read only his captions. His thoughts alone is a remarkable story. Everyone I have suggested this to have all agreed. Kraven was never this intricate a character in previous Spider-Man stories. I absolutely love it and I will miss him. Kraven was more than just a super villan hellbent on destruction. He was a man of pride and honor who lived and died as such.

Published by Thriftbooks.com User , 21 years ago
Reading this book when I was 13 left a big impression on me. I had always heard how great it was, and when I finally read it, it became one of the first "serious" superhero books I had ever seen. To really nail this point there's an article at the back of the book saying how "serious" a book this really is and how superheros can be a "serious" medium. I don't know if superheros can be a serious artform, but this book is worth reading. The whole thing, from the cover to the art to the story has a erie feel to it. Today many superhero books are very dark and gritty, but this is Spider-man after all, and it's not typical to see him in this kind of book. Maybe kids today won't find anything unusual about it, but if you are used to the normal happy go lucky Spider-man, this might be of interest. Some of the dialogue might hook you or it might just bug you. It can get pretty weird somtimes. The plot is interesting enough, and might be a real treat if you don't already know details. Now the art by Mike Zeck (and Bob McLeod?) is gorgeous. This was back when mainstream comic artists could still draw. Very lush figures, real faces, look at the lady cop who gets a little to close to Vermin, I used to stare at that frame because her expression is so real! Spider-man is in his black costume which is also great for visuals. For me the art really made the book. This is not a typical Spider-man story, and it is certainly worth reading.

Published by Thriftbooks.com User , 22 years ago
This series features the original characters, the original team, in all-new adventures drawn and told in a manner reminiscent of the Silver Age era but incorporating some of the more sophisticated storytelling techniques adopted since then. Perfect for older nostalgists without interfering the current timeline. Plus, it's a good read that current X-fans curious about the X-Men's earlier days can enjoy too.
Trustpilot
Copyright © 2022 Thriftbooks.com Terms of Use | Privacy Policy | Do Not Sell or Share My Personal Information | Accessibility Statement
ThriftBooks® and the ThriftBooks® logo are registered trademarks of Thrift Books Global, LLC