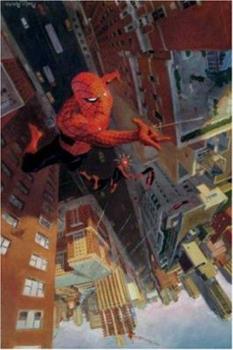 Here There Be Monsters

by Paul Jenkins and Damion Scott

He's struggled for years to control the coiled reptile that dwells deep within his heart. But now, at the end of his rope, one bad day will change Dr. Curt Connors' life forever -- and the Lizard will... This description may be from another edition of this product.

Spider-Man takes on the Lizard, plus: a very special issue

Published by Thriftbooks.com User , 17 years ago
"Spectacular Spider-Man, Volume 3: Here There Be Monsters" collects issues #11-14 of "The Spectacular Spider-Man." The tradepaperback contains the three-part story "The Lizard's Tale" and a poignant change of pace story that features painted art by Paolo Rivera (His cover for "The Spectacular Spider-Man" #14 serves as the cover for this collection). Paul Jenkins is the writer on all four stories, while the first three feature a new artistic team for the comic book with penciler Damion Scott and Inker Rob Campanella. In "The Lizard's Tale," Curt Connors, Peter Parker's friend, is a widower trying to deal with the loss of his wife and struggling to have a relationship with his young son while working desperately to get a research grant from the Montalbetti Foundation. However, when the grant is awarded to another scientist an enraged Connors once again turns into the Lizard. Spider-Man is able to stop his rampage, but not before the Lizard has destroyed his competitor's research lab. The Lizard turns back into Connors, who insists the destruction is not his fault. Peter puts Connors in a safe room with some sedatives to help him stay calm while he tries to figure out what is going on. But when Spider-Man returns, he finds Connors in the middle of what appears to be a deliberate transformation. "The Lizard's Tale" explores the tragic character of Curt Connors, who apparently has even more bad luck than Peter Parker. Connors is working on a cure for cancer, but loose the grant to somebody trying to cure foot fungus. The problem is that Connors is considered a loose cannon, and his actions before the Foundation's board only confirm that line of thinking. What makes this story distinctive is that in the end it is Connors and not Spider-Man who finds a way to solve the problem of the Lizard. "The Spectacular Spider-Man" #14 begins with eight New Yorkers, including J. Jonah Jameson and Aunt May, sharing their diverse thoughts about Spider-Man. Then we are introduced to Joey Beal, a young man who is crippled by cerebral palsy. Most days he sits in his wheelchair on the roof of his apartment building, enable to talk, but perfectly able to look at the world around him, especially when Spider-Man flies by on his webs. But now that it something going on in the abandoned apartment building across the street involving a Spider-Man villain who only comes out at night and Joey ends up in the middle. There is a nice moment at the end of this one, when Spider-Man talks to Joey before going off into the night for his next fight and leaves the young man with a better understanding of what it is like to be Spider-Man than almost everybody else. We all know that when it comes to Spider-Man the key dictum is that "with great power comes great responsibility," but in this story we get the caveat that so much responsibility is not fair. At the heart of Spider-Man has the idea that he is misunderstood and that his efforts are unappreciated. The bottom
Trustpilot
Copyright © 2022 Thriftbooks.com Terms of Use | Privacy Policy | Do Not Sell or Share My Personal Information | Accessibility Statement
ThriftBooks® and the ThriftBooks® logo are registered trademarks of Thrift Books Global, LLC