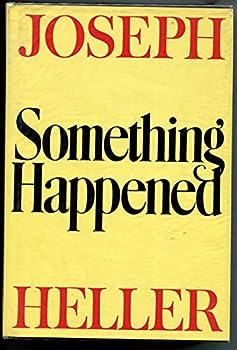 Bob Slocum was living the American dream. He had a beautiful wife, three lovely children, a nice house...and all the mistresses he desired. He had it all -- all, that is, but happiness. Slocum was discontent. Inevitably, inexorably, his discontent deteriorated into desolation until...something happened. Something Happened is Joseph Heller's wonderfully inventive and controversial second novel satirizing business life and American culture. The story...

Published by Thriftbooks.com User , 20 years ago
The title of this book by Joseph Heller is "Something Happened." Another title could have been "Life: The Book." This is one of the very, very few books I know that accurately and realistically portrays real life - life as it actually is - warts and all. The book I read immediately before this one was James Joyce's much-touted masterwork, Ulysses. Now, that book can, and has been, described the same way by many, and it is, in many ways, the very last word on realism. That said, it has much in common with this book, and Something Happened is, in many ways, the better book. Classicists and romanticists may well prefer Joyce's novel and consider it downright blasphemy to have it compared with this modern masterwork, but the fact is, this is a very good and much underrated book, and will probably be preferred by post-modernists and existentialists over Ulysses. The book is very long - nearly 600 pages - and does have a tendency to ramble at times - often seemingly without a point. It's written in the style of a first-person narrative, and this is one of the few books where you truly get into the head of the main character. That is the main difference between this book and Ulysses: unlike the latter work, which follows the adventures of three separate characters as they follow parallel courses and sometimes intertwine, Something Happened consists entirely of one character's thoughts and actions. And, since it deals only with other people insofar as they relate to him, it can get a bit solipsistic at times - however, that said, Heller's intention with this book (I think) was to accurately and realistically describe the thoughts in the head of a fairly normal, everyday American male. He does a rather remarkable job of this. The only real criticism of the book I can make is that it does tend to repeat itself quite a lot at times: certain situations are mentioned again and again with little or no variation, often seemingly for no reason - but, as anyone knows, this is, indeed, how most people's minds do work. The main character, Bob Slocum, is not a perfect person - but he is a REAL person. This is not another cardboard cutout character that we see all too many of: this is a real living, breathing flesh and blood character, warts and all - HUMAN, just like us. Many of the situations he finds himself in - both in the workplace and domestically - as well as the thoughts and emotions he finds himself experiencing, will no doubt hit home with a great many readers. Although Heller more than likely constructed Slocum to portray a certain generation of people - the anguished, confused veterans of the war - he is applicable to the Average Joe: he's the true Everyman. Heller seeks, in this book, to answer the real question: What, just what, DID happen, to that great, blinding glow of post-war euphoria? Or, as Roger Waters put it, "Whatever happened to the post-war dream?" Where's the American Dream? Where's all the sun and rainbows? WHAT HAPPENED? Something did.I

Published by Thriftbooks.com User , 20 years ago
Many of us, I'm sure, at one point or another in time have lived a life very similar to that of Heller's main character, Bob Slocum. I also have a daughter and a son close to the ages of the characters within, and have found it astounding the way he'd sometimes hit the nail on the head with resemblance in many of the conversations between father and offspring, spouse as well. The irony and comparability to my marriage, and life in general, was both hysterical and intense. I have a disabled son too, and know quite well the difficulties and complications that can and will arise, and the stress that it can place on a marriage as well. Heller did a good job at describing that (although I must credit myself with being a bit stronger about it than Bob Slocum ... to a point). There were differences as well, traits of Slocum that I didn't exactly care for, or couldn't seem to relate to; for he was in no way a perfect human being, but neither am I, nor are most of us. Though he did seem to be a bit of a bigot, a hypocrite, a womanizer and a male chauvinist, and somewhat vain and self-centered as well, these were mere flaws in the personality of a man who was basically fairly decent and normal. As different as we all may be, we all have our individual and personal flaws. Good people do have a tendency to struggle through life a lot, blindlessly at times ... constantly trying to figure it out by asking questions such as: "Why?" This was a personable, brave, and heartfelt story from Heller, of one man's bout with fatherhood and modern life and its trials and tribulations. Though a tad depressing at times, there isn't much that can be done about that, so is life ... it's not always easy. I've read 'Something Happened' a couple of times and enjoyed it immensely both reads, though years between each. I may even read it again someday.

most underrated book I've ever read

Published by Thriftbooks.com User , 20 years ago
Most of us know about Heller cause of Catch-22, but this novel should be ranked up there with his most famous classic. 'Something Happened' takes a look at the ordinary day life of a succesful, middle aged, business man who is obsiously growing more and more unhappy. It's a fairly common theme in a lot of modern art, but Heller adds his own touch by giving characters strange traits, which sometimes seem trivial -like someone's last name or their physical stature- and always turn out to add a unique twist to the plot. Along the way, Heller never fails us psychological insights into Bob Slocumb, the main character, and his relationships with his co-workers and family. I would bet anything that this book inspired some recently popular movies, such as Fight Club and American Beauty -as all have strong themes of irony, comedy, and tregedy. What still sets this book apart, is Heller's uncanny capacity to twist logic and words to make ordinary life seem so bizarre and surreal. It is definitely not self-help friendly, and it will make you look closer at yourself and others around you than might have been used to. As Heller seems to imply, such introspection will most likely show you something you's rather not consider, and its up to you to address it and not ignore it.

Underrated and Probably Underread, But Great!

Published by Thriftbooks.com User , 24 years ago
Quite simply, Joseph Heller's "Something Happened" is one of the great novels of the twentieth century. The narrative style is more consistant with a story being told in person than reading a novel. When I first encountered this work as a younger man, I was impressed that fiction writing could be so powerful and yet so realistic. Years of exposure to the corporate world described have made me realize that the book is even more profound than on first reading. It is the deconstructing of the American Dream, and the casualties are each of us in his own way.I was dismayed to read one reviewer write that nothing happens in "Something Happens." If one's criteria are shoot-outs and car chases, I suppose that this is true. What happens is internal, very personal, and unique to each of us. The protagonist confronts not only his own mortality, but that of an entire system. In contrast to the characters in Catch-22, who wear their absurdity on their sleeves, the characters in this book were harder to portray accurately. That Heller does this without missing a single note is a tribute to his craft. I wish that this work had been included in the Modern Library's 100 Best. It is richly deserving of that accolade. Read it and you will not be the same.
Trustpilot
Copyright © 2022 Thriftbooks.com Terms of Use | Privacy Policy | Do Not Sell My Personal Information | Cookie Preferences | Accessibility Statement
ThriftBooks® and the ThriftBooks® logo are registered trademarks of Thrift Books Global, LLC