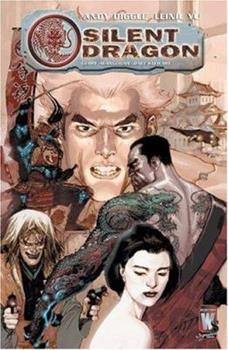 Collecting the beautifully illustrated 6-issue miniseries! In Tokyo, A.D.2063, Renjiro is caught between a lifetime of loyalty to his Yakuza clan and theiron-fisted might of the military elite, and he will soon learn that the onlyway to avoid total annihilation is to play both sides against the middle.

Three and half stars or four if you like Gibson

Published by Thriftbooks.com User , 12 years ago
This is a rare example of well written story and great art. Leinil Yu was born to draw cyber tech and stuff like robots, cyborgs and so on. Story reminds me of your typical Japanese samurai movie or John Woo triad action film, but it is well written. If you are tired of superheroes or wanna read good cyberpunk comic that CAN BE MADE INTO A GREAT MOVIE, get this.

Published by Thriftbooks.com User , 13 years ago
What will society look like in the years to come? Twilight Zone explored this theme often, but according to this futuristic samurai warrior tale, it will be a world of technological enhancements, cybernetic augmentation, self autonomous weapons (wittily referred to as think tanks), and droid armies to name a few; a world part 1984, part Terminator. It is Japan in the year 2063, where a totalitarian regime is in the midst of a civil war battling against organized crime clans such as the Yakuza. Both sides will resort to anything, with many advanced high-tech options available, when a mysterious new player appears to tip the scales, a cyb-aug character who is more droid than human. What is his angle, and more importantly the motivations of whatever or whoever the bewildering holographic image is that created and controls him? Throw in a young female wannabe "wisegal" for a bit of comic relief and humanization as contrast and balance to our robotic protagonist, and Andy Diggle's cautionary tale of honor and betrayal is a pure joy to behold. Add Leinil Yu's solid artwork and the final result is five stars across the board, an excellent example of the heights that a graphic novel can attain, and one to recommend to non-fans of the genre. If only they were all this good.

Published by Thriftbooks.com User , 14 years ago
This is not the greatest miniseries to come out, but it's solid. The art and story are both well done. It's a Sci-Fi samurai story line for the most part. It's entertaining. I personally really enjoyed the action and the art beautifully renders it. I would recommend this to anyone who enjoys Asian culture as well as futuristic weapon battles.
Copyright © 2020 Thriftbooks.com Terms of Use | Privacy Policy | Do Not Sell My Personal Information | Accessibility Statement
ThriftBooks® and the ThriftBooks® logo are registered trademarks of Thrift Books Global, LLC