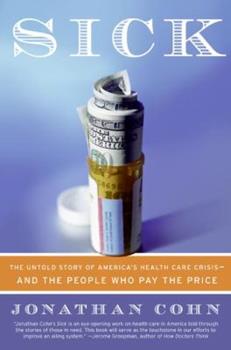 Sick: The Untold Story of America's Health Care Crisis--And the People Who Pay the Price

America's health care system is unraveling, with millions of hard-working people unable to pay for prescription drugs and regular checkups, let alone hospital visits. Jonathan Cohn traveled across the United States--the only country in the developed world that does not guarantee its citizens access to medical care--to investigate why this crisis is happening and to see firsthand its impact on ordinary Americans. Passionate, powerful, illuminating,...

Published by Thriftbooks.com User , 15 years ago
This book just begins to describe the issues with our health care system. The for-profits skim the lucrative services from the "not-for-profits", leaving us all with the tab. We are all subsidizing the for profit entities and paying their dividends. Do people really think the US Government does not control the US healthcare system now? Medicare and Medicaid represent over half of hospital and physician payments and everything else is heavily regulated by the US government now! We have a government run and controlled system now and it is operating poorly!

Published by Thriftbooks.com User , 15 years ago
SICK by Jonathan Cohn is, thankfully, one of many books coming out these days about problems with our health care system in the United States. The style of the book is brilliant, since in the first eight chapters Cohn carefully examines various aspects of health care and uses case studies of people who fall through the cracks to illustrate problems that exist. As this book explains, we have excellent medical facilities in the U.S., but the terrible problem is that many people are denied consistent access to those facilities. Many of the people Cohn uses as case studies die because of lack of access. He provides enough detail about those people to make you see them as real people and thus to empathize with their plights, yet he also provides quite a lot of "technical" detail about health care. If, on the other hand, Cohn had focused totally on the technical aspects and policies, he would have lost everyone but the policy wonks. And if he had focused totally on personal stories, the book would not have been educational enough. Instead he strikes a very good balance between the two. Another neat balancing act that Cohn performs involves solutions to our health care crisis. SICK mainly examines the situation with our health care system, and is not mainly about solutions. There are other books out there focusing more on that. Cohn deals with solutions only in the last chapter, which runs 17 pages. In that space, he clearly advocates a government-run universal health care system. He holds up France as a good model to emulate, where he says there is universal coverage, quick and easy access to care, and overall better results than we get. And yet the French pay far less than we do for health care, as does everyone else in the world! Cohn could have devoted more space to his proposed solution (maybe in a sequel?), but I believe his method of focusing on problems will convince more people of its prudence, since many Americans are opposed to more government intrusion in health care. Everyone who reads SICK must surely conclude that SOMETHING must be done to seriously reform health care in the U.S. If there is some better answer than government-run universal care, what is it, and why hasn't someone done it already? The burden of proof is on the nay-sayers.

Published by Thriftbooks.com User , 15 years ago
I can't recommend this book highly enough. At first glance, one might expect its structure to be gimmicky: 1. Interview someone who suffered because of our country's health-insurance system. 2. Zoom out from that person to explain the political and economic background to his or her suffering. 3. Zoom back in. 4. Repeat 2) and 3) a few times. 5. Move on to the next person and repeat from step 1). Far from being a gimmick, I couldn't imagine a better narrative device. Jonathan Cohn combines the passion of a muckraking journalist with the erudition of a historian. His delivery is simple, unpretentious, and never cloying. His conclusion is simple: health insurance as delivered by private companies doesn't work, because their incentive is always to cut services to the bone; the ideal hospital for an insurer is one that has no patients. The history of health insurance, as Cohn tells it, is the history of nonprofit corporations and idealistic doctors slowly getting replaced by for-profit corporations that destroyed the industry they were ostensibly meant to save. Of course there's a way out; it's the way that every other industrialized nation uses, namely guaranteeing citizens the right to health care as a basic condition of citizenship. They spend far less than 16% of their GDP on health care, which is where the U.S. is today. The main obstacle to universal health care in this country is political. We overcame that obstacle in the Sixties and got Medicare and Medicaid; in Cohn's telling, they are models of efficient health-care delivery. (He says that surveys of the elderly, who are covered by these programs, find that they're more satisfied with their coverage than are young people in private insurance programs.) It will take a political change to bring us universal health care, but we've come close before. There's no reason we couldn't do it again.

Published by Thriftbooks.com User , 15 years ago
The US health care system is not in good shape and this book suggests some of the reasons. 40% of US citizens with problems do not get care due to cost issues. Patient satisfaction is lower in the US than in Canada, the UK and many other countries with some form a national plan. The US spends more than any other country with worse overall results and lower rates of coverage in the population than any other industrial country. We spend less on preventive care as a percentage of expenditures than any industrial nation. In 2004, 35% of Americans believe that the US health care system needed fundamental rebuilding. I could go on, but the clear FACT is that US health care is in bad shape and getting worse quickly for many, many Americans. What is the solution? A single payer system is a good start. Only those ideologically paranoid about government (anyone who still thinks that the current Administration in DC is doing a good job, that global warming is a hoax, and that abstinence only education works is probably in that camp) big pharmacy, big insurance, and affluent folks with good jobs and good insurance disagree. Creating competition on the basis of value (like reduced illness) rather than cost and risk shifting would be a second place to go. Lots of countries have great single payer, national plans that do well. I have lived in some of these places (like Germany) and they are great. Most allow for supplemental and/or private plans at an extra cost (like Japan) but they provide a good base of care for all. Speaking of Germany, they pay about 35% of what we pay for drugs. Like I said, the current system works well... for big pharma! Cohn's book give an excellent historical context for the problem. Greed, ignorance, narrow self-interest, and paranoid account for most of the causes. It is a bit short on solutions (look at Redefining Health Care by Porter and Teisberg) for a good start on that) but it is a good read, a tragic story, and an enlightening book.

Published by Thriftbooks.com User , 15 years ago
The fact of the matter is that the US is the ONLY industrialized nation to treat healthcare as a purchased privelege, rather than a basic human right. The "Healthcare" system in the US is broken, and the truth is that millions men, women, and children are unable to access basic healthcare for the simple reason that they are poor. Furthermore, millions of WORKING americans do not have adequate healthcare coverage. But whether someone is working or not, if you believe that all humans have dignity and therefore entitled to basic human rights, then you must conclude that all americans deserve a quality of life that ensures basic healthcare. Marginalized populations, especially minorities, suffer disproportionately from the effects of being uninsured and the consequences of lack of healthcare. This is an issue of SOCIAL JUSTICE. I doubt that anyone arguing against universalized healthcare is actually unisured. Only those who have the means to benefit from US healthcare voice their opinions against universal coverage. Americans have some of the best doctors and healthcare in the world, IF you can access care. Furthermore, as Americans we have POORER health outcomes and spend MORE money overall on our healthcare system than other industrialized nations like Japan, Germany, France --nations that HAVE universal health coverage. The privitized system of healthcare delivery has been an 80 yr. experiment that has FAILED miserably. It is time to consider other options. Cohn has researched this issue for years, and this book presents the evidence as it is.
Trustpilot
Copyright © 2022 Thriftbooks.com Terms of Use | Privacy Policy | Do Not Sell My Personal Information | Cookie Preferences | Accessibility Statement
ThriftBooks® and the ThriftBooks® logo are registered trademarks of Thrift Books Global, LLC