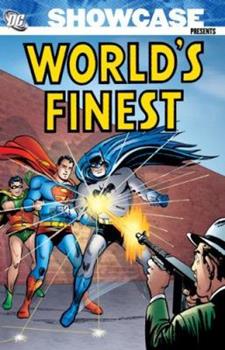 Published by Thriftbooks.com User , 12 years ago
I found this to be among the most entertaining of DC's Showcase Presents volumes to date. Superman, Batman and Robin team up in each story (including their first ever meeting in the pages of a comic book)lasting around 10 to 13 pages each in which they battle aliens, gangsters and even a few battles against classic comic book villains Lex Luthor and the Joker! What's not to like? Most of the art is by Batman legend Dick Sprang with covers by definitive Superman artist Curt Swan.

Published by Thriftbooks.com User , 13 years ago
Unlike some others who wonder why anyone would want to read a color comic collection in black and white I love this collection and all the essentials and showcase stuff. I actually prefer the lack of color, being that the old four-color coloring was so awful, it lets you gain a new appreciation of how good many of the pencillers were without the horrendous four-color drabness killing the clean lines. You can't beat the stories and you can't beat the price.

These Were My Childhood Heroes

Published by Thriftbooks.com User , 13 years ago
There's nothing brilliant in this volume -- no compelling writing nor art that was ahead of its time, no important comic book firsts (beyond Batman and Superman meeting each other), and no first appearances or points of continuity that would matter half a century later. In fact, there's absolutely nothing here of value to the modern day comic book fan. Instead, this is a volume for the old guard, featuring the righteous, morally perfect, fun adventuring iconic heroes of the past with whom we all thought we'd love to share a clubhouse. This volume brings out everything I remember and love about our cherished heroes before they became complicated and human. Here, Superman and Batman are the perfect super buddies, out-thinking the bad guy in the most outrageously impossible of ways, pulling highly unnecessary tricks on Lois Lane, and constantly obsessing over their secret identities (which was one of their most compelling facets to me as a child). Best yet, they took Robin (the kid who represented all of us) along for the ride and often let him play a key role. This clean, silly fun represents the finest example of the care-free comic book adventures that evade a modern age so obsessed with fear and complexity. I happen to love the new stuff too, but there's just no replacing these old yarns.

Some of the "World's Finest" stories are presented here

Published by Thriftbooks.com User , 13 years ago
Most of these stories were drawn by Dick Sprang and Stan Kaye and feature some of the best art of the era in between the Golden Age and the Silver Age. The Club of Heroes is an exceptional story with a great sense of wonder and mystery in a few simple pages, The solution is far-fetched by today's standards, but I was 7 at the time, and it was wonderful storytelling. I also enjoyed the story of Superman's kid pal Skyboy. The Sprang-Kaye splash is exceptional. This is a great example of the innocent age of the fifties for Superman and Batman. Great Stuff.
Copyright © 2020 Thriftbooks.com Terms of Use | Privacy Policy | Do Not Sell My Personal Information | Accessibility Statement
ThriftBooks® and the ThriftBooks® logo are registered trademarks of Thrift Books Global, LLC