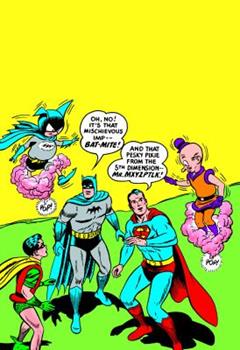 Published by Thriftbooks.com User , 12 years ago
This compilation is excellent. This is what souperhero comics are all about. These are before the "modernization" of classic characters. Before the marketing guys figured how they could capitalize on the wholesomeness of these beloved characters. Before the big and small screen adaptations basically changed what we came to love all those years ago.

"Pardon me if I boot you instead of salute you!"

Published by Thriftbooks.com User , 12 years ago
Any comic featuring Golden or Silver Age Robin is bound to also feature some of Robin's bad puns and quips. This one is from Worlds Finest #119 as Robin kicks the General of the Purple Legion in the teeth. Robin was the character that kids could most identify with and make no mistake, from the "uncomplicated" view of science to the simple morals to the goofy and even repetitive plots; the stories herein were designed for kids. But adults can enjoy them too. They're nostalgic and they're also zany and amusing if you're in the right mood. Basically, the stories involve Batman, Robin and Superman teaming up to defeat some overwhelming menace that they couldn't defeat separately. Robin, though a kid is treated as an equal partner most of the time. He gives and receives respect from adults, which is probably a good lesson for the kiddies. The series also stresses the importance of friendship, not just the fun parts the obligations of being a good friend as well. It's not in color but you get all the stories from World's Finest #112-#145. That's a pretty good deal for the price and if you or your kids find you really enjoy these, then you can always upgrade to the color Archives editions. Here's a breakdown of some of what you'll find inside. **World's Finest #112** The Menace of Superman's Pet! ** Possibly the greatest hero in the history of the universe is a furry little creature named Gleek that looks like a cross between a panda and Peter Lorre. **World's Finest #113** When Bat-Mite meets Mr. Mxyzptlk! ** Wow! This story is worth the price of the book alone. The two reality altering interdimensional imps decide to duel right here on Earth leaving the WF Heroes to deal with the aftermath. This one offers a mother lode of clever imagination, Superman using his hair as a super-mop and a giant, bulletproof crime robot, in addition to the titular twosome. **World's Finest #114** Captives of the Space Globes! ** The Zorons need the WF Heroes help to defeat the evil Baxians and their giant war machines. What will happen when Superman loses his powers? Why, we find out why the heroes make such a great team, that's what. **World's Finest #115** The Curse That Doomed Superman! ** In the first panel Superman, wearing a hubcap on his head, declares himself King of Gotham City. "It's no use Robin" says Batman," He must be under the Swami's spell again." AGAIN!? How often does this happen? **World's Finest #119** The Secret of Tigerman! ** The mysterious Tigerman pushes Superman, Batman and Robin around like they're mops whilst trying to capture the elusive Purple Legion. Who is Tigerman? What does he have on our heroes? Why does the General of the Purple Legion look like Jackie Gleason in a bad doorman's uniform? **World's Finest #123** The Incredible Team of Bat-Mite and Mr. Mxyzptlk! ** The super-imp stalkers are at it again, this time accidentally creating an unstoppable fire breathing, exploding, giant magnetic super-beast bent of planetary des
Copyright © 2020 Thriftbooks.com Terms of Use | Privacy Policy | Do Not Sell My Personal Information | Accessibility Statement
ThriftBooks® and the ThriftBooks® logo are registered trademarks of Thrift Books Global, LLC